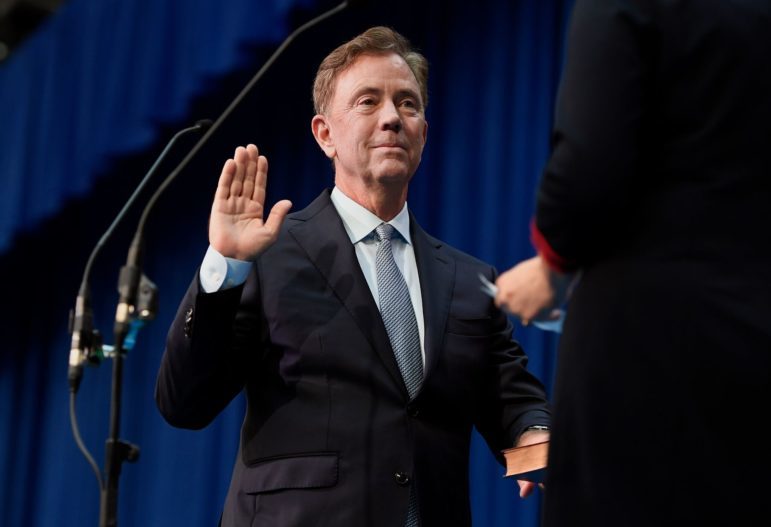 The news centered heavily on the behavior of two powerful leaders last week — behavior that had a dramatic impact on the lives of millions in Connecticut and the rest of nation. One man brought a message of hope, progress and optimism to the state; the other was entangled in a political stalemate that is bringing thousands of Americans the financial uncertainty and suffering of the longest government shutdown in U.S. history.

In Hartford, all eyes were on Ned Lamont last Tuesday when he was sworn in as Connecticut’s 89th governor, and later that afternoon when he delivered – with relish — his first state of the state address. (He did, after all, pay plenty for the opportunity.)

His speech laid out a four-piece plan to rebuild Connecticut’s economy by upgrading the state’s digital infrastructure, investing in its cities, expanding the state’s workforce development efforts and creating a “30/30/30” transit system that requires only 30 minutes travel between Hartford and New Haven, New Haven and Stamford, Stamford and New York’s Grand Central Station.

(For his part, the new governor and his wife, Annie, a venture capitalist, will be figuring out how often to commute from their home in Greenwich – the one with all the bathrooms—and the governor’s mansion in Hartford.)

Lamont’s upbeat approach was, for the most part, received favorably if cautiously by business representatives and labor, given that the governor’s task will be to solve a major budget deficit with input from “everybody.”  He won’t say for sure until next month, but “everybody” will probably include unionized state employees and municipalities.

The newly seated legislature will also weigh in on that, of course, and will try to mesh its members’ vision with Lamont’s – or at least the heavy Democratic majority will. (This, for now, includes Rep. Philip Young of Stratford, whose election has been contested and is being reviewed by a special bipartisan House panel.)

The outnumbered Republicans, while promising to support diversity and inclusion, will still be focused on shrinking state spending, which they identify as the government’s “underlying financial problem.”

Some of the new legislators will be closer to the Lamont administration than originally thought – since he hired them. Special elections will be held Feb. 26 to fill those newly created vacancies.

Lamont also named Vanessa Dorantes, a veteran social worker and regional administrator with the Department of Children and Families, to run that agency; and three others to help lead the Office of Policy and Management.

But while much of Connecticut celebrated a time of transition and potential, some people continued wringing their hands over the destabilizing repercussions the partial government shutdown was having on their livelihoods and families.

As President Donald Trump and U.S. House Democrats remained locked in their standoff over Trump’s insistence on money for a southern border wall, legislators like Sen. Chris Murphy scrambled to make their positions clear and to protect their constituents against some of the shutdown’s harmful effects. And though Congress approved several bills paying for border security improvements as part of a bid to reopen the government, Democrats — particularly Speaker of the House Nancy Pelosi — were adamant that there will be no money for a wall.

Various federal agencies, meanwhile,  were also trying to prevent a cutoff of food stamps, for example, and warning that longer-term problems in housing, among others, could be coming if the shutdown extends.

Trump, for his part, paid a visit to the border, made a series of false claims about the number and nature of border crossings, and considered declaring a “national emergency” as a means of skirting Congress and getting the money he wants for the project, his signature campaign promise. His televised speech Tuesday to the nation from the Oval Office was a reiteration of his main talking points and, predictably, drew harsh criticism from Democrat Sen. Richard Blumenthal, who said Trump “continued to protect his own ego and pander to his base through falsehoods and xenophobic anecdotes.”

Friday, the New York Times distracted the president from his wall fixation by publishing a story that said the FBI had opened a counterintelligence investigation of the president, fearing that his actions with respect to Russia were a threat to national security.