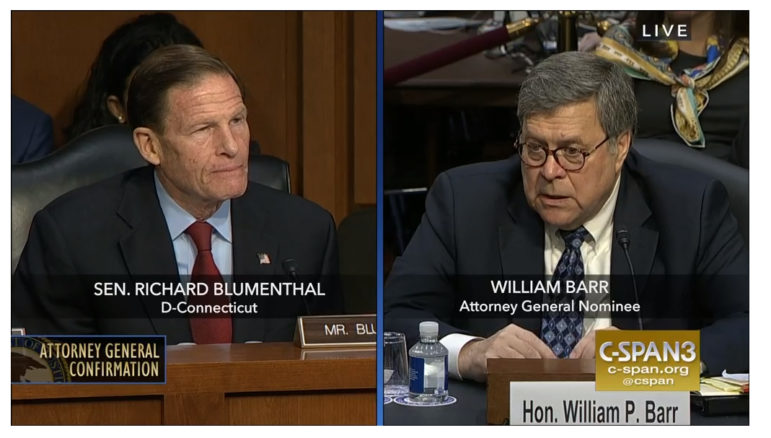 As he had when asked similar questions by other Democrats on the Senate Judiciary Committee during his confirmation hearing for Attorney General,  Barr deflected the question during a tense exchange.

“Okay, well under the current regulations, the special counsel report is confidential and the report that goes public would be a report by the attorney general,” Barr said.

“Will you commit that you will explain to us any changes or deletions that you make to that special counsel report that’s submitted to you in whatever you present to us?” the Connecticut senator asked.

Barr did not commit to explain to Congress “any deletions or changes” he made to Mueller’s report before it was released.

Barr is Trump’s choice to replace Acting Attorney General Matthew Whitaker, whom Blumenthal and other Democrats have criticized as unfit to hold the job of the nation’s chief law enforcement officer.

But Barr, who served as who served as U.S. Attorney general during the George H. W. Bush administration, also holds an expansive view of executive power, something that concerns Democrats.

The nominee also holds other positions Democrats don’t like.

During his confirmation hearing, Barr said he would consider jailing journalists for “putting out stuff that they know will harm the country.”

Barr also said he supported Trump’s intention of building a border wall between the United States and Mexico and would seek to punish so called “sanctuary cities” that withhold information about undocumented immigrants who have committed crimes, even those that do not warrant reporting under current law, to federal authorities.

Republicans on the panel, meanwhile, largely praised the nominee.

During a break in the hearing,  Blumenthal told reporters he had not made up his mind on whether he’d vote for Barr’s confirmation.

“I have made no decisions whether I will vote on this nominee,” he said.

To win his support, Blumenthal said Barr “has to be very specific and strong about transparency” of the Mueller report.

Blumenthal also said the public needed to know all of the details of Mueller’s findings because  “there is a credible case of obstruction of justice against the president of the United States.”

During his questioning, Barr declined to pledge to Blumenthal that he would not intervene in the investigations into Trump being run by the Southern District of New York, the Eastern District of Virginia, and other federal courts.

Barr said that he “would not stand by and allow a U.S. attorney to be fired for the purpose of stopping an investigation” – but added that Trump “is free to fire his officials that he’s appointed.”