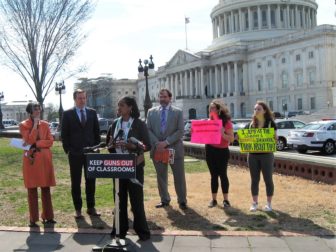 Washington – On the same day the Connecticut Supreme Court issued a historic ruling allowing a lawsuit by victims of the Sandy Hook Elementary School shooting to move forward, Connecticut lawmakers introduced resolutions that aim to block the use of federal education grants to arm teachers.

Sen. Richard Blumenthal called the state Supreme Court’s 4-3 decision to overturn a lower court dismissal of a case against Remington Arms and other gun manufacturers “a bombshell victory.”

Sen. Chris Murphy said allowing the gun liability case to move forward, even if the Sandy Hook victims eventually lose the case, will provide a wealth of information through the legal process of discovery about how the industry markets its products.

“Discovery alone could be damaging to the gun industry,” Murphy said.”It will teach us a lot about how the gun industry took a weapon that was designed for military use and put it in the hands of Adam Lanza.”

Lanza, the shooter who killed 20 first graders and six educators, fired a version of the AR-15, a semi-automatic rifle.

But the senators’ chief purpose in holding a press conference Thursday was to introduce a resolution that would clarify that federal education dollars can’t be used by schools to arm teachers.

The U.S. Department of Education has declined to say whether recipients of Student Support and Academic Enrichment Grants, which are controlled at the district level, can’t be used to arm teachers. The grants can be used for a wide variety of purposes including promoting school safety so that students are “free from violent and disruptive acts.”

Randi Weingarten
President of the American Federation of Teachers

Proponents of arming teacher say that means the money can be used for purchasing guns and training teachers how to use them.

But Democrats like Blumenthal and Murphy say the same section of the law that established the grants also prioritizes “the creation of a school environment that is free of weapons.”

Murphy said the resolution would make it perfectly clear that the education grants can’t be used to arm teachers.

“Teachers have way too much to do,” Murphy said. “They don’t have to be marksmen.”

Rep. Jahana Hayes, D-5th District, introduced companion legislation in the U.S. House Thursday, the first time the freshman lawmaker is the original sponsor of a resolution.

“The idea coming out of this administration to possibly arm teachers is just wrong,” Hayes, a former teacher, said.

Hayes, who is married to a police officer, said she is concerned first responders at a school shooting will spend crucial minutes trying to determine “is this an active shooter or is this a teacher?”

Randi Weingarten, president of the American Federation of Teachers, said her union is backing the Murphy-Hayes resolutions.

A school safety report by a commission chaired by Education Secretary Betsy DeVos that was released in December lauds various state programs that arm teachers.

Nine states, including Texas, Arkansas and South Dakota, arm schoolteachers. But none of them, as of yet, are using federal funds to do so.

Murphy and Rep. Rosa DeLauro, D-3rd District, members of Appropriations Committee in the U.S. Senate and U.S. House, said they would also try to include language in spending bills that fund the U.S. Department of Education making it clear that federal dollars can’t be used to arm teachers.

Murphy said he hopes to win GOP support for his resolution in the Senate which, unlike the House, is still in Republican hands.

“Republicans understand that the world has changes and the NRA is no longer in charge of this place,” Murphy said.