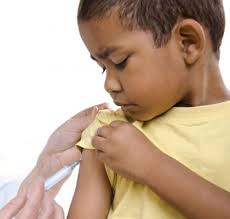 Connecticut children are still vaccinated at a higher rate than the national average, but the number has dropped in recent years — with most of the state’s unvaccinated children avoiding immunizations by claiming a religious exemption.

The drop off in immunizations follows a national trend that concerns doctors, health insurers and school administrators and is prompting states like Connecticut to weigh taking action.

According to information from the Connecticut Department of Public Health, 98.8 percent of Connecticut’s kindergarteners were immunized against measles, mumps and rubella in the 2013-2014 school year. That dropped to 96.5 percent last year.

Vaccinations of kindergarteners for diphtheria, tetanus, and acellular pertussis, commonly known as whooping cough, dropped from 98.8 percent in the 2013-2014 school year to 96.5 percent in the last school year.

Most of those unvaccinated children — 78.8 percent — were not immunized for what their parents said were religious reasons. The rest, about 21.2 percent, were not vaccinated for medical reasons.

Even with the drop in vaccinations, the immunization rate of children in Connecticut is higher than the national average. According to the Centers of Disease Control and Prevention, median vaccination coverage nationwide was 94.3 percent for measles, mumps and rubella and 95.1 percent for diphtheria, tetanus and whooping cough for kindergarteners in the 2017-2018 school year.

Doctors in the state, however, are concerned about the downward trend.

“Clearly any drop off is concerning … Some kids have died,” said Robert McLean, an internist who practices in New Haven and is the incoming president of the American College of Physicians.

Jillian Wood, executive director of the CT Chapter of the American Academy of Pediatrics, said, “There is a concern that exemptions are going up, even if they go up a tiny little bit it makes a difference.”

The measles virus, for example, is extremely contagious, but is also considered extremely rare because the disease is easily preventable through vaccination.  Yet an increase in anti-vaccination movements across the country and even in other parts of the world has left children unprotected and vulnerable to the infection.

The anti-vaccine movement has spread on social media, experts say, because personal anecdotes are more compelling than medical studies that say vaccinations have nothing to do with autism or risks for other diseases.

McLean said concerns about the anti-vax movement prompted the American College of Physicians to adopt a policy in the summer of 2015 calling on all states to drop exemptions parents can use to avoid vaccinating their children — except for medical reasons.

Some Connecticut lawmakers agree and are considering introducing measures that would prohibit children who are not vaccinated on religious grounds from enrolling in the state’s public schools. Some say that people with philosophical objections to vaccinations are wrongly using the religious exemption.

The science of vaccines will be explored at the Legislative Office Building in Hartford on Tuesday at a roundtable discussion featuring Yale scientists, including an epidemiologist with an expertise in the effectiveness of vaccines. A dissenting voice on the panel will come from Robert F. Kennedy Jr., an environmental lawyer and vaccine skeptic.  Kennedy will hold a press conference later Tuesday.

The state’s health insurers have also weighed in on the debate.

During a hearing in the Senate Health, Education, Labor and Pensions Committee earlier this month America’s Health Insurance Plans submitted testimony that said vaccinations eliminated polio in 1979 after the vaccine against that disease became widespread.

While Connecticut allows exemptions for religious reasons as well as medical reasons, other states allow philosophical and personal exemptions, too.

Like other doctor organizations, the American Academy of Pediatrics is urging states to eliminate all but the medical exemption, and limit that one to cases where they believe a vaccine might do harm, mainly those with impaired immune systems who suffer from cancer or other diseases.

Those who oppose vaccinations base their argument on individual rights. They insist parents, not the government, should decide whether to vaccinate their children.

A backlash against vaccine critics

According to the CDC, measles was eliminated in the United States in 2000. But the CDC reports that 268 individual cases of measles have been confirmed in 15 states, including Connecticut, from Jan. 1 to March 14 of this year.

Not even four months into this year, Connecticut has already reported two cases of measles to the CDC.  Three cases were reported in the 12 months of 2018.

Most of the recent measles outbreaks in the United States were the result of a traveler bringing the disease home with them from overseas. The virus then spread through the unvaccinated people in the travelers’ communities.

In 2018, the United States experienced 17 measles outbreaks, with New York and New Jersey contributing most of the cases.

Those outbreaks were linked to someone who brought measles back from Israel, where a large outbreak was occurring.  The disease then spread mostly through unvaccinated Orthodox Jewish communities in New York and New Jersey.

The resurgence of measles in the United States is spurring a backlash against vaccine critics, from congressional hearings investigating the spread of vaccine misinformation to state measures that would make it harder for parents to opt out of immunizing their children.

In Washington state, where the worst measles outbreak in more than two decades sickened nearly 70 people, two proposals are advancing through the state legislature that would bar parents from using personal or philosophical exemptions to avoid immunizing their school-age children

In  Vermont and New York, legislators have introduced similar measures.