Lawmakers say a plan to legalize recreational marijuana doesn’t have the votes needed to clear the state House.

Proponents of the ambitious effort to legalize recreational marijuana are exploring a fallback now that it appears they don’t have the votes for passage — placing the issue on the ballot next year in the form of a constitutional amendment.

The move, though cumbersome, would put the decision squarely in the hands of voters, the path to legalization taken in Colorado and Massachusetts. But unlike Connecticut, those states allow citizens to petition for referendums on proposed laws.

“It’s an interesting idea that we’re talking about,” House Majority Leader Matthew Ritter said. “In the states that have legalized it, it has been done mostly through direct initiatives or constitutional amendments and a referendum vote.”

Legislators said Monday that after a House Democratic caucus meeting, it became clear supporters didn’t have the votes necessary to advance the proposal. Three separate bills passed out of committees this year – one that would lay the foundation for a marijuana industry in Connecticut, another that would erase the criminal records of people who have committed low-level drug offenses, and a third that deals with taxation and distribution of the revenue. Prior to a General Assembly vote, lawmakers planned to combine the three into a single omnibus bill.

“I don’t see a path to getting it passed,” said State Rep. Josh Elliott, a key backer of the effort. “So we started toying with the idea of, ‘What does it look like if we just put this up as a ballot initiative?’ And I think that is going to be the only way for us to get it done.”

Elliott said it was probably too late to introduce the new take on legalizing the recreational drug this session. But a handful of proponents have begun batting around the idea for next year.

Amending the constitution is not simple. Legislators would have to pass a resolution allowing the proposal to appear on the ballot. How quickly it goes to a referendum depends on how much support the measure gets.

If three-quarters of both the House and Senate endorse a resolution, it is placed on the ballot in the next biennial state election.

If both chambers pass the measure, but at least one does so with less than a 75 percent endorsement, then it must be referred to the 2021 session of the legislature. If it passes in that session by a simple majority, it would appear on the 2022 general election ballot.

From there, a majority of voters must sign off on the amendment for it to become part of the state constitution. 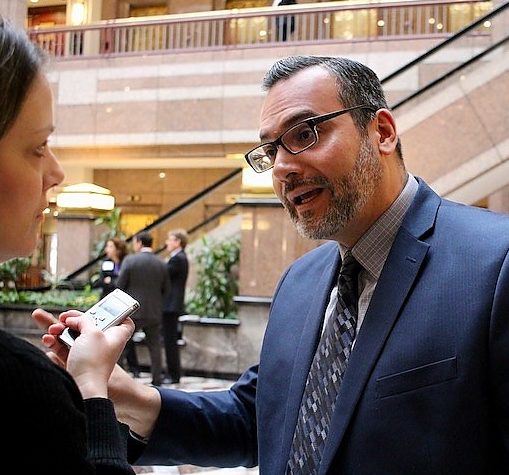 State Rep. Juan Candelaria and other supporters are considering placing the issue on the ballot next year.

“We did a vote count and based on the feedback we got, the votes were not there to pass it,” he said of House Democrats, which make up the majority of the chamber. “Some are concerned because they’ve been receiving pressure from the faith-based community in their neighborhoods and they’re holding off on supporting the measure.”

After the vote tally, questions were raised about the feasibility of placing the proposal on the ballot in an upcoming election. Candelaria said it’s too early to gauge whether the suggestion would catch fire, but he’s in favor.

“We’re already thinking about Plan B,” he said. “This removes it from the legislature and puts the burden on the voters. I feel that my colleagues would be more accommodating … of the measure in a constitutional amendment because it puts the ownership on the voters.”

Some legislators, including Sen. President Pro Tem. Martin Looney, have suggested the marijuana proposal may come up in a special session. The regular session adjourns June 5.

But proponents said the effort was losing momentum with each passing week.

“We’re late in the game,” Candelaria said. “If we don’t do anything this week, it’s going to be very difficult.”