Lamont endorses Biden as other Dems wait and watch 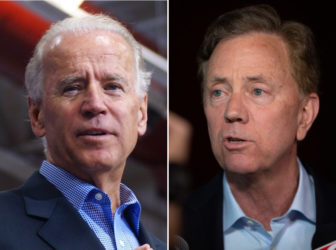 Washington – Gov. Ned Lamont broke with most of the nation’s top Democrats by throwing his support on Tuesday to one of the many candidates in his party running for the White House – Joe Biden.

“Joe has spent his entire life fighting for hard working American families. That’s the kind of President we need now more than ever,” Lamont said in a Tuesday morning Tweet.

While Lamont has made an early endorsement in the crowded Democratic contest of more than 20 candidates vying to unseat President Donald Trump, none of the seven Democrats in Connecticut’s congressional delegation has made their preference public.

“I’m friends with some of the candidates and admire most of them,” said Rep. Joe Courtney, D-2nd District.

Courtney said he wanted to “let the process unfold,” and make his choice after the early presidential primaries at the beginning of next year in Iowa, New Hampshire and South Carolina.

Lamont chose not to wait.

Last year, Biden came to Connecticut to campaign for Lamont. Tuesday, the governor said he is grateful for the help.

“When my campaign needed a final push last fall, @JoeBiden was there,” Lamont tweeted. “I’ve gotten to know him more over the years and now, I’m grateful that he’s thrown his hat in the ring to run against President Trump.”

It’s politically dicey for the members of Connecticut’s congressional delegation to choose a favorite, especially this early in the race.  Like Courtney, they have political allies among those running.

Sen. Richard Blumenthal, D-Conn., for instance, is a member of the Senate Judiciary Committee and works alongside three Democrats on the panel who are running for the White House — Sens. Kamala Harris of California, Amy Klobuchar of Minnesota and Cory Booker of New Jersey.

Sen. Chris Murphy, D-Conn., once jokingly asked reporters if  he could “endorse them all.”

“Can they all be president? Could I endorse them all?” Murphy said, adding that he wants to “stay out of it for as long as possible.”

But some members of Congress have made an early endorsement. In those cases, the lawmakers usually hail from the candidates’ home states.

Sen. Bob Menendez, D-N.J., was the first senator to endorse a colleague in February when he backed Booker.

Lamont made his endorsement a day after a CNN poll showed Biden’s commanding lead eroding. The poll showed Biden is still the favored Democratic candidate, with support from 22 percent of the respondents, but indicated Harris had surged to 17 percent among Democrats and Democratic-leaning independents who are registered to vote.

Warren placed third in the CNN poll with 15 percent, followed by Sanders at 14 percent.

Biden’s slip in popularity, and Harris’ rise, has been attributed to the attacks Harris leveled at the former vice-president during last week’s Democratic debates. Harris confronted Biden over his opposition in the 1970s to government-mandated busing of children to integrate schools.

Despite Biden’s slip in popularity, several polls –including one released by Quinnipiac University on Tuesday — show he’s still the overwhelming choice when respondents are asked which Democratic candidate they think is more likely to defeat Trump.

Quinnipiac’s surveyed Democrats and Democratic-leaning independents were asked which candidate they thought had the best chance of winning against Trump in the 2020, regardless of who they support in the primary. Biden topped the field with 42 percent, a drop from the 56 percent that he received on a similar poll in April.

Harris came in a distant second with 14 percent in the university’s latest poll, up from 2 percent in April. Sanders received 13 percent, and no other candidate reaches double digits.

Courtney said “people are strictly pragmatic about this election,” and that he hasn’t seen Democratic voters apply “a lot of litmus tests” to the candidates that would limit them to endorsing only candidates that shared all of their political positions.