Q-poll: Half of American voters say Trump is a racist 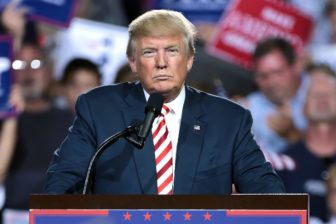 Nationally, 51 percent of those polled said Trump is a racist, and 45 percent said he is not.

The Quinnipiac poll, conducted  just after former special counsel Robert Mueller testified to Congress about his investigation of Russian meddling in U.S. politics, also showed a vast majority of Americans continue to be opposed to the impeachment of the president.

Sixty percent of voters said Congress should not begin impeachment proceedings against Trump.  But those numbers flip among Democrats and black voters.

While most Americans opposed beginning impeachment proceedings, respondents said — 52 – 40 percent — that Trump did attempt to “derail or obstruct” the investigation into the 2016 election, while 56 percent of those polled said that Mueller’s final report did not clear the president of any wrongdoing.

And, the poll found that 71 percent of American voters are “very concerned” or “somewhat concerned” that a foreign government may try to interfere in the 2020 elections.

The poll’s latest findings track earlier surveys by the university.

“When it comes to the Mueller hearings, minds were not changed on impeachment or that President Trump was cleared of wrongdoing,” said Quinnipiac pollster Mary Snow.

In Connecticut, only one lawmaker, Rep. Jim Himes, D-4th District, has joined the ranks of House Democrats who support impeachment or beginning the impeachment process through a congressional inquiry of the president’s conduct.

Rep. John Larson, D-1st District, said Tuesday he’s “in total agreement” with House Speaker Nancy Pelosi that House Democrats should shun impeachment in favor of its oversight role on the Trump administration while devoting its efforts to working on infrastucture and health care issues that are important to Americans.

“They are kind of fed up with the (partisan) back and forth,” Larson said of American voters.

The Quinnipiac poll also showed there’s a huge opinion gap between white and black voters and between men and women when it comes to Trump and racism.

Meanwhile, 55 percent of men said Trump is NOT a racist, while 59 percent of women said he is.

“We are seeing these big gaps,” said Snow.

But Americans said, 51–35 percent, that conditions in immigration detention centers are “inhumane.”

Quinnipiac surveyed voters after Trump made inflammatory comments about four Democratic freshmen lawmakers who are women of color. The poll also surveyed voters over the weekend, after Trump made disparaging remarks about Baltimore, the city’s majority black population, and U.S. Rep. Elijah Cummings, D-Md., who has represented the city in congress since 1996.

Despite those controversies, the university’s latest polling on the president and racism does not differ much from two polls Quinnipiac conducted last year that showed 49 percent of respondents believed Trump was a racist.

But Snow said there has been some movement within subgroups surveyed, with independents now more likely to say the president  is a racist (59 percent) than they were last year and Republicans more likely to say he is not (91 percent.)

Quinnipiac University surveyed 1,306 voters nationwide and its poll has a margin of error of plus or minus 3.4 percent.