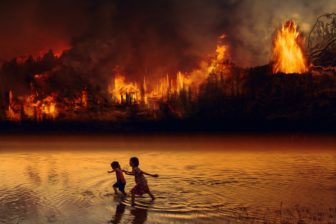 A majority of registered voters nationwide, 56%, say that climate change is an emergency, while 42% do not.

Voters also told pollsters the United States isn’t doing enough to address climate change, with 67% of voters saying more needs to be done. That’s a new high since the question was first asked by Quinnipiac pollsters in December of 2015.

“As fires in the Amazon rain forest serve as just the latest concern about the planet, there is a sense of urgency about climate change among American voters,” said Mary Snow, polling analyst for the Quinnipiac University Poll.

The poll was released as President Donald Trump on Thursday announced plans to roll back regulations on the emission of methane, a major contributor to climate change.

The poll also showed attitudes towards gun control are shifting as mass shootings in the United States continue to claim lives.

Seventy two percent of those polled, including 50% of Republicans, 93% of Democrats, and 75% of independents, said Congress needs to do more to reduce gun violence.

There is also strong support, 82%, to require a license to purchase a gun and for a federal  “red flag” law like the one in Connecticut that allows the temporary confiscation of weapons from those determined to be a danger to themselves or others.

A majority, 60%, of those polled backed the reinstatement of a federal ban on semi-automatic “assault” style weapons, a ban that expired in 2004.

But there is not majority support for a mandatory federal program to buy back of assault weapons purchased before a new ban takes effect. Forty-nine percent of those polled opposed such a program.

While the Quinnipiac poll determined that a majority of American voters disagree with  the National Rifle Association’s opposition to an expansion of background checks, red flag laws and assault weapons bans, the poll showed that the NRA’s argument that mental illness, not the prevalence of guns, is responsible for mass shootings has some resonance.

The debate over guns is expected to resume when Congress returns from its summer break the second week of September. The Democratic-led House has approved two bills that would expand FBI background checks of prospective gun buyers, but the GOP-majority Senate has failed to act on either piece of legislation.

Members of the House Judiciary Committee are returning to work a week early to try to advance an assault weapons ban and other gun-related legislation.

But like the background check bill, those fate of those bills lies with a Senate that has shown little inclination to consider gun legislation.

The Quinnipiac poll also determined 64% of voters believe the level of hatred and prejudice in the United States has increased since the 2016 election, with 28% saying it hasn’t changed, and 6% saying it has decreased.

Prejudice against immigrants is a “very serious problem” in the United States today, 51% of the respondents told the pollsters, while 23% said it is a “somewhat serious problem.”