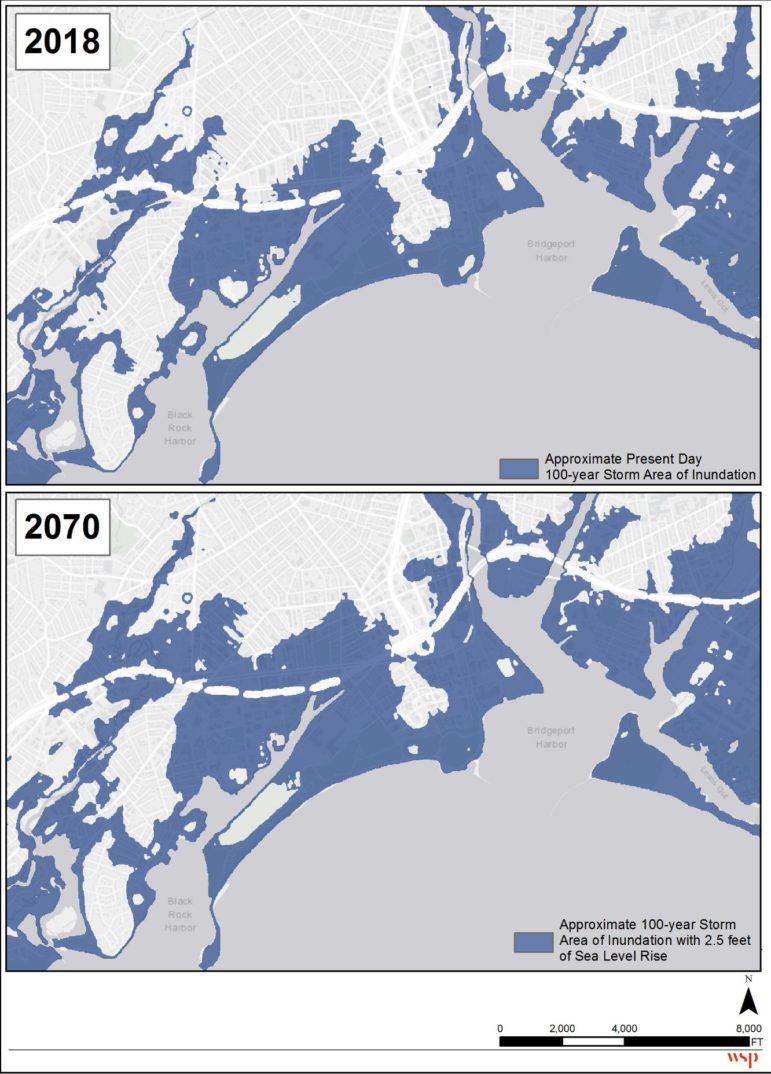 Resilient Bridgeport and other parts of the city shown now and in 2070 with 2.5 feet of sea level rise.

Editor’s Note: This is the fifth of six stories exploring how Connecticut is grappling with the effects of climate change, one small solution at a time.

Bridgeport has seen the face of climate change and it is wet.

The city’s south end had a gulp of that when it was swamped by Tropical Storm Irene 2011, followed by Sandy a year later – both likely intensified by climate change. Among the hardest hit – low income and public housing neighborhoods.

In the aftermath of those two storms, Bridgeport took the lead in Connecticut’s attempts to participate in two federal recovery programs, competing for funds in Rebuild by Design (RBD) and the National Disaster Resilience Competition (NDRC).

The big bucks went elsewhere, but Bridgeport did come up with some money: $10 million through RBD and $54.3 million through NDRC. Seven years later, the city is coming closer to getting shovels in the ground on projects that will better enable it to withstand the effects of sea level rise caused by climate change.

Earlier this month the final environmental impact statement for the projects – now jointly known as Resilient Bridgeport – was released by the state’s Department of Housing. After 30 days for public comment, a final agreement will be in place in late October. Work should begin by next spring, said Rebecca French, director of resilience for DOH.

“The final EIS is a big milestone. Completing the environmental review process unlocks funding for final design and construction,” she said, noting that, under program guidelines approved by Congress, all funding must be spent by Sept. 30, 2022. This is admittedly a tight deadline, but French said the construction plan meets it, and given the high level of community involvement in the plans, there are likely to be few objections.

“Community participation has been significant. I don’t think there’s ever been a project in the state of Connecticut that has been this heavily vetted by the community,” French said.

While Resilient Bridgeport is vastly scaled back from early proposals that would have redesigned huge portions of the city to cope with climate change, it addresses some of the most pressing concerns through three components. 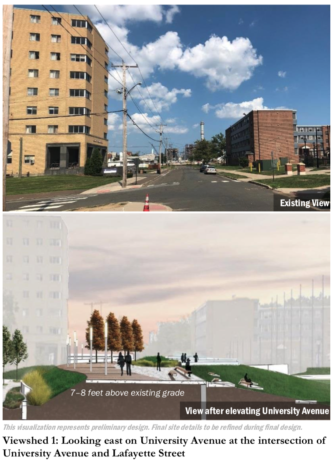 Under the plan, University Ave. would be elevated 7-8 feet, functioning as a berm to keep flooding out, but also providing pedestrian-only, easy access.

One is the RBD portion at Marina Village, the public housing area that flooded dreadfully in the storms, but also has chronic flooding because it is low-lying and near the coast. The plan elevates roads, creates a stormwater park to gather and drain water, and provides dry access routes for emergencies. Marina Village will also be rebuilt, but that is being handled by the city with separate funding.

Another component is a resilience center that will act as the informational access point during emergency events like Superstorm Sandy. Those details are still being worked out.

The most ambitious and far-reaching component is a massive flood risk reduction project on the east side of the South End. The final EIS chose what French called the preferred alternative for what is essentially a flood wall that wraps around the neighborhood – in some places a visible wall, in other places cleverly hidden.

French considers it the most unique part of the project – combining protection and esthetics.

“It’s going to take the largest area out of the floodplain,” she said. “It’s about reducing flood risk and maintaining the health and safety of the community, but doing it in way to blend into community using urban design concepts,” she said.

In the University of Bridgeport area, for example, it will look like a landscaped berm that will be easy for people to walk across where the road enters Seaside Park.

The project also includes a pump station to eliminate water that might collect behind the berm from storm surges or heavy rains. And the combined sewer overflow that for generations has spilled sewage into Long Island Sound at times, would at long last be separated. Green infrastructure would also be used to supplement new drainage systems.

The protective wall is designed to accommodate 2.5 feet of sea level, which may not ultimately be enough, but the features are designed for adaptation beyond that, French said.

What worries her is time.

“What keeps me up at night is that it’s hurricane season,” French said. “That neighborhood got hit in Irene. It got hit in Sandy. It could get hit again. We don’t frequently get hurricanes, but it’s not if, it’s when.”