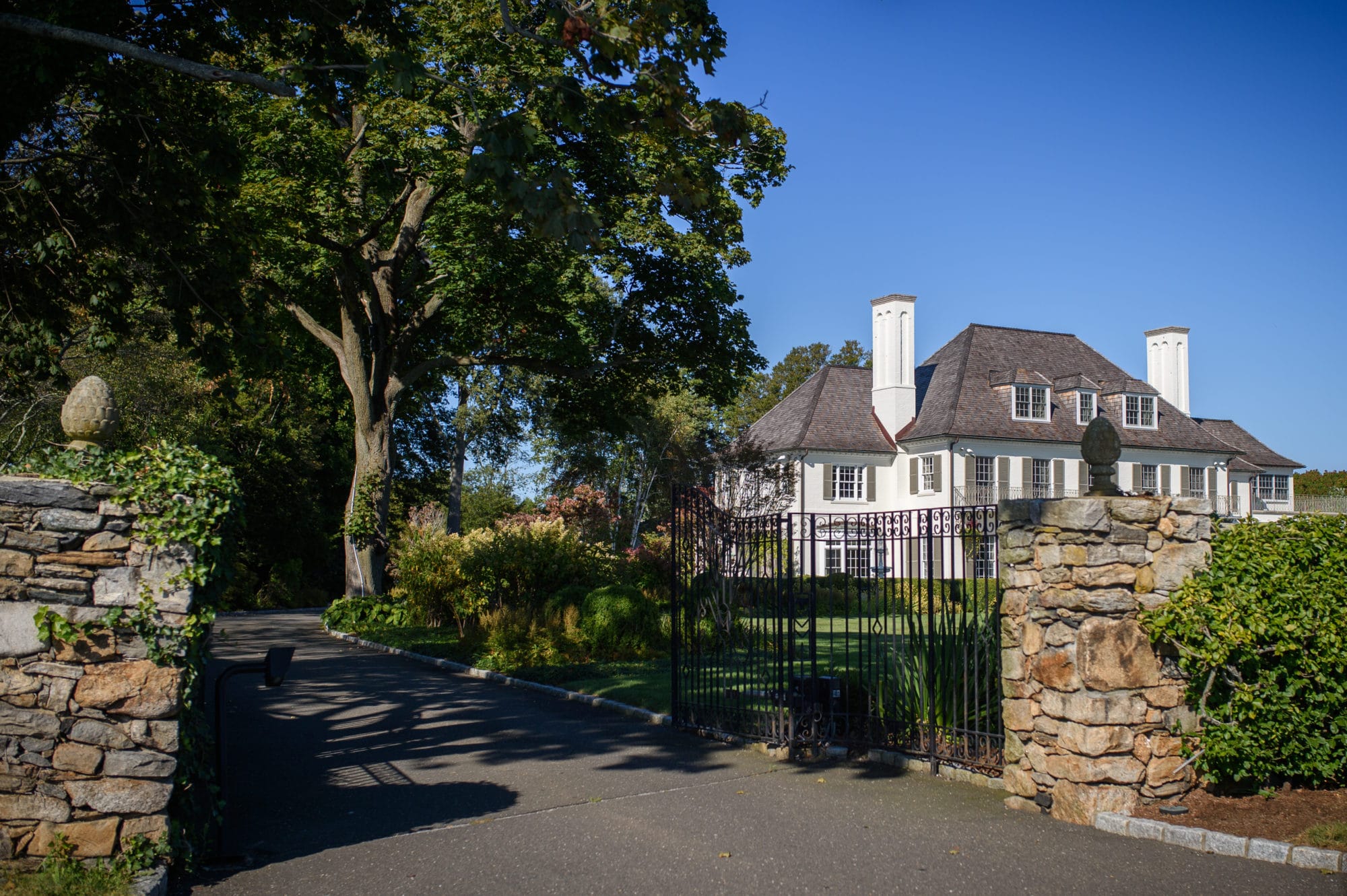 A gated mansion in Westport, where 3.4% of housing is considered affordable.  |   photo by: Monica Jorge :: Special to CT Mirror

This article was produced through a partnership between ProPublica and the Connecticut Mirror, which is a member of the ProPublica Local Reporting Network.

Westport — For much of the past 13 years, attorney Timothy Hollister has battled local elected officials here on behalf of a developer who wants to build more affordable housing in one of America’s wealthiest towns.

The fight, he has said, is a microcosm of a statewide debate in Connecticut, where exclusionary zoning requirements have resulted in some of the most segregated neighborhoods in the nation. Private developers have been allowed to open just 65 affordable housing units in this posh village over the last three decades. 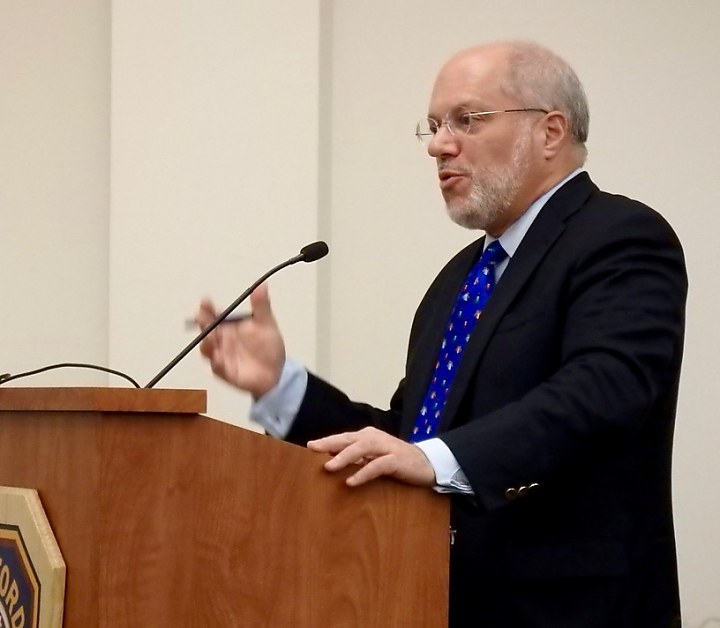 Attorney Timothy Hollister at a zoning hearing in 2018.

“Does anybody say we need to keep blacks and Hispanics out of Westport? No, but they talk about property values, safety and preserving open space — all the things that a town can do to prevent development that would bring up a more economically and racially diverse housing population,” Hollister told the Connecticut Mirror and ProPublica in May, as part of an investigation into the state’s housing practices. “They don’t use the overt racial terms, but it’s absolutely clear to everybody in the room that’s what they’re talking about.”

Citing the attorney’s “inflammatory and insulting” remarks, as well as other actions he had taken on behalf of his client, town leaders voted to request that the local Board of Education sever its 30-plus-year relationship with Hollister’s firm, Shipman & Goodwin. That contract is worth more than $200,000 annually to the law firm.

“S&G cannot have it both ways.”

Westport Board of Selectmen

“S&G cannot have it both ways,” the town’s two Republican selectmen and their Democratic colleague wrote to the school board, referring to the firm’s work for Summit Development LLC, a developer that is seeking to build a 187-unit apartment complex a half-mile from the local train station. Fifty-seven of those units would be reserved for low-income residents. Town officials said the firm’s “dual representation” constitutes a conflict of interest.

Attorneys at the firm declined to comment for this article.

Westport is the second Connecticut town this year seeking to pressure Shipman & Goodwin to abandon its affordable housing work — or risk losing the local school system as a client. In January, after Newtown’s first selectman claimed the law practice had a conflict there, Hollister and another developer parted ways. Leaders from both towns say it’s a matter of economics: firms that reap public dollars should not harm those same local governments with costly lawsuits.

But with Shipman & Goodwin representing two-thirds of the school districts in Connecticut — including those located in the state’s nine wealthiest municipalities, which also have limited affordable housing — civil rights and housing advocates worry the moves represent an emerging strategy to freeze affordable housing.

How some of America’s richest towns fight affordable housing

“What does it say to people who are trying to build in communities like Westport who are very well resourced? I think this says that we will go so far as to deprive you of your lawyers, the best lawyers,” said Peter Haberlandt, senior legal counsel for the civil rights organization Open Communities Alliance and former legal affairs director for the state Education Department.

In representing both the school board and the developer, Shipman & Goodwin appears to be on solid legal ground. The Connecticut Bar Association’s Committee on Professional Ethics has determined that such arrangements are permissible because the town and the school board are separate legal entities.

But, over the past few months, the law firm has sought to make amends with the town. Hollister apologized, and Shipman & Goodwin took the extraordinary step of giving Westport an effective veto over its future affordable housing clients. In a letter to local officials last month, attorney Thomas Mooney, who represents the town school board, said the firm, “out of respect for our relationship,” would never again take on a client challenging a land-use decision without written permission from town leaders. However, for ethical reasons, the firm could not drop its current client that has been trying to build affordable housing in town for the last 13 years, he wrote.

The firm followed up the written apology with a personal visit to last week’s selectmen’s meeting by managing partner Alan E. Lieberman, who reiterated the firm’s remorse.

“It was undoubtedly deeply hurting and obviously very inflammatory,” Lieberman said of Hollister’s remarks, “and we understand the reaction from the town.” 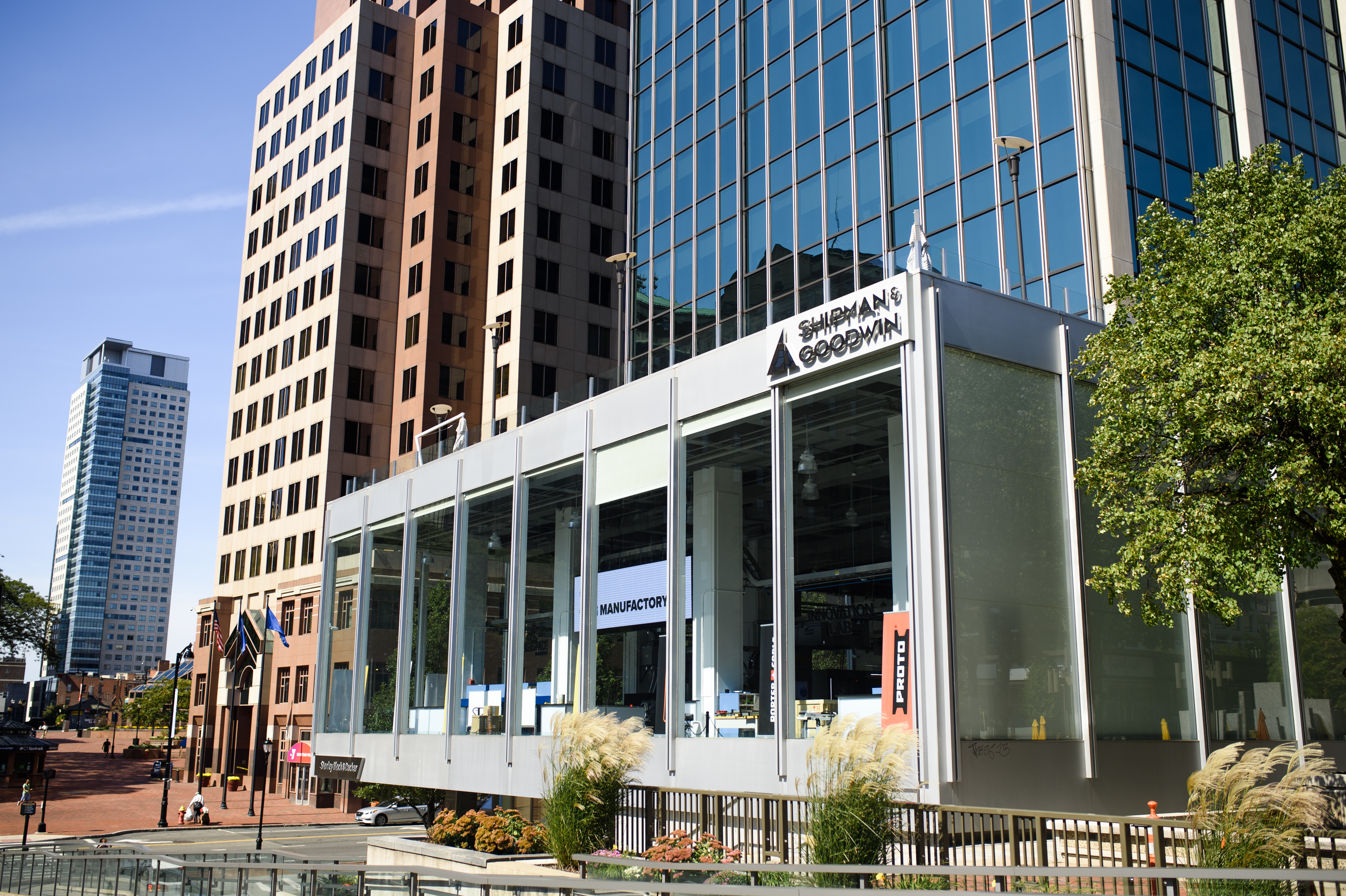 The law offices of Shipman & Goodwin. Westport’s leaders have requested the Board of Education sever its more than 30-year relationship with the law firm.

The lawyer said the decision to no longer represent affordable housing developers was hard for his firm because it could set a precedent.

For town officials, though, the deal wasn’t enough.

“In my view, this is about a business relationship between an entire professional development firm and the taxpayers and residents of the town of Westport,” Jim Marpe, the town’s Republican first selectman, said during the special meeting last week. “The taxpayers and the residents in the end are the real clients of Shipman & Goodwin.”

“Let’s not be fooled: This action was not about one specific development. This looks like an effort to thwart affordable housing more generally.”

At issue is a state law that allows developers to circumvent local authorities by going to court when developments are denied if less than 10% of a town’s housing is dedicated for low- and moderate-income residents. Westport, where 3.4% of the housing is considered affordable, won a waiver from that law this year, arguing that it had made a good-faith effort to build affordable housing.

The town’s Planning and Zoning Commission then denied Summit Development’s application, in part citing Westport’s exemption from the affordable housing law. The waiver, officials said, stands as proof that the town doesn’t need such a development.

Hollister, in turn, appealed that exemption with the state Department of Housing and then filed a lawsuit last month after the state agency denied his request.

“The bottom line is Westport’s inventory of affordable housing addresses a fraction of its needs,” said Summit owner Felix Charney, a developer who grew up in Westport and previously served on the town’s Planning and Zoning Commission. “It is proven that one of the remedies to break the cycle of poverty is to provide stable housing and access to education. We fundamentally believe that this type of housing is needed, and we are in a position to supply it.”

Town leaders, however, disagree. They view the lawsuit as unnecessary and a threat to the affordable housing exemption they received from the state. They have also accused Hollister of acting outside his role in the case to pave the way for additional affordable housing clients. Shipman & Goodwin and the developer, however, backed the decision to sue the state Housing Department.

“I think we have reached a boiling point, to say the least,” said Melissa Kane, a Democrat selectperson. “It was the last straw for me.” 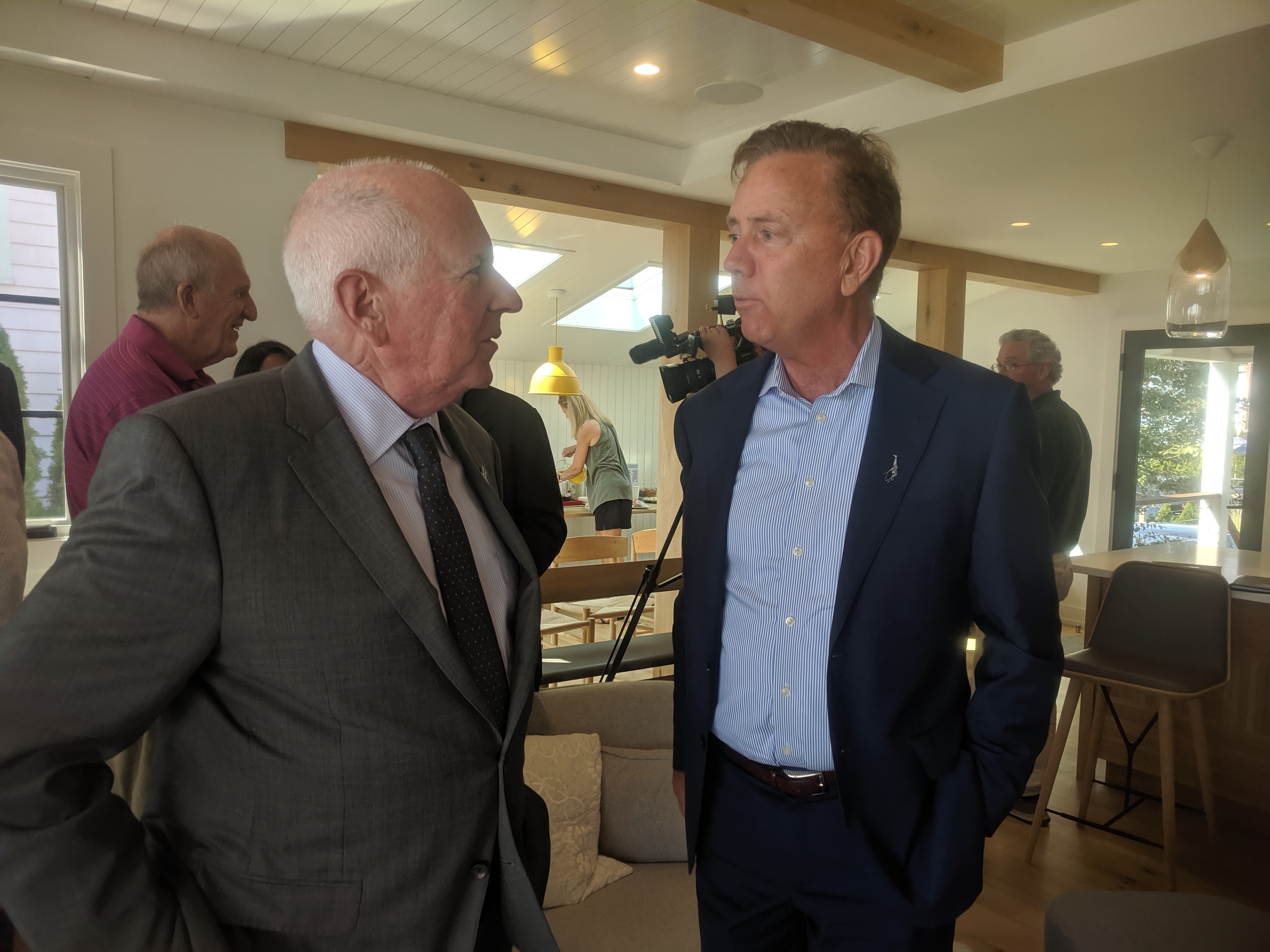 Gov. Ned Lamont, a Democrat, has taken a mostly hands-off approach to the state’s affordable housing crisis, saying in the past that he believes local leaders should decide how much to allow in their communities. And on Monday, during a visit to Westport, he declined to weigh in on the town dispute.

“Before I jump into that, let me just look into that a little bit,” Lamont told the Connecticut Mirror, as he celebrated the installation of environmentally friendly technology in a beachfront home that rents for $5,600 a week.

Afterward, Lamont’s spokesman said in a statement: “In individual cases like Westport, the Governor would like to see a balance between the needs of the community and access to affordable units. The state has made strides to make sure more families can occupy these buildings, but individual communities have to show a willingness as well.”

Meanwhile, the Westport Board of Education plans to discuss the matter during a meeting in October.

Board chairman Mark Mathias said he’s hopeful the relationship with Shipman & Goodwin can be saved. “I am an eternal optimist,” said Mathias, who has praised the firm’s education work.

Either way, though, “we will be fine,” he said.

Even though the decision rests with the Board of Education, some housing advocates say that town leaders hold a significant cudgel in the debate because they control the school district’s purse strings.

“It’s hard to see how the Board of Education in this climate sees this as a recommendation that they are free to ignore,” Haberlandt said.

Rebecca Adams, senior staff attorney for the Connecticut Association of Boards of Education, said forcing firms to pick between education and land-use clients could ultimately end up hurting all parties, including students. “It’s going to start to limit people’s choices all around,” she said. “The best resolution is for everybody to hire the best attorneys they need.”

Help us investigate: Are you concerned about affordable housing in your community in Connecticut? ProPublica and the CT Mirror are spending the year investigating. Here’s how to get in touch.

Jacqueline Rabe Thomas is a staff reporter for the CT Mirror covering education and housing. Email her at jrabe@ctmirror.org and follow her on Twitter @jacquelinerabe.

ProPublica is a nonprofit newsroom that investigates abuses of power. Sign up for ProPublica’s Big Story newsletter to receive stories like this one in your inbox as soon as they are published.