State says pols missed deadline to have their day in court 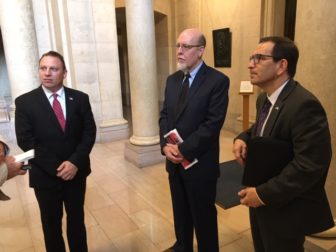 From left, Rob Sampson, Joe Markley and one of their lawyers, Rep. Doug Dubitsky.

Sen. Rob C. Sampson, R-Wolcott, and his predecessor, Joe Markley, were itching for a legal debate over political speech and campaign finance law. All they got Tuesday before the Connecticut Supreme Court were arguments over missed deadlines.

They say the State Elections Enforcement Commission violated their First Amendment rights by imposing fines of $5,000 on Sampson and $2,000 on Markley over campaign mailers promoting them in 2014 as reliable defenders against the policies of Gov. Dannel P. Malloy, a Democrat.

At issue was the question of whether the mailers were just a benefit to Sampson and Markley, who disagreed with Malloy on everything from taxation to criminal justice? Or did they also benefit Tom Foley, the Republican nominee for governor in 2014?

“The state cannot limit a candidate’s advocacy, especially highly effective advocacy, merely because a communication might have an effect on another candidate’s election,” their lawyers argued in a brief to the court. “The First Amendment guarantees a candidate’s right ‘to speak without legislative limit on behalf of his own candidacy.’ ”

But the commission viewed the attacks on Malloy by Sampson and Markley as at least partially benefitting Foley, making the mailers an improper contribution to Foley.

Sampson, then a state representative, and Markley, then a state senator, violated the conditions attached to the public financing they accepted as participants in the voluntary Citizens’ Election Program, the commission said. SEEC says they are barred from mentioning candidates other than their direct opponents in a negative light.

The agency also noted that state law bars one candidate’s committee from making expenditures to benefit another without a pro rata sharing of expenses reported by both campaigns.

“First Amendment issues are always a paramount concern to us as regulators,” Michael J. Brandi, the executive director and general counsel of SEEC, said Tuesday. “Our job is to regulate money in elections, to administer Connecticut’s clean elections program and also to protect the public fisc. You can’t just spend a clean elections grant on whatever you want. One simple rule is that you can’t spend your campaign’s dollars to benefit another candidate. That’s always been the law.”

The intent is to bar political money laundering.

“I think money laundering is a bad thing, and I think you can have laws against it,” said Allen Dickerson, the executive director of the Institute for Free Speech, which is representing Markley and Sampson. “But the problem is that the means the state has chosen are a content-based restriction of speech. That is the original sin of First Amendment analysis. And that’s not a close question.”

That was the argument that Dickerson made to a reporter in the foyer outside the Supreme Court.

Inside, the issue was narrow, even prosaic: Did a Superior Court judge err in August when he ruled that Sampson and Markley had missed the deadlines for appealing the commission’s ruling in court?

Assistant Attorney General Michael Skold did not address the free-speech issue in his brief to the court or during his arguments. He said there was no need.

“Contrary to Plaintiffs’ assertions in their brief, this appeal is not about whether the State Elections Enforcement Commission violated Plaintiffs’ First Amendment rights,” Skold wrote. “Rather, the trial court dismissed Plaintiffs’ administrative appeal for lack of jurisdiction because Plaintiffs filed it outside the time permitted by General Statutes.”

The justices agreed that the only issue presently before them was whether the trial judge had correctly interpreted the calendar, a task that turned out to be relatively complicated, involving 25-day and 45-day windows.

The commission’s final decision was issued on Feb. 14, 2018. Sampson and Markley petitioned the commission to reconsider on the same day.

When the commission did not act on the petition within 25 days, it was automatically considered denied under state law on March 11, 2018, state lawyers say. But the commission then voted on March 23, 2018 to formally deny reconsideration.

Sampson and Markley had 45 days from the denial to sue in Superior Court to overturn the commission’s action. But when did the 45-day countdown begin — on March 11 or 23?

“This is not a situation where we sat on our rights and time expired,” Dickerson said.

Skold told the court in his brief that SEEC had no authority to rule on the petition for reconsideration on March 23 “and its mistaken decision to do so was legally void and carried no force or effect.”