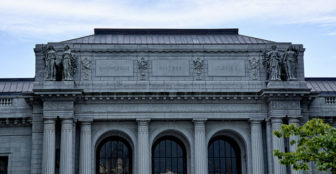 Robert I. Berdon, a liberal Republican who was the first of Gov. Lowell P. Weicker Jr.’s four appointments to the Connecticut Supreme Court, where the justice was known for keen legal scholarship, a soft-spoken manner and acerbic dissents, died Thursday. He was 89.

His family announced his death, according to the Judicial Branch.

Berdon was passed over for the Supreme Court by Weicker’s predecessor, William A. O’Neil, in the late 1980s, even though Berdon had seniority on the trial bench, an attribute that once carried weight in judicial promotions.

But Berdon, a former state treasurer appointed to the trial bench by Gov. Thomas J. Meskill in 1973, was thought to be too much of an activist for O’Neill, a socially conservative Democrat and observant Catholic. In 1981, Berdon ruled in a case that Connecticut had to pay for abortions for women who could not afford them.

“He’s one of the top scholars on the bench, who happens to be a liberal. That disqualified him in the past,” Wesley W. Horton, a top appellate lawyer, told The Hartford Courant after Weicker nominated Berdon.

Berdon was the author of more than 400 dissenting opinions during his eight years as a justice of the seven-member court.

“It’s important that if you disagree with the majority, you don’t merely go along to tag along,” he told the New York Times in 1993. “You have an obligation to put in your views and words so the the public can know what the other side is. It’s a constitutional obligation.”

It was an obligation he met with gusto.

In a case challenging how General Assembly districts were drawn, Berdon opened his dissent by saying that “the majority trivializes the State Constititution” with simplistic reasoning and an obvious “failure to understand the case that is before us today.”

Berdon shrugged off complaints about his style. “A couple members of the majority haven’t liked my choice of words,” Berdon told the Times. “But I’m going to say exactly what I think and what I feel should be said.”

And he did, over and over again

He left the high court in 1999 after reaching the mandatory retirement age of 70. He remained active as a state trial referee until 2014.

Berdon also wrote significant majority decisions, as Chief Justice Ellen Peters said in remarks noting his 20th anniversary as a jurist and his second on the Supreme Court in 1993. His output of 31 majority opinions in less than two years was prolific, she said.

One of his opinions set out a six-pronged test to guide interpretation of the newly revised Connecticut Constitution. He also helped set standards involving the invoking the right against self-incrimination and sanctions for the non-disclosure of evidence.

But Peters could not let the moment pass without mentioning his dissenting opinions, then double the number of his opinions on behalf of the majority..

“It is, however, not only as an author of majority opinions that Justice Berdon has made his mark,” Peters said. “Fiercely independent, passionately committed to the view that our courts have a wide ranging responsibility to protect the rights of defendants, especially criminal defendants, Justice Berdon has written an extraordinary number of vigorous dissents and concurrences, sixty-three by the most recent official count.

“These opinions stand as a testament to his intellectual and social conscience and reflect his belief, so well expressed at his swearing in, that ‘the poor must have adequate legal representation to assure reasonable access to the judicial branch of government in order to protect and preserve their rights.’ ”

Gov. Ned Lamont praised him Friday as a man who devoted himself to public service, beginning with his time in the U.S. Army during the Korean War and continuing in politics and the law.

“Through the course of his career, he authored hundreds of opinions that have had a profound impact on the laws of our state,” Lamont said.

“Strong-minded and scholarly, he was also deeply generous and gracious to all who came before him,” Blumenthal said. “I am proud and honored to have been in his courtroom and known him.”

Berdon is survived by his son Peter, daughter-in-law Nancy and grandchildren, Sarah, Joshua and Sophia, all of Branford.  He was predeceased by his wife for 28 years, Nancy Tarr Berdon. Funeral services will be held at Congregation Mishkan Israel in Hamden on Monday at 10 a.m.