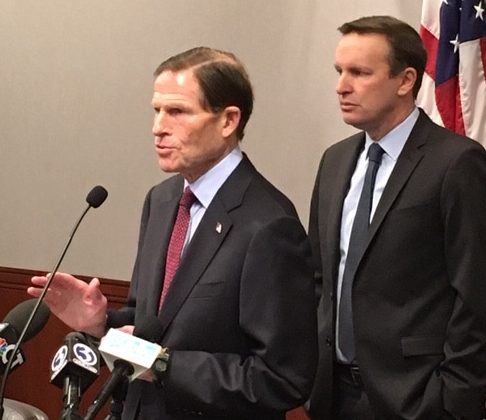 Washington — The holidays came and went, but the impeachment standoff between the U.S. House and U.S. Senate continues as Connecticut’s senators join fellow Democrats insisting there be witnesses at President Donald Trump’s trial.

On Friday, Senate Majority Leader Mitch McConnell said in a Senate floor speech that House Speaker Nancy Pelosi’s efforts to pressure him by holding back two articles of impeachment approved by the House last month is a “fantasy.”

According to the U.S. Constitution, the Senate must begin an impeachment trial once it receives articles of impeachment from the House.

But Pelosi said she is holding back the articles until she’s convinced McConnell will hold a fair trial, including witnesses and other evidence she says Trump has withheld.

“We need witnesses and documents that we have requested,” said Sen. Richard Blumenthal in a joint press conference with Sen. Chris Murphy in Hartford on Friday.

“I do not see how we can have a fair trial without an attempt to determine the truth,” Murphy said.

He also said “If Senator McConnell commits to a process to bring a handful of witnesses before the Senate, we could be done with the trial in a matter of weeks, not months.”

Senate Minority Leader Chuck Schumer, D-N.Y., said there has been no progress on Democratic demands that any trial include documents and witnesses that Trump blocked from appearing during the House inquiry.

McConnell “hasn’t given one good reason why there shouldn’t be relevant witnesses or relevant documents,” Schumer said minutes after the GOP leader spoke. “Instead of trying to find the truth, he is still using the same feeble talking points.”

The House voted to impeach Trump for abusing his power by holding back military aid to Ukraine, while asking Kiev to investigate former Vice President Joe Biden. The President is also accused of obstructing the congressional probe into the Ukraine scandal.

Democratic arguments for the impeachment of Trump were bolstered recently by documents released under court order to the Center of Public Security and viewed in unredacted form by Just Security, a national security website affiliated with the New York University School of Law.

Just Security says the documents reveal that on Aug. 30, after meeting with Trump, Michael Duffey, associate director of national security programs at the Office of Management and Budget, told Elaine McCusker, the acting Pentagon comptroller, in an email that there was “clear direction from (Trump) to hold” nearly $400 million in U.S. military aid to Ukraine.

Blumenthal said the documents “showed the Pentagon actively criticizing” the hold on the money “at a time when Ukraine desperately needed it.”

Blumenthal said he believes some of his GOP colleagues may “crack” and join Democrats in demanding witnesses and documents at the Senate impeachment trial, in which all senators will act as jurors.

But Murphy is more skeptical of GOP help.

He said Democrats will have to press for votes on motions to procure witnesses and documents.

Two-thirds of the GOP-controlled Senate would have to vote to remove Trump from office —  unlikely since there are 53 Republicans and 47 Democrats and independents who vote with Democrats in that chamber.

But only simple a majority is needed to pass rules and motions that would shape the Senate trial. That translates into four Republican votes. Sens. Sens. Mitt Romney, R-Utah, Lisa Murkowski, R-Alaska and Susan Collins, R-Maine, each signaled some willingness to break from the GOP.

Whiles the scheduling of the trial is not known, there’s little doubt how Connecticut’s senators will vote on Trump’s fate.

“We have a pretty clear picture already on the crimes and abuses the president committed,” Murphy said. “But I want to see the full record because I want to doublecheck that the conclusion I’ve come to is the right one.”

Blumenthal said he’s seen and heard enough to form an opinion. “I think there is overwhelming evidence for removal and conviction.”

Meanwhile, McConnell on Friday said his chamber would continue with “ordinary business” while it waits for the articles of impeachment.