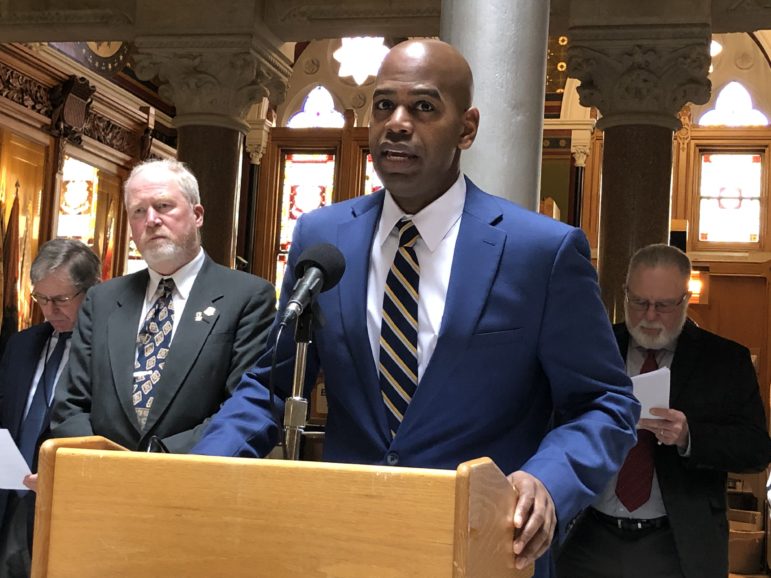 The Progressive Caucus, which includes a little less than half of the 91-member House Democratic majority, unveiled an agenda Tuesday that also includes new environmental initiatives and automatic voter registration.

“We are laser-focused to roll out these priorities,” said Rep. Anne Hughes, D-Easton, co-chairwoman of the caucus, who added the relative brevity of the 2020 General Assembly session — just over 13 weeks ending on May 6 — won’t be an  excuse not to act.

As it did last year, the caucus again will focus on reforming a state and municipal tax system with highly regressive levies like property and sales taxes that shift much of the burden onto the poor and middle-class.

The most pressing tax issue in Connecticut is not the overall tax burden,” said Rep. Michael Winker, D-Vernon, “but rather the regressive distribution of that burden, which exacerbates … income inequality.”

The plan would not alter overall revenues for the state. But it would provide relief for an estimated 90% of households.

Connecticut Voices proposed expanding one state income tax credit and creating a second one. Together this would pump a projected $600 million annually into Connecticut’s middle class and working poor households.

To pay for this proposal, Connecticut Voices recommended higher income tax rates on households earning more than $1 million annually — including a surcharge on investment income. It also recommended freezing the state’s tax on multi-million-dollar estates, which is scheduled to shrink over the next few years.

Republican minorities in both the House and Senate, as well as moderate Democrats — including Gov. Ned Lamont — have opposed this approach, arguing higher taxes on the wealthy would prompt them to leave Connecticut.

It also would be structurally difficult — but not impossible — to realign Connecticut’s tax structure because of a new “volatility adjustment” statute enacted two years ago.

This measure, which Connecticut also has pledged in its contracts with state bond holders to retain for the next 10 years, requires the state to save a significant portion of its income tax receipts from capital gains and other investment earnings.

In other words, to redistribute these dollars back to low- and middle-income households as tax relief would require repealing or modifying this volatility statute.

Connecticut could try to refinance its bonds — an expensive proposition — to get the obstructing bond covenant language out of the way, and then repeal the savings requirement. It also could modify the program without repealing it. But the bond language stipulates this only could be done with a 60% vote in the House and Senate — a daunting prospect.

And any change also would require the governor’s cooperation.

Rep. Joshua Hall, D-Hartford, the progressive caucus’ other co-chair, acknowledged this is difficult, but said members are pressing the issue constantly with their colleagues.

“We are constantly having those conversations,” he said.

Another key part of the group’s agenda involves legalizing recreational cannabis use.

Rep. Michael D’Agostino, D-Hamden, said the proposal, still under development, would include expungement of criminal records of many people previously convicted on marijuana-related charges, as well as economic opportunities in Connecticut’s poor urban areas for those seeking licenses to process, distribute or sell cannabis products.

The caucus agenda also calls an end to solitary confinement in Connecticut’s prisons.

“I don’t think there’s anything more to say about that except we all recognize in this caucus — and I think beyond this caucus — that the inhumane practice of solitary confinement has to end,” D’Agostino said. “We will have a bill on that. We will have a public hearing on that.”

The caucus also is pressing for reforms of the prison payphone system, and D’Agostino said state government must end the decades-old practice of profiting from inmates’ families by charging excessive rates for them to call their incarcerated loved ones.

Another key component of the caucus’ agenda focuses on Connecticut’s labor laws.

The “fair work week” initiative includes a requirement that workers be given at least an 11-hour break between full shifts.

Many low-paid workers are pressed into working either a double-shift — 16 hours straight — or may have to work late into the night, go home for a few hours sleep, and then have to cover an opening shift early the following morning.

He said the plan also would require “predictive scheduling.”

Details still are being developed, but employers must provide 14 days of notice before ordering a significant shift in a worker’s schedule. Many low-paid workers struggle to afford child care, and cannot make last-minute arrangements easily when their schedules shift dramatically.

Connecticut’s prison population also has been used by state politicians for district gerrymandering, another practice that needs to stop, D’Agostino said.

When taking population counts, Connecticut has listed inmates as residents of the town where the prison that holds them is located — rather than of the community where they had lived, and likely will return when their sentence is over.

D’Agostino said this practice artificially inflates the population of a few communities that host prisons while lowering those of many other communities.

But the linchpin of the progressive caucus’ voting rights plan involves support for automatic voter registration. Under this system, individuals eligible to vote are considered automatically registered when they interact with certain government agencies.

For example, a customer renewing a license at the Department of Motor Vehicles also could be added to the registered voter list at the same time.

Other elements of the caucus agenda include: