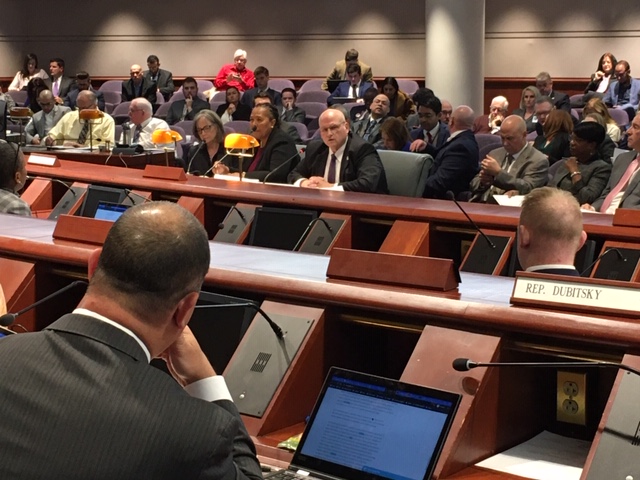 With closely choreographed public-hearing testimony by agency heads and other officials, the administration of Gov. Ned Lamont delivered a broad overview Monday of the complexities involved in trying to legalize and regulate the sale of recreational marijuana in Connecticut.

Prospects of passage remain uncertain in the three-month, election-year session of the General Assembly, but for the first time an administration has given its full-throated support for legalization, proposing a 108-page blueprint for establishing a regulated market for pot by July 1, 2022.

Five commissioners, including the former Hartford police chief who oversees the Department of Emergency Services and Public Protection, took turns explaining and defending the administration’s multi-step pitch for legalization to the legislature’s Judiciary Committee.

Lamont did not appear, but he told lawmakers in written testimony that marijuana already was widely available in Connecticut through illegal sources and legal sales in neighboring Massachusetts. Legalization is being debated in Rhode Island and New York.

“We can no longer stick our heads in the sand,” Lamont wrote. “Cannabis is currently, and will be increasingly, available to residents of Connecticut.”

Connecticut legalized the sale of medical marijuana in 2012 and it has decriminalized the possession of small amounts of pot, but no legalization bill has come to a floor vote in either chamber of the General Assembly.

They were opposed by the Connecticut Police Chiefs Association, employer groups and the AAA over the difficulties in detecting impairment from the use of marijuana by motorists and employees.

Supporters and opponents of the bill agree there is no correlation between the blood level of THC, the psychoactive compound in pot that produces a high, in the level of impairment. THC can remain in the system long after use, and users get high before there are detectable levels in their blood.

“There’s no accurate way to judge if they are impaired when they show up to work,” said David Krechevsky of the Waterbury Regional Chamber of Commerce.

James Rovella, the public safety commissioner, and Sibongile Magubane, the commissioner of motor vehicles, testified that the state needs to pursue better detection with or without legalization.

With no available blood tests for marijuana, the National Highway Traffic Safety Administration has worked with law enforcement to develop ARIDE, the advanced roadside impaired driving enforcement program, as a supplement to the standard field sobriety tests. It requires 16 hours of training.

“Connecticut already has a drugged driving problem,” said Amy Parmenter, government affairs manager for the AAA. “In an analysis of national crash data, Connecticut had a significantly higher percentage of fatally-injured drivers who tested positive for drugs other than alcohol, as compared to the national average — with cannabis being the most prevalent drug.”

While opposing legalization, Parmenter said the AAA supports a section that would have Connecticut adopt ARIDE standards for detecting impairment and encourage training in the more rigorous program that certifies police officers as “drug recognition experts.”

It can cost as much as $10,000, and Wallingford Police Chief William Wright said only 62 police officers in Connecticut have the training. Wright testified on behalf of the police chiefs association.

Jonathan Harris, the governor’s senior adviser, told lawmakers that “a big focus” of the governor’s bill is traffic safety. While legalization poses risks, Harris said the administration believes that overall it improves public health and safety by imposing standards on an unregulated market and improving traffic enforcement.

The administration says that nothing in the legislation would prohibit employers from barring the use of marijuana in the workplace or judging workers on their performance.

Harris told lawmakers that the issue was complex, and the 108-page bill reflects concerns and questions raised by legislators and others last year.

“What is the time line here, if the legislature takes action this year?” asked Rep. Steven Stafstrom, D-Bridgeport, the co-chair of the Judiciary Committee.

“We view this to be a continuing process,” Harris said.

The bill would allow Connecticut residents to legally possess up to an ounce and a half of marijuana purchased elsewhere, beginning this summer. But developing the regulated market and addressing related issues would require another two years, he said.

The related issues include developing recommendations by a Commission on Equity about ensuring that the new market would be open to small business owners in cities and not dominated by major companies.

The administration also is proposing a mechanism for automatically expunging the criminal records of residents with marijuana possession convictions.

Harris said lawmakers would have opportunities in subsequent legislative sessions to shape the new system.

Harris said the governor does not view the sale of marijuana as a fiscal measure, though it would be heavily taxed, similar to the system employed in Massachusetts, with a state sales tax, a municipal sales tax and a state excise tax.

The 3% municipal sales tax would go to the community where the marijuana was sold.