Widespread community transmission 'only a matter of time' 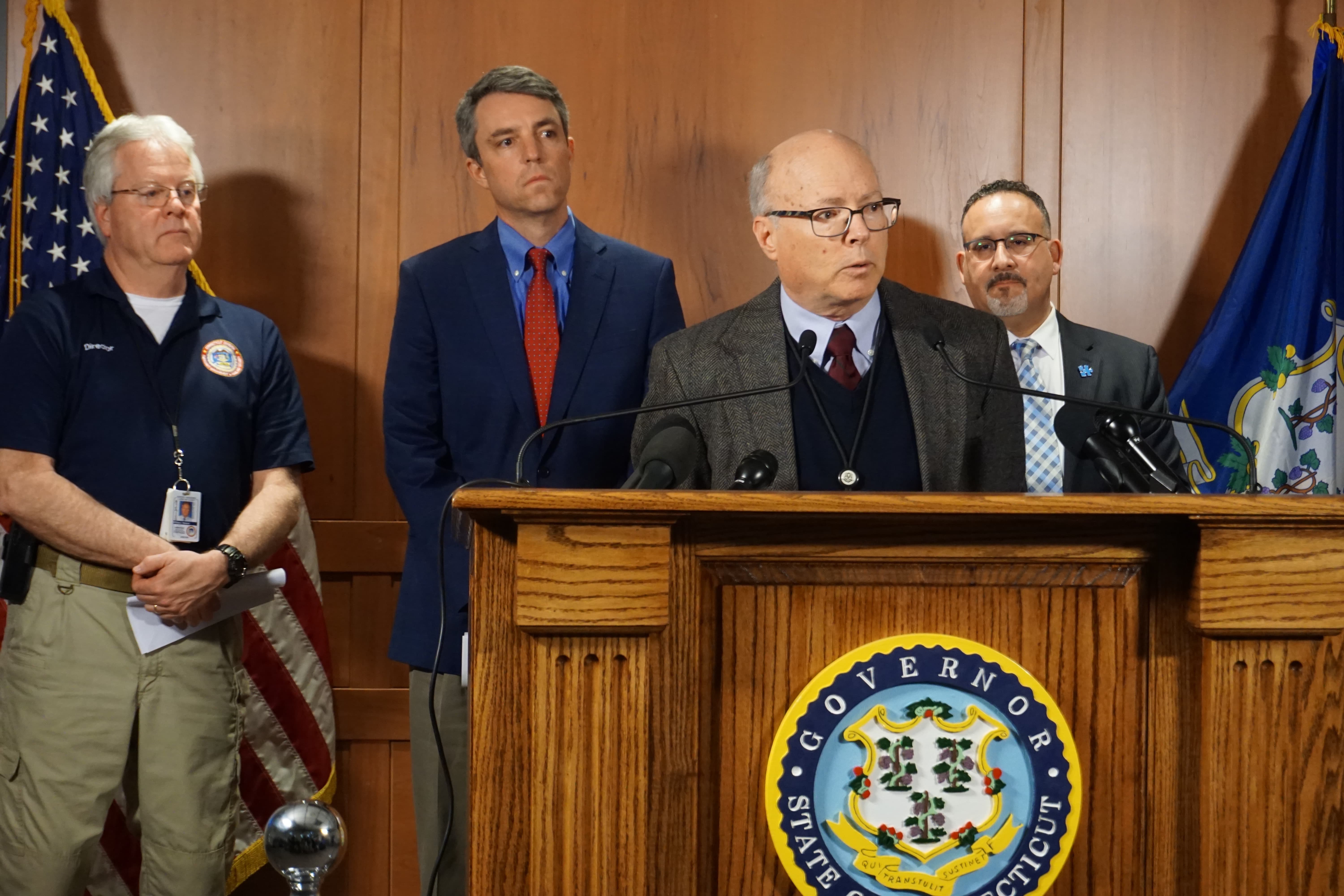 An elderly New Canaan man was confirmed Wednesday as the third coronavirus patient in Connecticut and the first assumed to have contracted the illness in the state, the harbinger of what the state epidemiologist called the virus’ inevitable statewide spread.

“It is only a matter of time before we have widespread community transmission throughout the state of Connecticut,” said Dr. Matthew Cartter, the state epidemiologist, noting Connecticut is now surrounded by outbreaks in New York, Rhode Island and Massachusetts.

Cartter said anyone in southwestern Connecticut who has a cough and fever should now assume they have COVID-19, the novel coronavirus blamed for the outbreak of respiratory illness in nearby Westchester County, N.Y.

“You don’t need a test to tell you that’s what you have,” Cartter said at a briefing at the Emergency Operations Center at the State Armory in Hartford. “You should assume that’s the illness that you have.”

A man in Wilton and a woman in Bethlehem sickened by the coronavirus believed they became ill traveling out of state to California and Nevada, respectively. The New Canaan patient lives alone and has not be traveling. He is hospitalized in Norwalk Hospital.

We have not seen a pandemic like this in 100 years, and none of us who are in this room today have been through anything quite like this.

Cartter said the vast majority of those who contract COVID-19 will recover by resting at home, but he expects fatalities in Connecticut from a fast-moving virus that the World Health Organization proclaimed Wednesday to be a global pandemic.

“We have not seen a pandemic like this in 100 years, and none of us who are in this room today have been through anything quite like this,” Cartter said.

Gov. Ned Lamont declared a public health emergency Tuesday, directing local health officials to dissuade schools, municipalities and employers from holding events with an attendance of more than 100, an effort to slow the spread and keep hospitals from being overwhelmed.

“These are challenging times, but like other pandemics there are things we can do to slow it down and make sure our hospitals stay open,” Cartter said.

While most who contract the virus will recover without medical intervention, the elderly and persons with compromised health are vulnerable to pneumonia and other life-threatening respiratory illnesses.

“We don’t know what the mortality rate will be for this disease in the United States. We know some of our citizens and residents of Connecticut will not survive this. But our goal is to make the number as small as possible,” Cartter said.

Connecticut’s testing capacity is improving, but Cartter said most who get the disease will not need to be tested, with the greatest need for hospitalized patients. Public-health officials were tracing the contacts of the New Canaan patient, they would stop contact investigations in coming weeks as the virus becomes ubiquitous.

Schools in Westport, Stratford and Region 14 closed due to contact with a virus patient. Officials in New Canaan were exploring closing schools temporarily and offering on-line instruction, legislators said.

UConn announced Wednesday night that beginning March 23 it will move all classes online at its Storrs campus, regional campuses, and its law school in Hartford. The online classes will extend through at least April 5, the university said. Yale University and Connecticut College have also moved classes online.

The four regional state universities and the 12 community colleges will move all classes to online formats for at least two weeks after students return from spring break on March 23. All classes through Friday are expected to continue, except at Southern Connecticut State University and Norwalk Community College. Both canceled classes for the remainder of the week. All residence halls will be closed until 3 p.m. on April 5.

“We are taking all necessary precautions to mitigate the threat of the COVID-19 coronavirus on our students, faculty, and staff,” said Mark Ojakian, president of the system. “In concert with the CSCU campus leaders, we made the decision to move classes online out of an abundance of caution. We will continue to closely monitor the spread of the virus and take all necessary precautions to protect our communities.”

The General Assembly has canceled all public hearings that had been scheduled for next week and will allow voting by telephone on committee actions. The State Capitol and Legislative Office Building will be closed Thursday and Friday for cleaning.

Josh Geballe, the state’s chief operating officer, said Wednesday that Centers for Disease Control and Prevention notified Connecticut the state is getting $7 million in reimbursement for coronavirus-related expenses.

Insurance Commissioner Andrew N. Mais issued a notice on Wednesday instructing travel insurers to accommodate travel cancellation requests, taking into account the seriousness of the circumstances and the civil preparedness and public health emergencies declared by the governor.