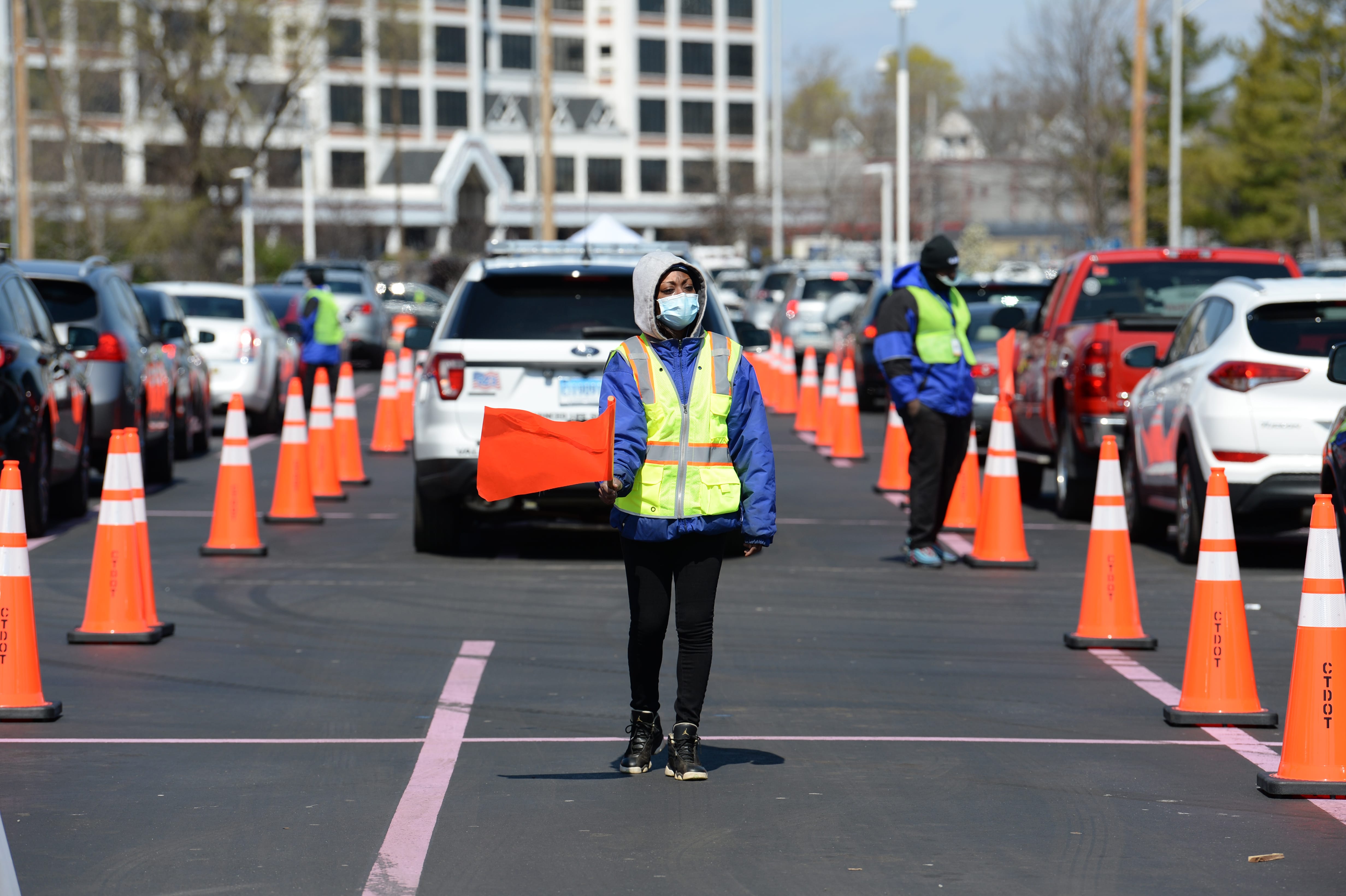 A worker flags a car into a line in the parking lot of Jordan’s Furniture to wait for test results at the state’s first rapid COVID-19 testing center in New Haven on April 17, 2020.

As COVID-19 infections and deaths at Connecticut nursing homes and across the nation continue to rise, workers at facilities here are growing increasingly fearful that they may be endangering their families by bringing the disease home with them.

Union officials said Saturday that, in addition to the two nursing home staffers now known to have died of coronavirus, they are aware of at least two family members of nursing home employees who have also died of COVID-19.

“It means an extra level of sadness, because those workers feel they brought the virus home,” Pedro Zayas, a spokesman for SIEU 1199NE, a union representing nearly 7,000 nursing home workers, said Saturday.

“It’s highly likely they contracted the disease from the nursing home workers,” Zayas said of those two family members, one the husband of a nursing home employee and the other the mother of a worker. Zayas said those kinds of horrible situations adds enormous feelings of guilt to a worker’s sense of loss.

While the pandemic’s impact on nursing homes continues to grow, Gov. Ned Lamont Saturday said the latest numbers on COVID-19 patients in Connecticut hospitals are “providing us with some hope.”

“For the first time since the start of this pandemic, today we saw the number of COVID-19 positive patients in our hospitals decline,” Lamont said in a late afternoon statement. The number of those hospitalized for the virus dropped by eight to a total of 1,938, state officials reported. “But one day of data alone does not mean we are out of the woods and can return to life as normal,” Lamont warned.

Connecticut’s death toll from the pandemic rose by 50, bringing the number of people who have died from virus-related causes to 1,086 as of Saturday. Another 2,751 people were tested for the coronavirus in the last 24 hours, state officials reported Saturday, bringing that total tests administered to 58,213. An additional 741 cases were confirmed positive.

SIEU 1199 officials estimate that about 700 of their members working at nursing homes across the state have had coronavirus-like symptoms or been tested positive for the virus. The union has nearly 7,000 members employed at nursing homes in this state, representing about 30% of the staffs at Connecticut’s 213 long-term care facilities in this state.

Rob Baril, president of the union, said the actual number of nursing home workers who have gotten COVID-19 here must be far higher. “I would certainly suspect it would be in the thousands,” Baril said.

One example of the rate of employee infections at nursing homes came during New Haven Public Health Director Maritza Bond’s Saturday report on that city’s long-term care facilities. She said that at the Grimes Center, a facility with 102 residents, 18 staff members have now tested positive, as have 58 residents.

Officials in Gov. Ned Lamont’s administration insist they are doing everything possible to provide proper protection for front-line nursing home workers. But union leaders say they are growing increasingly frustrated that too many of those employees have had to use makeshift equipment and re-use disposable masks and gowns.

Gov. Ned Lamont’s administration “is working hard” to protect nursing home workers during this crisis, Baril said, but “more needs to be done.” He said that should include providing free health care for nursing home workers or their family members who come down with the coronavirus. Baril said most nursing home staff are low-wage employees who often have health insurance coverage that requires high out-of-pocket payments before the insurance kicks in.

And he lashed out at President Trump over the lack of a “coordinated federal response” to the pandemic, saying the Trump administration appears to feel that nursing home workers “simply do not matter.”

The state has now designated four facilities where nursing home patients who have tested positive for coronavirus can be moved. The hope is that moving those COVID-19 patients to separate facilities will help protect residents who remain from infection.

Two of the COVID-19 only nursing homes are in Sharon and Bridgeport. Currently closed nursing homes in Meriden and Torrington are now being cleaned and reopened to house coronavirus patients from other long-term care facilities.

Some coronavirus patients started being moved into the COVID-19 home in Sharon this past week and more will be moved to the Bridgeport facility starting Monday, according to the state’s plans.

Gov. Ned Lamont visited Connecticut’s first rapid COVID-19 testing station in New Haven Saturday. The station is being operated in partnership with CVS and officials say it will eventually be able to test up to 1,000 people a day with results available within 30 minutes.

A sign marks a parking area for waiting for test results at the state’s first rapid COVD-19 testing center in New Haven. The site which is run by CVS Health and the state of Connecticut.

The testing station is at 60 Sargent Drive, and only people who have pre-registered online will be able to drive up to the station for the test. There are no walk-up visits allowed. The rapid test being used, developed by Abbott Labs, can report results in as little as five minutes.

New Haven officials said about 630 people were tested at the station’s launch on Friday, nearly a quarter of the tests conducted in the state that day.

Following new laws in Bridgeport and New Haven, masks will now be required throughout Connecticut in retail stores, many workplaces, in taxis and ride-sharing vehicles and on all mass transit, according to a new executive order issued by Lamont on Friday.

Lamont’s order will take effect Monday and states that people must cover their mouth and nose when out in public. The order won’t apply to people whose health might be compromised by wearing a mask, to babies or kids in day care facilities.

Metro-North officials have already ordered that masks be worn by passengers on all of the rail service’s lines.