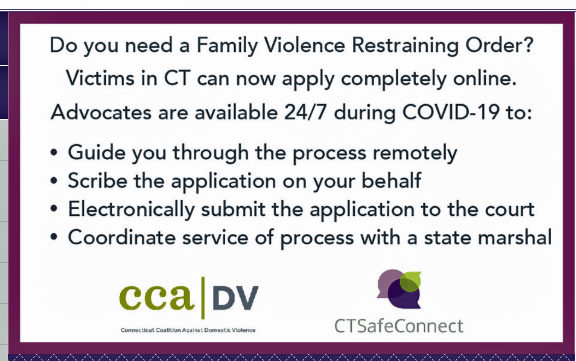 A notice on the coalition’s website telling victims how to file a complaint online.

The coronavirus pandemic in Connecticut has created a surge in calls to the state’s domestic violence hotline, leaving activists scrambling to find emergency housing for victims and concerned that the crisis may be hindering others from seeking state protection.

Early April saw a 52% increase in domestic violence hotline calls compared to a similar period in early March, according to Karen Jarmoc, president and CEO of the Connecticut Coalition Against Domestic Violence.

Connecticut’s 227 licensed emergency beds for people fleeing domestic violence are now almost completely filled and 29 other victims are now being housed in hotels for their protection, Jarmoc said Thursday.

The pandemic has closed many state courts, and domestic violence activists warn that those closings may be making it more difficult for victims to request restraining orders. There are also fears that victims are now under added financial stress and are being forced to stay home with their abusers because so many people have lost their jobs during this crisis.

“This creates enormous safety implications for victims,” Jarmoc said.  The coalition she heads represents the state’s 18 domestic violence service agencies. “We continue to see the ongoing impact of COVID-19 on victims as they cope with issues such as unemployment and decreased access to basic necessities,” Jarmoc said.

But state judicial officials insist they are continuing to rapidly process pleas for domestic violence restraining orders. The latest law enforcement reports show that calls for help in family violence cases declined slightly during the first two weeks of April compared to April 2019.

According to the information released Thursday, municipal and state police recorded 495 family violence calls for help between April 1 and April 15 of this year, compared to 519 calls for the same period in 2019.

Jarmoc said the latest police reports do not reflect arrests for domestic violence and may not be a true indicator of what’s happening around the state. “That’s concerning,” Jarmoc said.

Jarmoc said an additional concern is that judicial officials may be reluctant to hold accused abusers in jail because of the increased risk of COVID-19 infections in state facilities. She also said there are indications some accused abusers’ cases are being postponed until July or August because of the pandemic.

But a spokeswoman for the state Judicial Department denied that judges have altered their handling of domestic violence cases or are reluctant to hold some abusers in jail because of the coronavirus crisis.

“Judges are using the same standard of review that they used prior to the COVID-19 pandemic,” spokeswoman Melissa Farley said. “Judges determine the appropriate bond and some defendants remain held on bond.”

“In all cases involving domestic violence, protective orders are issued and judges may order non-financial conditions of release such as GPS monitoring with victim notification,” Farley said. “All efforts are made to keep victims safe.”

State Judicial Department records show that during the week of April 6, just 76 applications for domestic violence protective orders were filed in Connecticut.

Based on weekly averages for domestic violence protective orders issued last year, that’s a drop of more than 45 percent, according to Jarmoc. She said the fact that numerous state courts have closed as a result of the pandemic and that the remaining courts have limited hours of operation has almost certainly had an impact on the number of applications filed.

Just six of the 19 Connecticut state courthouses that would normally handle such applications now remain open. State officials have allowed domestic violence victims to make online applications for restraining orders, but Jarmoc said not all victims know how to do that or may not have access to computers and the internet while isolated at home. Activists are trying to help those victims with the online process, but Jarmoc said many victims may not have free access to the internet if they are now isolated at home with their abusers and unable to use computers at local libraries that are now closed because of the pandemic.

Activists around Connecticut have been scrambling to find enough beds to house women seeking to escape from domestic abuse in recent weeks. “We’re at 118% right now,” Jarmoc said.

The pandemic has also created added worries about putting different families together in emergency housing because of the fears of COVID-19 transmission. “We can put multiple families together,” Jarmoc said. The additional hotel rooms now being used to house victims are being paid for with a $15,000 contribution by a donor who wishes to remain anonymous, Jarmoc said.

Farley said that the Judicial Branch is handling only Priority 1 cases, because of the pandemic.  Cases involving domestic violence are deemed as priority 1 cases, she said.

In terms of temporary restraining orders, there has been no modification or alternation in the process,” Farley  said. “Every single application is being scheduled consistent with the statute within 14 or 7 days.”