As hunger grows in Connecticut, there’s a push in Washington to expand food stamps

Cars began lining up around 6 a.m, for a Foodshare expanded food giveaway that began at 8:30 a.m.

Washington – Hunger is growing in Connecticut, tied to the economic impact of the coronavirus. Feeding those most in need is a growing challenge.

As one part of that challenge, Democratic members of Congress, including members of Connecticut’s congressional delegation, are pushing to expand the availability and utility of food stamps in the next stimulus bill, but there is no guarantee they will succeed.

Meanwhile, about 26 percent of Connecticut residents recently polled by Quinnipiac University said they were “very” or “somewhat” concerned about having enough food to eat.

And a survey by the Brookings Institution found that nearly one out of every five mothers with kids 12 years old or younger said their children are not getting enough to eat — a rate three times as high as it was in in 2008 during the worst of the Great Recession.

Food banks in the state are experiencing a surge in people seeking help, many for the first time. Hundreds have been queuing up in their cars at Rentschler Field in East Hartford, where the nonprofit Foodshare is distributing 20 lb. bags of food,

“Our bills haven’t stopped, so this helps a lot when it comes to groceries and trying to make sure that the house is fed,” said one young man waiting in his car. “That way we can worry more on making sure that our whole household is safe.”

Foodshare President Jason Jakublowski said 75 percent of the people picking up bags of food at Rentschler Field had never visited a food bank before. Although Foodshare traditionally serves low income people living in Hartford and Tolland counties, he said residents from wealthier areas, including West Hartford and Farmington, are also showing up in need of help. 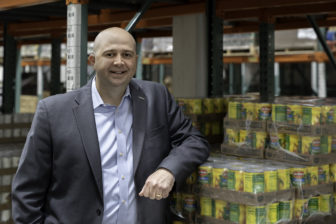 “Hunger does not care what zip code you have,” Jakublowski said.

He also said food banks are not a solution to the food insecurity crisis.

“Food stamps are the first line of defense,” Jakublowski said. “For every meal that a food bank can provide, food stamps can provide nine.”

Food stamps, or the Supplemental Assistance Nutrition Program, (SNAP) is a federal program run by the Connecticut Department of Social Services in the state.

The department said that net monthly SNAP enrollment had been gradually declining from a high of more than 400,000 to about 360,000 and “plateauing” at that level.

And that increase may not reflect all of the need. Some applications received in April were still pending, said DSS spokesman David Dearborn. Dearborn said DSS has 30 days to make a decision when outstanding verification is  needed, so those applicants would not be included the April 30 net enrollment count.

To qualify, a household must have an income of 130 percent of the federal poverty level, about $28,000 for a family of three.  Before the pandemic, the average SNAP household had a total income of just a little more than $10,000 and received a benefit of about $239 a month. 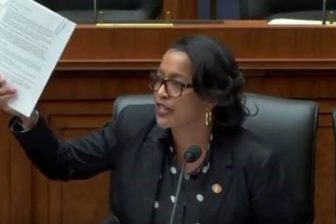 Rep. Jahana Hayes and other Connecticut lawmakers are trying to expand the food stamp program.

Rep. Jahana Hayes, D-5th District, is seeking support for a bill backed by anti-hunger advocates called the Food for Working Families Act that would discount the $600 a week in federal benefits received by the jobless in applications for food stamp benefits.

“This critical supplement was created to put more money in the pockets of Americans who need it most, not block their access to critical nutrition programs,” Hayes wrote to House colleagues in an effort to garner support for her legislation. “SNAP is the single strongest tool we have to inoculate Americans from food insecurity while also bolstering our economy. It is vital that we ensure workers whose employment has been impacted by the COVID-19 pandemic have access to SNAP.”

The federal stimulus bills passed by Congress to blunt the economic impact of the pandemic  boosted SNAP funding through two emergency benefit allocations, or extra payments, that were include in recipient’s electronic benefit transfer (EBT) accounts on April  9 and April 20.

Those bills also paused the Trump administration’s attempts to limit enrollment in the program through new work requirement rules. The administration had placed a three-month time limit on benefits for adults under 50 without children in their home unless they worked at least 20 hours a week. As of April 1, that restriction no longer applied.

The stimulus bills also boosted, by about $450 million, a U.S. Department of Agriculture program that provides commodities to the nation’s food banks. Jakublowski said Foodshare will receive about $1 million in extra commodities, but the food won’t be delivered until July.

Connecticut lawmakers say more is need to meet the sudden and unexpected need for nutritional help during the pandemic.

Rep. Rosa DeLauro, D-3rd District, wants the USD, the federal agency with authority over SNAP, to add Connecticut and other states to a pilot program that allows  grocers and other online retailers to deliver food to SNAP recipients instead of forcing them to shop in person.

And Sen. Chris Murphy, D-Conn., wants SNAP recipients to be able to use their EBT cards to purchase carryout food at restaurants.

Connecticut’s lawmakers have joined most of their Democratic colleagues in pushing to raise food stamp benefits by 15 percent for the duration of the economic crisis, arguing that a similar move during the Great Recession reduced hunger and helped the economy.

“I personally think it should be higher,” said Robin Lamott Sparks, director of End Hunger Connecticut!, who supports the proposed increase.

Her anti-hunger group helps people apply for food stamps. Lamott Sparks said she had one and a half staffers working full time on those applications before the pandemic began. Now she has three and a half employees doing that job and they are overwhelmed.

“At one point we had 800 calls to return,” Lamott Sparks said.

She also said before the pandemic —  from October through December 2019 —  End Hunger Connecticut! helped 185 people with SNAP applications. It helped 186 people with applications just during the month of April.

While Democrats will push to expand SNAP, there’s a GOP pushback.  Republicans have fought for years to shrink the program, saying that the earlier liberalization, especially during the Great Recession, led to a permanent growth in caseload and a backdoor expansion of the welfare state.

They said they were promised that when the recession’s unemployment ended, the numbers of people receiving food stamps would shrink and that did not happen.

The numbers did shrink, just not to pre-recession levels.