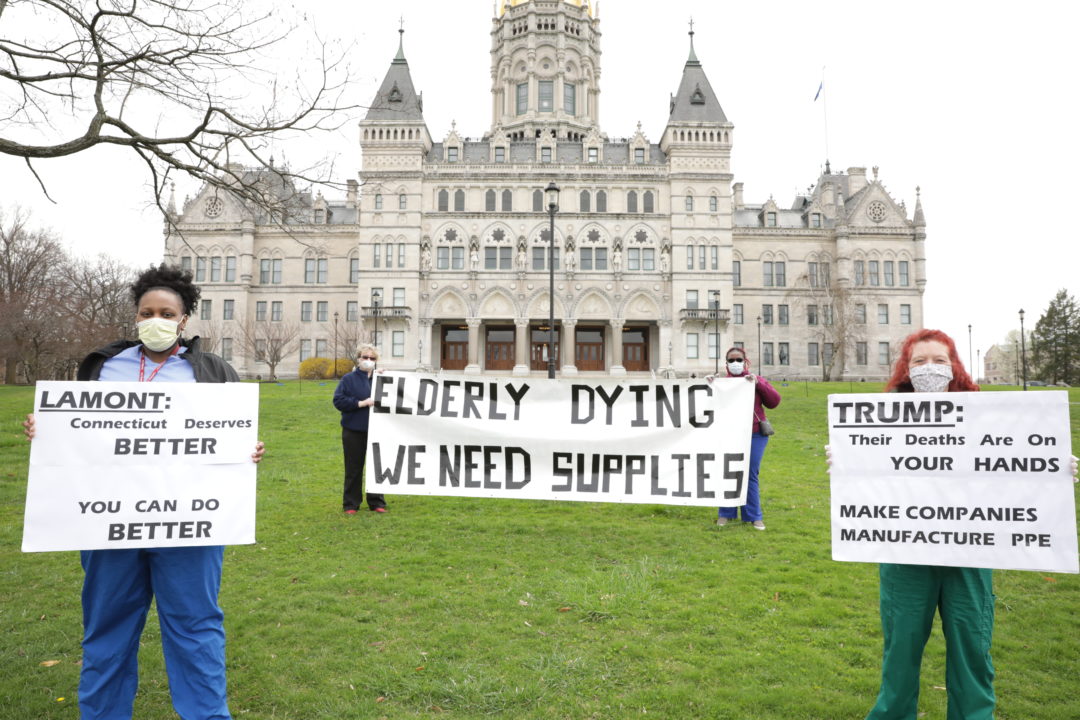 Nursing home workers visited the state Capitol to call for a better federal and state response to the COVID outbreak in nursing homes.

A lack of federal and state guidance, coupled with limited availability of protective gear, is inhibiting Connecticut’s nursing homes residents from getting to shower, with workers instead sponge-bathing many residents in their beds.

The issue came to the fore during a Connecticut Department of Public Health conference call last week with nursing home providers, where officials recommended that workers discard personal protective equipment, or PPE, after each shower or bath, as well as throughly clean the bathing facility.

“Assisting residents with COVID-19 showering can be high-risk, and staff should use full PPE, however the PPE will get all wet and will need to be discarded after each shower,” Dr. Vivian Leung, an epidemiologist who oversees infection surveillance, pathogen containment and outbreak response at the state’s Department of Public Health, told The Mirror.

Showers and baths enhance the “burn rate” of personal protective equipment, according to Matthew Barrett, president of the Connecticut Association of Health Care Facilities, the for-profit state association leader.

Despite a sizable recent PPE shipment to the state, it’s been perpetually in short supply throughout the pandemic. So in the interest of conserving their equipment, many nursing home providers have opted to clean some residents – often those who have a confirmed or suspected COVID-19-positive status – via sponge baths.

“On one hand, the state says that nursing homes have plenty of protection equipment. On the other hand, the state tells nursing homes that it’s totally acceptable to stop showering residents to save protection equipment,” said Rob Baril, president of SEIU 1199NE, which represents 7,000 nursing home workers. “There has been a huge failure of communication around the supply and use of protective equipment. It has proven to be deadly for Connecticut’s elderly, poor, and disabled communities.”

Baril said showers have been either scaled back or completely eliminated at many nursing homes because coveralls and other protective gear are not readily available to accommodate showering residents.

“It could be difficult to shower a resident because PPE could become moist, so great care would have to be taken,” said Tim Brown, spokesman Athena Health Care Systems, which owns 24 nursing homes in Connecticut. “We are encouraging staff to do a full bed bath for any COVID-19 positive confirmed patient or anyone on active precautions.”

For the remainder of nursing home residents, Brown said, “It’s looked at on a case-by-case basis. Where is shower located – do they have a private shower in their room or is it a shared area? Also, how much assistance is required, can the PPE remain dry, etc.”

He pointed out that many residents were already getting sponge baths pre-COVID-19 if they were not capable of having a shower or bath.

Ryder Health Management, the owner of Aaron Manor, Mystic Healthcare and several other nursing homes in the state, declined to address whether residents are being offered showers and baths.

“All Ryder facilities follow strict guidelines for patient care. We do not discuss the day-to-day practices of patient care out of concern for our patients’ privacy. Our staff is well-trained and make patient care and safety our priority,” said Andrea Obston, a spokesman for Ryder Health Management. 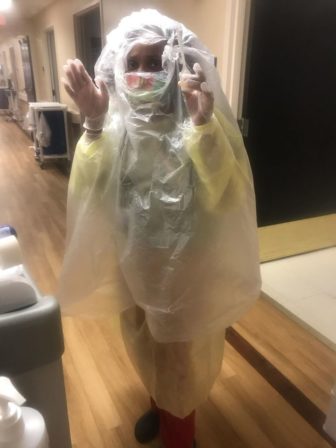 A nursing home worker fashions a protective gown out of garbage bags.

Barrett, of the Connecticut Association of Health Care Facilities, agreed that the pandemic has complicated showering residents.

Barrett suggested that showering could create a greater risk of virus transmission. “This is a high-touch, or high-risk activity, showering COVID-19 residents that require assistance,” he said. “It is virtually impossible to keep the PPE that is protecting the employee and the resident from becoming wet and compromised.”

“For these reasons,” he continued, “nursing homes under guidance from public health officials are much more often bathing residents in their beds, in accordance with CDC guidance.”

Official word from the Connecticut Department or Public Health and the Centers for Disease Control is limited on the topic.

“We haven’t seen common showers as an epidemiolgic link between cases in congregate living settings. We (CDC or DPH) have no formal recommendations about this at this time, and facilities can decide how they want to proceed, knowing the potential risks,” said Leung.

But when addressing the state’s nursing homes directly, she did advise caution.

“The unexposed residents should be able to shower in the common shower. I would say exposed residents can shower in common showers if the shower area and Hoyer lifts and high-touch surfaces can be carefully wiped down with disinfectant (following product label instructions) between resident use. Same would be for the COVID-19-positive cohort,” she said. “If a facility is unable to implement this well, then they can choose in-room hygiene. In general, showering is a good idea for hygiene purposes, but it can be a high-contact patient care activity.”

The CDC has not weighed in at all.

“CDC doesn’t have specific guidance to showering in congregate settings,” CDC Spokesman Bert Kelly said when asked about the state’s suspension of showers for certain inmates in prisons and jails, another congregate living environment. “Individuals who are in medical isolation or quarantine should ideally have their own bathroom dedicated for their [use]. If people are cohorted, then this would mean having dedicated bathrooms for those in medical isolation, and dedicated bathrooms for each quarantine cohort. We do not state that showers should be limited for people in these situations, only that the locations should be segregated to prevent transmission.”

With the absence of concrete guidance coming from the state or federal government, state Sen. Gary Winfield, D-New Haven, co-chairman of the legislature’s Judiciary Committee, said Connecticut’s 231 nursing homes are being left to make the call themselves. 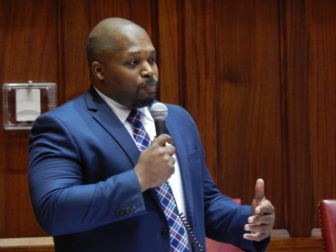 “What I know seems to suggest the rules are not necessarily hard and fast across all nursing homes. The concept of showers not being offered at a nursing home seems to be more likely an outgrowth of a lack of a rule, as opposed to a universal rule put out by an executive order,” he said, adding that he and his legislative colleagues are feeling “a rising level of frustration with what we’re doing with nursing homes.”

The state should issue clearer guidance for nursing homes to follow on residents’ bathing during the pandemic, Winfield said. “If I’m holding the guidance in my hands, it should be clear to me what I should be doing, and what I should not be doing.”