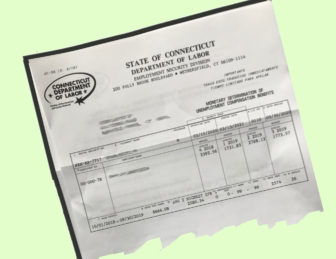 Even before the coronavirus slammed the economy, Connecticut’s unemployment trust fund had only about half the amount it would need to weather a recession. Now, as the pandemic is creating an unprecedented need, the state will have to borrow huge sums from the federal government to pay the avalanche of unemployment claims.

It is a debt Connecticut businesses will eventually have to shoulder.

“Every dollar that the state borrows means businesses in Connecticut are going to pay it back because the state does not pay any money into the trust fund,” said Eric Gjede, Connecticut Business & Industry Association vice president of government affairs.

According to the U.S. Department of Labor, Connecticut had a little more than $700 million in its unemployment trust fund in February before the pandemic hit. According to the federal agency, however, the fund needed at least $1.5 billion to handle an economic downturn.

Juliet Manalan, spokesperson for the Connecticut Department of Labor, said that, as of Monday, the trust fund had a $278 million balance and the administration anticipates it will have to borrow from the U.S. Labor Department by mid-July.

“At this time, it is unknown how much we will have to borrow,” Manalan said. “We are still running projections to determine how much may be needed for July, August and September.”

In the CARES Act, Congress also authorized a $600-a-week federal benefit in addition to state unemployment benefits. A University of Chicago study released last month determined the $600-a-week payments, combined with a one-time $1,200 stimulus check most Americans received, kept the nation’s poverty rate from growing during the pandemic-led recession and has even lifted some families out of poverty. 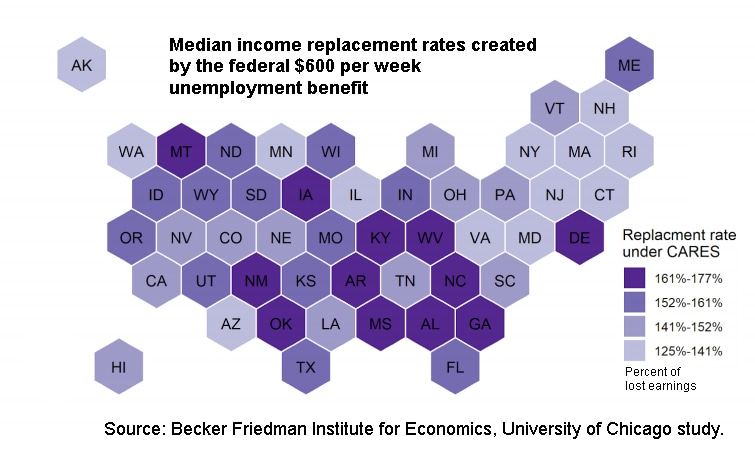 The University of Chicago study estimated Connecticut’s rate of benefit as between 125-141 percent of the average worker’s lost wages.

The study also observed, as did Gov. Ned Lamont, that the federal payments, as Lamont put it: “sometimes it discourages work.” The governor said he is opposed to U.S. House Democratic efforts to extend them.

Gjede said Lamont “received a lot of criticism for what he said.” 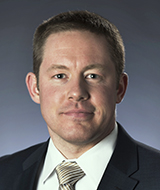 But Gjede also said he’s heard from Connecticut companies who have told him their employees don’t want to return to work because of the federally boosted unemployment benefits. “There’s no question that the federal unemployment stimulus is causing big problems,” he said.

One ongoing problem for Lamont is that the jobless in Connecticut are also eligible for 26 weeks of state-paid benefits, and the sharp increase in state claims has put the governor in the position of having to borrow money from the federal government to continue to pay them.

Any money borrowed would be interest free through the end of the year.  But as of New Year’s Day, any outstanding balance would be subject to an interest rate of about 2.4%, largely because Connecticut failed to have a fully solvent unemployment trust fund in years past.

In fact, according to the federal government’s 2020 Trust Fund Solvency Report, Connecticut has not had a fully solvent unemployment trust fund since 1999, more than 20 years ago.

And now that trust fund is under unprecedented strain.

From March 13 to June 15, Connecticut received more than 600,000 new unemployment claims and paid out $884 million in state unemployment benefits. While the pace of new filings is slowing, the unemployment rate in Connecticut is expected to be high well into next year.

Lamont said he’s asked the help of members of Connecticut’s congressional delegation to promote legislation turning the state’s loans from the federal government into a grant that would not need to be repaid.  It is probably wishful thinking.

Like Connecticut, many states were not fully solvent before the coronavirus plunged the nation’s economy into recession. Those states — and  probably every other state in the union —  will need to borrow money to pay unemployment claims, too. Forgiving all those loans would cost the federal government hundreds of billions of dollars.

“There’s no question that the federal unemployment stimulus is causing big problems.”

The idea of loan forgiveness “is certainly in the hopper,” said Rep. John Larson, D-1st District, and could be supported by the Democratic-controlled House as part of new stimulus legislation.

“But likely supported by the Senate or the White House? God bless you,” Larson said.

Another possibility is that Congress could loosen restrictions on the share of pandemic emergency money the state has received already from the federal government, some $1.4 billion, so that it could be used to plug holes in state budgets – and  replenish unemployment trust funds.

States are also asking Washington D.C. for more coronavirus emergency money. House Democrats have complied, approving nearly $1 trillion in pandemic aid for state and local governments in massive stimulus bill called the HEROES Act. But that bill, so far, has been ignored by the GOP-led Senate.

A ‘killer’ for businesses

The last time Connecticut borrowed money to pay unemployment claims was in 2009, during the Great Recession. The state – or rather Connecticut businesses —  did not pay off that $1.2 billion debt until 2016.

Unemployment trust funds are funded through state unemployment taxes paid by employers and remitted to the federal government, which has a separate trust fund account for each state.

Earlier this year Lamont signed an executive order so that layoffs tied to the pandemic would not impact a company’s rate. But that order expires along with the governor’s emergency powers at the beginning of September.

Gjede of the CBIA is concerned the state will at that point reassess the employment history of all Connecticut businesses for the year and that any firm that laid off employees would face a higher assessment.

In addition, a 6 percent federal payroll tax, known as the Federal Unemployment Tax Act (FUTA) tax, is levied  on businesses on the first $7,000 of covered workers’ earnings. Employers remit the tax but can claim credits against 5.4 percentage points of FUTA taxes paid in states like Connecticut, effectively shrinking the  FUTA tax rate to 0.6 percent, or a maximum of $42 per worker.

Lamont could also choose to reduce that credit, just as Connecticut’s government did after it borrowed  trust fund money during the last recession. The interest on that loan was repaid from a special assessment billed to employers, and Manalan of the state labor department said interest on a new rust fund loan would be paid the same way.

Gjede said the initial special assessment was $25 for each employee, payable the first of August and reduced in subsequent years as the debt was whittled down.

“It was a killer for a lot of businesses,” Gjede said.

Every $1,000 increase in the taxable wage base would generate about $56 million in additional revenue to the Trust Fund, she said. “The business community has refused to adjust the wage base in good times, and they cannot now complain about the predictable results of their obstinance.” 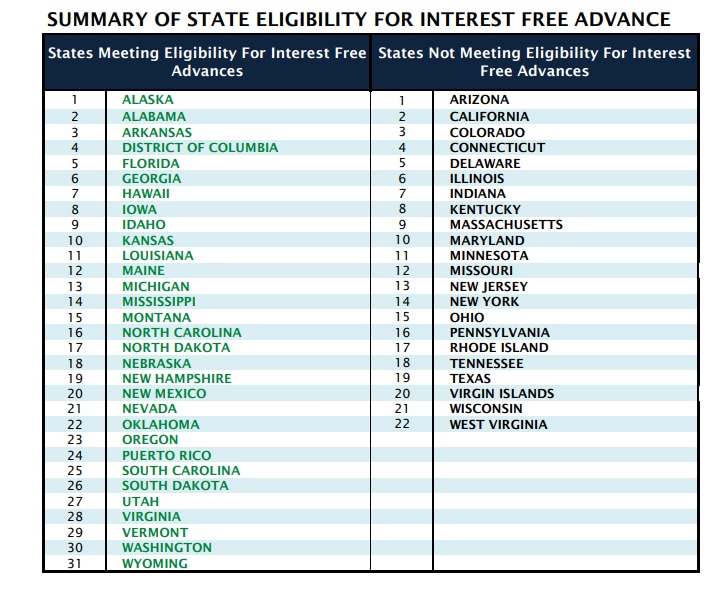 Connecticut is one of 22 states ineligible for an interest free loan from the U.S. Labor Department.