Washington – Some of Connecticut’s largest municipalities have some of the worst response rates in the nation to the U.S. Census. Whether those jurisdictions get a full count will depend largely on the outcome of increasingly testy negotiations in the next congressional stimulus bill.

Congressional Democrats and Republicans both agree that the U.S. Census Bureau should receive more money in the next pandemic emergency bill Congress considers, at least $400 million.

But Democrats say the Census Bureau needs more time, as well as more money.  Echoing President Donald Trump, Republicans want the Census Bureau to wrap up its work by a statutory deadline of Dec. 31, the date a full count of the nation’s population must be delivered to the president.

Some say the census can’t have an accurate count by that deadline, especially since the work of “enumerators,” the census takers who  go door-to-door to areas with poor response rate, will be cut by several weeks.

Under pressure from the Trump administration, the Census Bureau has indicated it would roll back the date by which it concludes its on-the-ground counting, from Oct. 31 to Sept. 30. That has outraged Democrats and others who want the census to make the most accurate count.

“The Trump Administration’s efforts to recklessly rush the 2020 U.S. Census will risk an egregious undercount of our nation’s population,” said Lt. Gov. Susan Bysiewicz, the Lamont administration’s point person on the census.

She said “forcing the U.S. Census Bureau to rush the enumeration process will leave our most overlooked communities – particularly communities of color and immigrants – shortchanged for the next decade.”

If the Census Bureau can’t reach all households, it makes statistical imputations to make  educated guesses about how many people live in hard-to-count areas.  While that method has  been used in past censuses to identify perhaps 1 percent of the population,  a shortened census might require experts to guess at perhaps 10 or 15 percent of the population in some places.

Connecticut’s census response rate, as of Monday, was 66.7%. That’s higher than the national response rate of 62.9%. 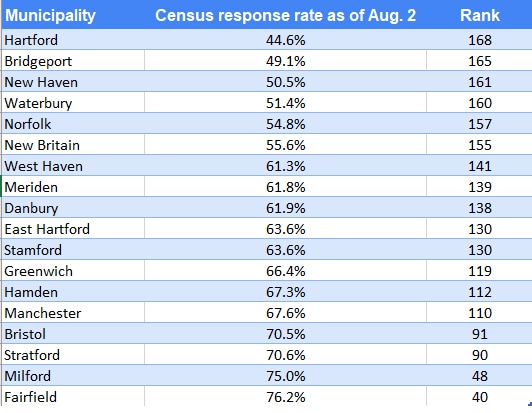 The U.S. Census Bureau sent enumerators to begin visiting non-responding households in Hartford on July 20 and to Danbury on July 30. The door-to-door canvassing will begin in New Haven on Thursday.

But the work of the census takers has been made more difficult because some have reportedly quit, citing concerns about contracting the coronavirus.  That’s another reason to push back the  deadline for census takers to finish their work to Oct. 31, advocates say.

Jeff Shaw, senior director of advocacy at the Connecticut Nonprofit Alliance, also said “wrapping up the census ahead of schedule is not the best way for all people to be counted.”

Shaw said the pandemic overshadowed the decennial count, prompting many Americans to put a response to the census, which can be done online, on the back burner and appeals for people to fill out their census forms have been drowned out by public pronouncements about the pandemic.

“It isn’t getting as much promotion as it should,” he said.

Like Bysiewicz, Shaw said there is a lot at stake for the state if census operations are not successful.

Connecticut receives billions of dollars each year from the federal government through formulas that use census data. In 2017, the last year for which this information is available, Connecticut received $18.9 billion in census-dependent federal dollars.

“If you get it wrong, you are going to have it wrong for 10 years,” Shaw said.

The census also has political implications, determining how congressional district lines are drawn; and it provides a treasure trove of demographic information used by businesses, government, academics and others.

Shaw said he, and non-profits across the nation, hope Congress will give the U.S. Census Bureau more time to begin its work in the stimulus bill under negotiation in Congress.

Republicans have not agreed to push back Census Bureau deadlines, something congressional Democrats are insisting upon. Not only do the Democrats want enumerators to be on the streets until Oct. 31, they also want the December 31 deadline for the U.S. Census to give its report to the president to be pushed to April.

There are bigger hurdles to a stimulus deal, of course. One involves unemployment insurance, with Democrats seeking to extend a $600-per-week federal benefit into 2021, while Republicans want to dramatically scale back the payment. Another partisan dispute involves  hundreds of billions of dollars in new aid to state and local governments to prevent a wave of employee layoffs, which Republicans have rejected.

Sarah Eisele-Dyrli of CT Data Collaborative said it’s “disturbing” the census will not spend more time reaching out to residents in some of Connecticut’s largest and most racially and ethnically diverse towns, home to many low-income families.

She said those areas have suffered historically from “structural racism and disinvestment.”

“Now they stand to lose a lot more,” Eisele-Dyrli said.

Not counting the undocumented

Advocates of a comprehensive census count have also condemned Trump for issuing a memorandum last week that said undocumented immigrants should not be counted for congressional apportionment, which legal experts say would be unconstitutional.

Almost immediately after the president’s action, Connecticut joined a lawsuit led by New York aimed at blocking Trump from imposing that restriction.

They base their lawsuit on the Fourteenth Amendment of the U.S. Constitution, which requires that elected Representatives be apportioned among the states based on the “whole number of persons” living in each state.

The states say undocumented immigrants are “persons,” so the “whole number of persons” counted has always included immigrants, whether documented or not.

“The Constitution requires counting all ‘persons’ in the census. Immigrants are people. End of story,” said Connecticut Attorney General William Tong.”This order is a naked attempt to deny full representation and funding for states that welcome immigrants and for communities of color. It is unequivocally unconstitutional and must be blocked.”