Lamont extends eviction moratorium for tenants behind on rent 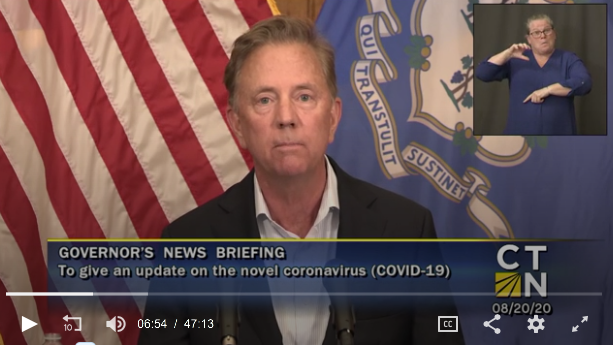 Gov. Ned Lamont gave a briefing Thursday on the state’s response to COVID-19.

Gov. Ned Lamont said Thursday he will use his emergency powers to extend until October the ban on evictions, a step that will require him to either declare a new public health emergency or seek legislative support for the dozens of orders that otherwise expire on Sept. 9, the last day of the six-month emergency declared in March.

During a late-afternoon briefing, Lamont confirmed what has been clear for weeks: Connecticut’s battle with the novel coronavirus that causes COVID-19 would not expire with the emergency order. The state reported 118 new infections Thursday among the 12,415 latest tests, a positive rate of just under 1%.

Connecticut passed the one million-mark in tests Wednesday. After six months, Connecticut has recorded 51,432 cases of COVID and 4,458 deaths attributed to the disease.

His executive orders have been far-reaching: Initially closing schools, restaurants and retailers, then setting the terms for their reopening, including the mandatory wearing of masks.

Tenants have been shielded from evictions since April, when the Democratic governor signed an executive order restricting landlords and the courts from removing renters unless they pose a danger to other residents or the property.

On the eve of that order expiring – and as pressure mounted from landlords to allow them to evict tenants who they say are taking advantage of the pandemic by not paying rent – Lamont said he plans to give tenants six more weeks to catch up.

“What you can’t have in the middle of this unemployment crisis is a lot of people being evicted and a lot of people losing their homes, so we’re going to do everything we can to extend out the period of time and make it easier for people to stay in their [homes],” Lamont said. “I’m trying to get people back to work and having a home that you can call your own is a really important foundation for making that happen.” 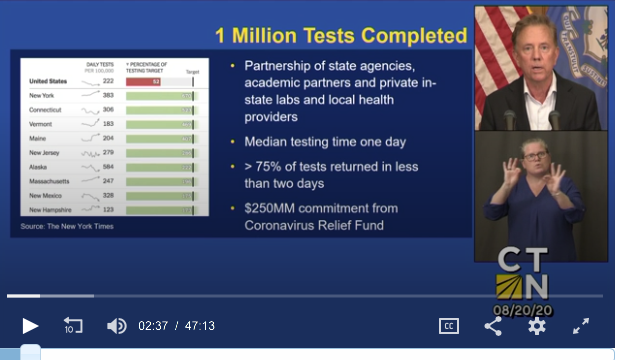 The governor lauded the state’s response to the pandemic, particularly highlighting the fact that the state has crossed the 1 million test milestone.

The decision comes on the same day the Connecticut Department of Labor announced that the state has recovered only 45% of the jobs that were lost when the economy abruptly shut down in mid-March. It also comes nearly three weeks after the $600 boost in weekly unemployment benefits expired from the federal CARES Act that provided a financial backstop for many tenants.

A federal eviction moratorium expired earlier this month that protected those living in numerous properties in Connecticut.

President Donald J. Trump signed an executive order earlier this month directing federal agencies to consider how they can help people in danger of eviction, but it does nothing to stop landlords from moving forward with evictions and courts from ruling on those cases.

That has left renters with no protection unless the governor or legislators put their own moratoriums in place.

Three Republican state representatives – who are lawyers and whose clients are landlords – have been attempting to get Lamont’s moratorium thrown out in federal court. That decision may be a long way off, however, as a federal district judge last week refused to issue an injunction to immediately end the eviction moratorium.

The president’s executive order also provided states with an avenue to boost weekly unemployment benefits by $300 a week. Lamont said Thursday the federal government has clarified the state would not need to increase its spending on unemployment compensation to participate and Connecticut is in the process of compiling its application to submit.

“We are going to be applying for that money right away,” Lamont said.

Eleven states have already applied for that boost and been approved, CNBC reports, but concerns are mounting that the aid won’t last long.

“This can’t go on forever,” he said of the state’s eviction moratorium. “I hope [the federal government] will include relief for some of our beleaguered homeowners and renters just to give them some certainty going forward.”

The state has set aside $20 million to help people struggling to pay rent during the pandemic. That money — received from the federal CARES Act — is running thin. That aid is enough to help provide help to $4,000 to 5,000 people. Nearly 3,900 people have qualified for aid so far.

Erin Kemple, executive director of the Connecticut Fair Housing Center, a civil rights organization that advocates for those struggling with housing insecurity, welcomed the extension of the eviction moratorium.

“This is very good news for the tenants in Connecticut who are still unsure how they are going to pay the rent that is still due since the beginning of the pandemic. We can only hope that there will be more financial assistance for landlords and tenants coming,” she said.

The governor is pushing for the General Assembly to convene in early September to extend a host of the emergency orders he put in place during the pandemic, but he declined to say whether he wants the legislature to broaden the scope of the session to also take up other issues, like providing state-funded rental assistance or tackling the education emergency the schools are facing during the lingering pandemic.

His chief of staff, Paul Mounds, said they are still negotiating with legislative leadership about what will be on the agenda. But Lamont suggested it made more sense to issue a blanket extension, rather than a review of every executive order.

A week after staff vaccination deadline, about half of CT nursing homes had rates under 96%

Hanes got out of the mask business. Connecticut is trying.

Once, Connecticut couldn’t get masks at any price. Now, it can’t get rid of 202,500 masks made by Hanes.

Lamont ups pressure on state employees to get COVID-19 vaccinations

Connecticut has begun to suspend permanent state employees who are not vaccinated or being tested for COVID-19.