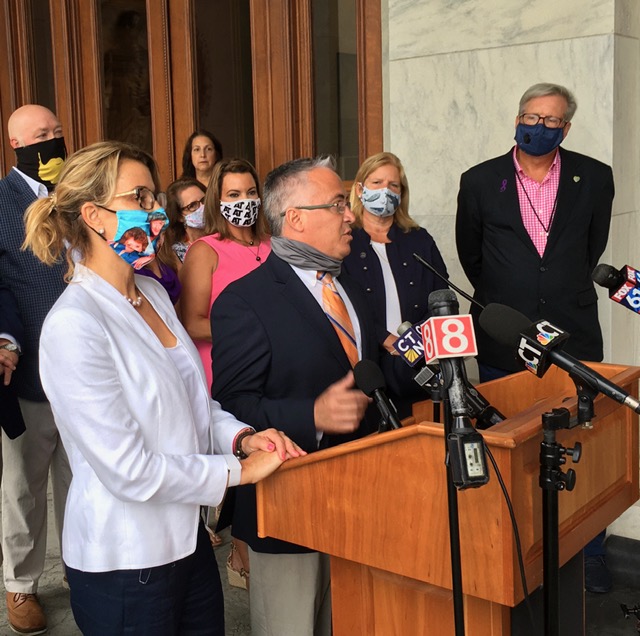 Republicans held a press conference objecting to the governor’s extension of his emergency powers. Rep. Vincent Candelora, R-North Branford, is at the microphone.

Fraying for weeks, the last vestiges of bipartisan support for Gov. Ned Lamont’s use of sweeping emergency powers to manage the COVID-19 pandemic came undone Wednesday at a press conference on the north portico of the State Capitol.

The House Republican caucus said the Democratic governor’s continued use of emergency powers six months after the first COVID cases were detected must be curbed.

The emergency powers undisputedly are an intrusion into legislative prerogatives, allowing him to essentially mandate temporary laws. But the GOP struggled to articulate exactly which of those temporary measures should be overturned.

Do they want to vote on visitation rules at nursing homes? The continued closure of bars and the limits on public gatherings? The mandates to wear masks in stores? The flexibility afforded cities and towns on schools?

Lamont has signed 73 executive orders under the emergency powers he asserted on March 10 under the terms of two state laws. The first two dozen orders came in the first frantic month of a pandemic that eventually claimed nearly 4,500 lives in Connecticut so far.

Republicans called the press conference in response to the declaration Lamont signed Tuesday extending his emergency powers for five months, until Feb. 9. Without a new declaration, dozens of COVID restrictions were set to expire on Sept. 10.

“Let’s make no mistake about it: We all understand we are still in a public health emergency,” said House Minority Leader Themis Klarides, R-Derby.

But Klarides said the situation is not as volatile as in the spring, and the legislature should resume more of its traditional role in crafting laws and regulations.

“March in Connecticut does not look anywhere near the same as Connecticut in September looks. And because of that, the way we govern has to look different,” Klarides said.

Klarides, who is not seeking re-election, was joined by her likely successor as caucus leader, Rep. Vincent Candelora, R-North Branford, and other House Republicans — most, if not all, who are candidates for re-election in November.

The news conference had an undeniable political dimension, a signal to restive constituents that Republicans are willing to assert themselves. But the speakers took care not to take issue with specific public health directives issued by Lamont that have broad support.

Instead, they talked about process, the need for Lamont to better respect the role of the legislature and consult its members.

“We need to be in the room,” Candelora said.

“This is not a criticism on how the governor has handled things,” said Rep. William Petit, R-Plainville, a physician and member of the legislature’s Public Health Committee. “As you are well aware, Connecticut’s in pretty good shape compared to many states across the country. This is about our democracy and our representative form of government.”

Lamont said Republicans need to be specific: Do they want the bars to open up faster, the schools slower?

“Which EOs do you want to change?” Lamont said, referring to executive orders. “Don’t just say, ‘I hate the process.’ Tell us what you want to do differently.”

Paul Mounds, the governor’s chief of staff, said Klarides and other legislative leaders met Monday with the governor and his top aides, but she offered none of the objections then that she raised Wednesday.

“At no point did Themis Klarides speak up,” Mounds said. “She might have spoken up when the governor was not in the room.”

Lamont’s declaration takes effect on Friday unless a special committee of 10 legislators — the six top leaders, plus the co-chairs and ranking minority-party members of the Public Health Committee — convene and vote to overturn the governor.

Democrats, who control both chambers of the General Assembly and hold six of the 10 seats on the special committee, have showed no interest in calling a meeting that is necessary only if the governor is overturned.

But Klarides said a vote should be taken on extending the governor’s emergency powers, even if it is not legally required. If Democrats support the governor, she said, they should be willing to go on the record with a vote. The Republicans would vote against the extension, she said,

By opposing the extension, Senate President Pro Tem Martin M. Looney, D-New Haven, said the Republicans are acting as though they believe the pandemic is over. Otherwise, he said, they would not suggest an abrupt end to the COVID restrictions in 10 days.

While the legislature showed during a special session in July that it can safely meet, the General Assembly in the best of times is ill-equipped to rapidly review 73 executive orders, decide which should stay or go, reduce those decisions to legislation, hold hearings and committee meetings, then vote on each one, Looney said.

The administration can move quickly, changing course as easily as a small sailboat, Looney said.

“The legislature is more like a battleship,” he said. “It takes a long time to turn around.”

Klarides and nearly all the Republican caucus members on the portico wore masks. An exception was Rep. Anne Dauphinais of Killingly, who is helping to promote “a freedom rally” on Thursday for people opposed to COVID restrictions and Lamont’s ability to unilaterally continue them.

“When you have one person making all those decision, the people don’t feel like they have a voice,” she said.

Dauphinais said she believes wearing a mask should be voluntary. She said she doubts their efficacy in preventing the spread of COVID, despite the advice of the Centers for Disease Control and Prevention and a broad medical and scientific consensus.

CDC’s review of the latest science behind masks led to the agency’s unqualified support in July.

“We are not defenseless against COVID-19,” said Dr. Robert R. Redfield, the CDC’s director. “Cloth face coverings are one of the most powerful weapons we have to slow and stop the spread of the virus – particularly when used universally within a community setting. All Americans have a responsibility to protect themselves, their families, and their communities.”