Smalley Academy in New Britain, where the overwhelming majority of students are Latino and Black students. The district is also one of the most underfunded districts in the state and lowest-achieving.

The state’s school funding formula is failing to bridge the divide between what rich and poor towns can afford to spend on educating their students. To close these yawning disparities, the state needs to spend anywhere from an additional $338 million to $1.7 billion more a year.

These are the conclusions of a trio of analyses on how the state funds its schools. Those studies – by the New England Public Policy Center, the School and State Finance Project, and the Rutgers Graduate School of Education – were provided to the CT Mirror this week.

The Federal Reserve Bank of Boston’s New England Public Policy Center pegged the annual cost of closing this gap at between $940 million and $1.7 billion, depending on how many additional students are helped by the additional funding.

“There are large disparities in spending across school districts. Many districts’ spending is inadequate to achieve the statewide average student performance level, given their higher costs. Ensuring that every district is financially equipped to reach that performance target would require a significant increase in school spending,” authors Bo Zhao and Nicholas Chiumenti write. “Statewide 51.5% of public school students were enrolled in districts where spending was inadequate for achieving this target.”

For example, in Hartford, where the overwhelming majority of students come from low-income families and are Black or Hispanic, the policy center finds the district would need to spend an additional $7,780 per student – a 47% boost – to keep up with the state spending and performance averages. The shortfall is so glaring because students who live in poverty or in a single-parent household typically cost more to educate at the same level as their better-off peers, the authors conclude. Meanwhile, wealthy suburban districts with minimal diversity are spending well over what is necessary.

While the Federal Reserve’s analysis is based on school spending and students test outcomes between 2009 and 2013, research based on more recent spending numbers shows these disparities fester.  The authors of the report said that this was the most recent time frame they could use because the state transitioned to a new test in 2014, but regardless said spending has remained relatively stable since then.

An analysis by The School and State Finance Project found that the state’s school-funding formula is $338 million short of leveling the playing field between the Black and Hispanic students attending segregated traditional public schools and the students attending suburban schools with few minorities. Charter schools, which are also overwhelmingly segregated, would need $52 million more to bridge the gap. There is no disparity in magnet schools, the bulk of which were opened in the wake of a landmark school desegregation case.

“These startling funding gaps show Connecticut’s school districts suffer not just from vast racial segregation but from segregation of opportunities. These funding gaps are more than just numbers in a report. Each gap represents the financial resources and educational opportunities that continue to be inaccessible for many of Connecticut’s students of color as a result of inequitable education funding, a property tax system in dire need of reform, and longstanding segregation across our state’s cities, towns, and school districts,” said Katie Roy, the executive director of the School and State Finance Project.

The legislature and governor have pumped slightly more aid each year into the state’s primary K-12 grant – the Education Equalization Grant – and Connecticut is slated to spend an additional $39 million a year for each of the next seven years, unless the state’s potentially rocky fiscal future changes that.

But, even this funding increase won’t change much, the study found. Even if the state were to fully fund the grant this year, the state’s most segregated districts would still need $151 million more to bridge the divide.

“There just isn’t enough state aid available. It’s like trying to fix a broken pipe with a roll of scotch tape,” said Roy.

A philosophical tug-of-war over how Connecticut should fund its public schools has been debated at the state Capitol for decades. On one side you have those that say the state should hire a team of experts to determine how much it will actually cost to provide students with an adequate education. With that cost estimate, the state should base its school-funding formula around. On the other side, you have those who say costing-out education is an impossible task and state spending should not be beholden to such a study.

What Connecticut has instead is a funding method based largely on how much the state can spend. The state’s formula arbitrarily starts with every student receiving roughly $11,000 a year, and then is adjusted up or down based on specific factors, like the wealth of the student’s school district or whether the student comes from a low-income family.

There seems to be little appetite to change this method anytime soon. The state’s current funding formula is somewhat on autopilot, the result of a bipartisan budget passed as the General Assembly waited in 2017 for the Connecticut Supreme Court to decide whether the state was adequately funding its schools.

The Supreme Court ultimately decided it was, and legislators seem loathe to handle the hot potato of school funding reform.

On the national stage, Connecticut’s segregation stands out, largely the result of the housing policies that barred working class, low-income families from moving into communities like Weston and Westport.

This isolation – and state and federal inaction to equitably fund schools – has a significant impact on Connecticut’s Latinx students, said Bruce Baker, a professor at Rutgers Graduate School of Education.

His research has found that Connecticut has the strongest spending disparities in the U.S and individual school districts here are among the most disadvantaged financially in the country. New Britain comes in second place, Bridgeport third and Waterbury 17th for their amount of revenue and poverty compared to neighboring districts. 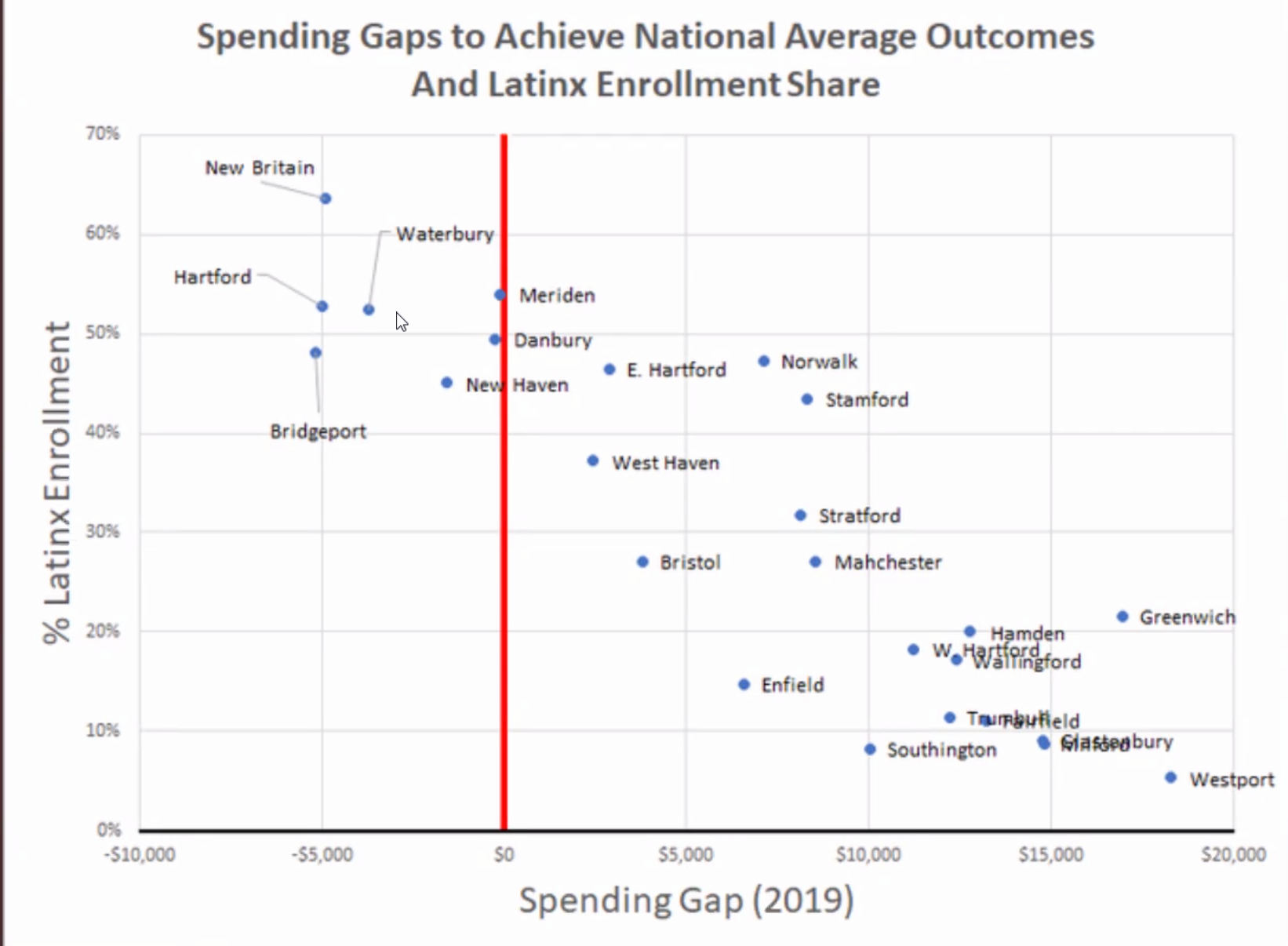 His research – conducted with researchers at The University of Connecticut – also shows, however, that Black student populations have fared somewhat better because of the desegregation remedies that drove funding to open magnet schools in the predominantly Black districts of Hartford and New Haven.

An analysis Baker provided Wednesday to the CT Mirror shows it would cost an additional $374 million to close the spending gap for Connecticut’s segregated school districts and spend enough to provide students the opportunity to reach national averages for outcomes.

“The gaps for places like Bridgeport, Waterbury, and New Britain are just huge,” he said of the spending levels. “We know that it costs more to achieve the same outcomes in districts that are higher in poverty, more racially isolated, have more English learners. … It might cost 75% more to achieve national average outcomes.”