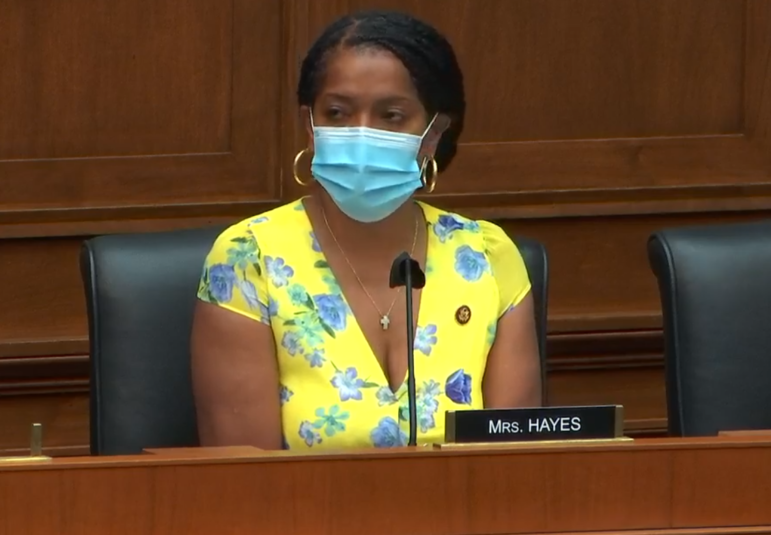 Washington – Rep. Jahana Hayes, who has tested positive for COVID-19, said Monday she feels “OK,” although her breathing is becoming more labored.

“I was attributing my shortness of breath to allergies, but clearly it is not allergies and my breathing is getting progressively more labored,” Hayes said in an email. “ Spiked a fever yesterday which has gone down after taking Tylenol.”

Hayes said a staffer she had worked closely with had tested positive Saturday for COVID-19. The lawmaker tested positive Sunday. Hayes said that “due to privacy” she would not say whether the infected staffer worked in her Waterbury or Washington D.C. office.

She also said that infected individual is the only staffer that has, at this point, tested positive for the coronavirus.

“All of my staff in both offices have been tested,” Hayes, D-5th District, said. “So far only the staffer mentioned has come back positive.”

Hayes’s illness did not stop her GOP opponent, David X. Sullivan, from continuing his attacks on the lawmaker on Monday.

In a release, Sullivan knocked Hayes, a former National Teacher of the Year, on the issue of school resource officers.

“Where does Jahana Hayes stand on the issue of keeping School Resource Officers in our public schools?” the Sullivan campaign release said. “It’s hard to know for sure. She won’t say if she agrees with Chris Murphy and his dangerous effort to defund and remove School Resource Officers from our public schools. She won’t say if she disagrees with him, either.”

Hayes said her family has been tested and her husband Milford Hayes, a Waterbury police officer who tested positive for COVID-19 in April, will have an antibody test this week.

“It will be a few days before we get my son’s results,” Hayes said.

The U.S. House will resume its work in Washington D.C. on Tuesday. But Hayes will remain in quarantine with her family at her home in Wolcott.

On Sunday, she said the difficulty she and her staff have had getting a COVID-19 test “underscores the need for a national testing strategy with a coherent way to receive speedy, accurate results.”

Hayes said she went to two urgent care clinics on Saturday and was unable to be tested at those facilities.

“Contrary to popular belief, members of Congress do not get tested regularly,” she said. “In fact, we are not mass tested at all in DC. Masks, social distancing and frequent floor cleanings are the precautions that are taken in the House. I have taken every possible precaution and still contracted the coronavirus.”

According to Govtrack, 70 Members of Congress have been quarantined, tested positive for COVID-19 or have come in close contact with someone with COVID-19.