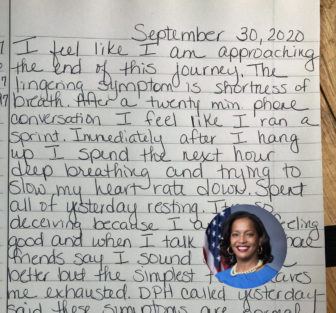 Rep. Jahana Hayes, who announced she tested positive for COVID-19 nine days ago, wrote in her diary on Wednesday “I feel that I am approaching the end of this journey.”

Hayes is the latest of 17 members of Congress who have tested positive for the coronavirus and has been in quarantine in her home in Wolcott for about 10 days.

While she said she hoped she was in the final stages of the disease, Hayes also said she still suffers from shortness of breath and a cough, and has a sore throat.

“After a twenty-minute phone conversation, I feel like I ran a sprint,” she wrote in her diary, which she posted on Twitter. “I hang up and spend the next hour deep breathing and trying to slow my heart rate down. Spent all of yesterday resting. It is so deceiving because I am up feeling good when I talk on the phone.”

Hayes has continued to work, casting votes since Sept. 21 through a proxy, Rep. Joe Courtney, D-2nd District. As the pandemic raged in May, House Speaker Nancy Pelosi sought a change in House rules that allowed lawmakers to vote remotely through a proxy. The House Clerk said  “members designated as proxies may only cast votes on behalf of other members once they have received separate exact instruction with respect to each vote.”

Hayes said the Department of Public Health phoned her on Tuesday and told her her symptoms were normal “and I should feel a breakthrough around week 2.”

“I look forward to that,” she said.

She also said she is using a “breathing machine” which gave her “comfort” and a good night’s rest Tuesday night.

Hayes announced on Sept. 19 that a staffer had tested positive for COVID-19. She then detailed the difficulties she and her other staffers, both in Washington D.C. and in the Connecticut’s 5th congressional district,  encountered in getting tested.

She also said she contacted House leadership about putting in place more protections for members of Congress when they are at work in Washington D.C.

Pelosi’s office did not respond to a request for comment on Hayes’s request.