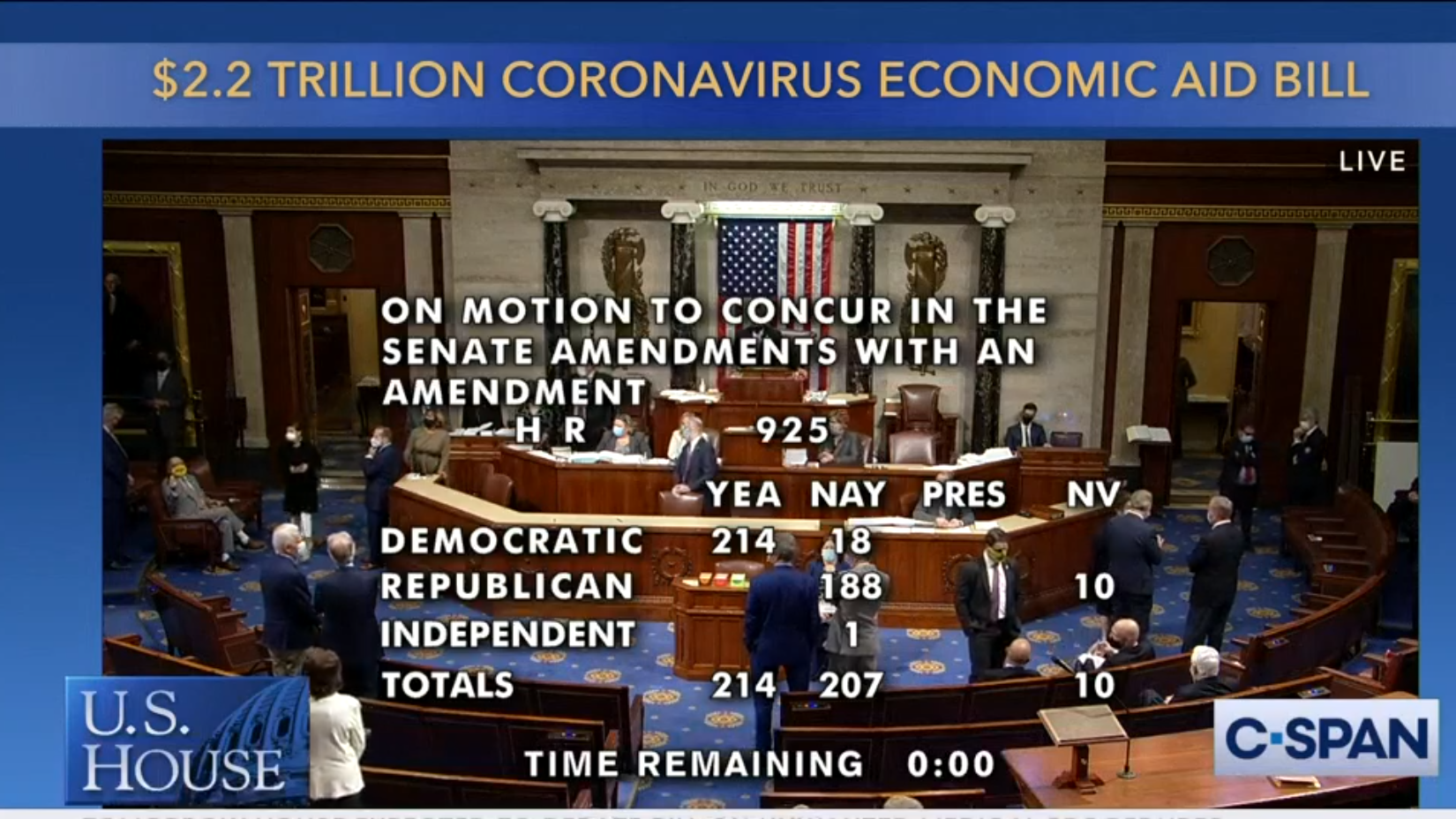 Washington – Despite ongoing negotiations with the White House over the next stimulus package, House Democrats on Thursday approved pandemic legislation that would send new $1,200 checks to most Americans and re-establish $600-a-week unemployment benefits.

The legislation, approved on a largely partisan 214-207 vote, is unlikely to become law because the GOP-led Senate is expected to ignore it.

Yet Democratic leaders said the $2.2 trillion Democratic House bill is not an exercise in legislative futility since it has set the framework for a deal with the GOP.

“Negotiations are continuing, and I hope we have a bipartisan agreement,” said House Majority Leader Steny Hoyer, D-Md. “But we also want to tell the American people where we stand.”

House Speaker Nancy Pelosi, who has been in negotiations with Treasury Secretary Steven Mnuchin over a new stimulus bill, called the Democratic legislation a “proffer to Republicans in the negotiations to address the health and economic catastrophe in our country.”

Rep. Jim Himes, D-4th District, called it “an effort to jumpstart negotiations with the White House and Senate.”

House Republicans complained it was too expensive and included provisions that did not directly address the pandemic. Some pressed for the House to take up a bipartisan $1.5 bill proposed by the “Problem Solvers Caucus.”

All of Connecticut’s U.S. House members voted for the legislation, although Rep. Jahana Hayes, D-5th District, cast her ballot by proxy through Rep. Joe Courtney, D-2nd District. Hayes is in quarantine at her home in Wolcott with COVID-19. But 18 Democrats voted against the bill and no Republican voted for it.

It’s more apparent each day that the impacts of the COVID epidemic will still be with us for months and months to come,” Courtney said.  “The American people are still in need of assistance, similar to the kind that Congress authorized previously in COVID bills that we passed on a bipartisan basis.”

The bill approved Thursday evening is a less expensive version of the $3.4 trillion HEROES Act the House passed in May. But it is just as comprehensive. The biggest difference is that many of its programs are funded for shorter periods of time.

That money for state and local governments, which the White House opposes, and COVID-19 lawsuit immunity for businesses, which Democrats oppose, have been sticking points in negotiations. There are, however, issues where Mnuchin and Pelosi can agree and prod the GOP-majority Senate to accept.

The slimmed-down HEROES Act would also reinstate $600 a week in federal unemployment benefits through next January. This amount, which some Republicans say is a disincentive for the unemployed to return to work, could be whittled down if a deal is reached.

The legislation would also send another round of stimulus checks to individuals and $2,400 checks to married couples, with another $500 per dependent. One change from the last stimulus check program is that full-time students who are younger than 24 and adult dependents also would be eligible for those $500 payments. That’s a change from dependent pay in the first round of checks, which only went to children under age 17. 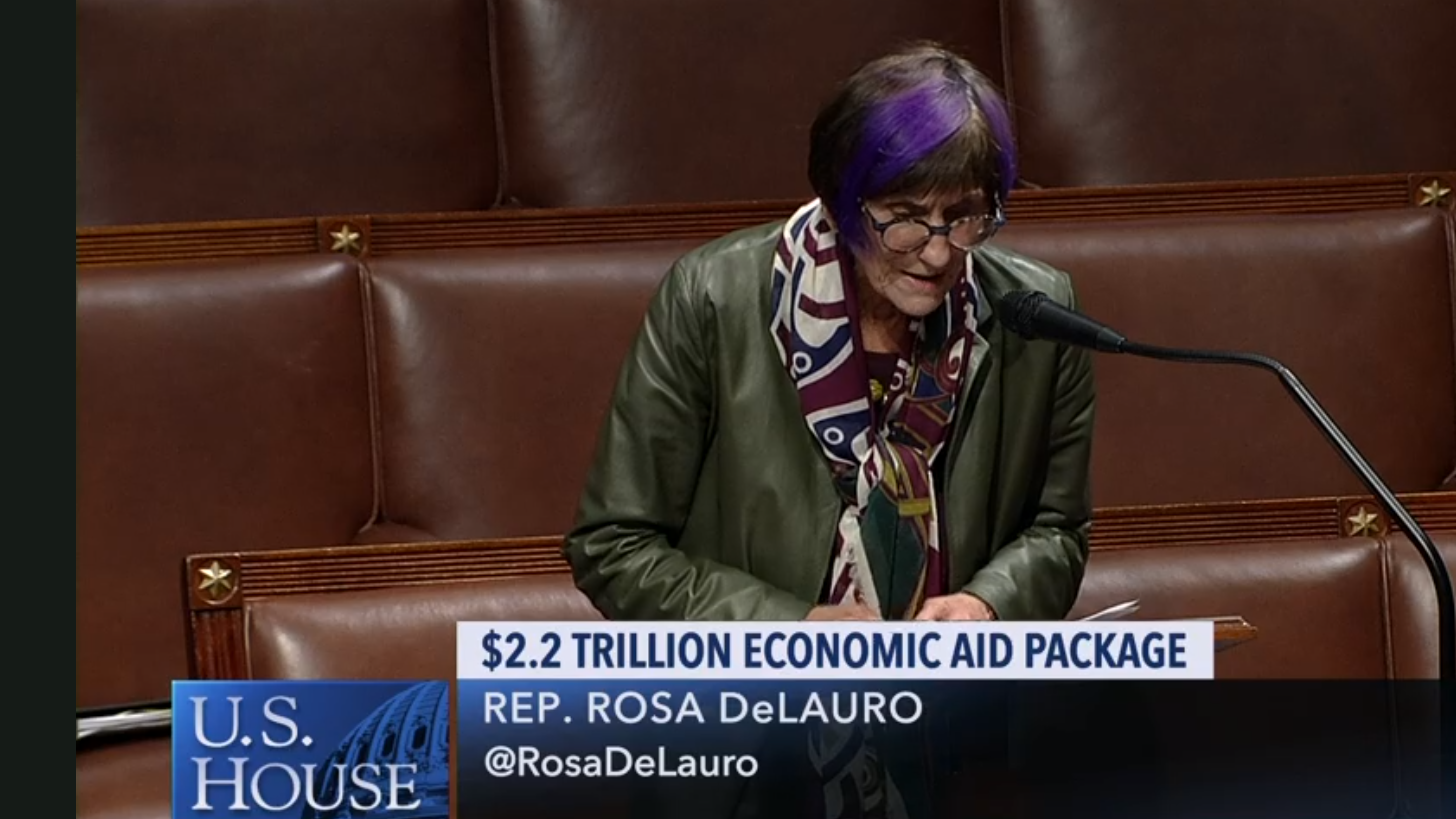 Rep. Rosa DeLauro makes a pitch on the U.S. House floor for the new stimulus bill.

The bill would also end the requirement that some Social Security and Supplemental Security Income beneficiaries pay back overpayments they have received during the pandemic.

“Due to the COVID-19 pandemic and through no fault of their own, Social Security and SSI beneficiaries may have received overpayments,” said Rep. John Larson, D-1st District. “Making beneficiaries repay these errors during a pandemic would be cruel.”

The bill would also provide $125 billion for the restaurant industry, and another $25 billion for the nation’s airlines, which are facing substantial furloughs since conditions from an earlier pandemic program that prevented airlines from furloughing employees expires Thursday.

“We do support more money for the airlines,” Mnuchin told CNBC on Wednesday. “That’s something that’s critical to keep our airline workers together.”

The legislation would also provide $225 billion for education funding, $993 million for hospitals and $50 billion for a Child Care Stabilization Fund that would allow states to give grants to child care providers.

Rep. Rosa DeLauro, D-3rd District, a senior member of the House Appropriations Committee who pressed for the bill’s child care grants, expanded food stamp benefits and other provisions in the bill, said “the people of Connecticut and of the United States deserve no less than the full support of the federal government to get them to the dawn of a recovery.”

“So let us put politics second, let us put the people first. For the people of this country, for the seniors, for the children and those who every day are looking toward the federal government. Because they are in desperate shape and they need our help. They need this legislation,” DeLauro said during debate over the bill.

Tens of billions of dollars are included in new HEROES Act to assist renters and homeowners in making monthly rent, mortgage and utility payments. Through a formula based partly on population and the number of unemployment claims, each state would receive no less than $80 million. The bill would also increase the maximum food stamp benefit by 15%.

Here are some of the other provisions in the revised Heroes Act: