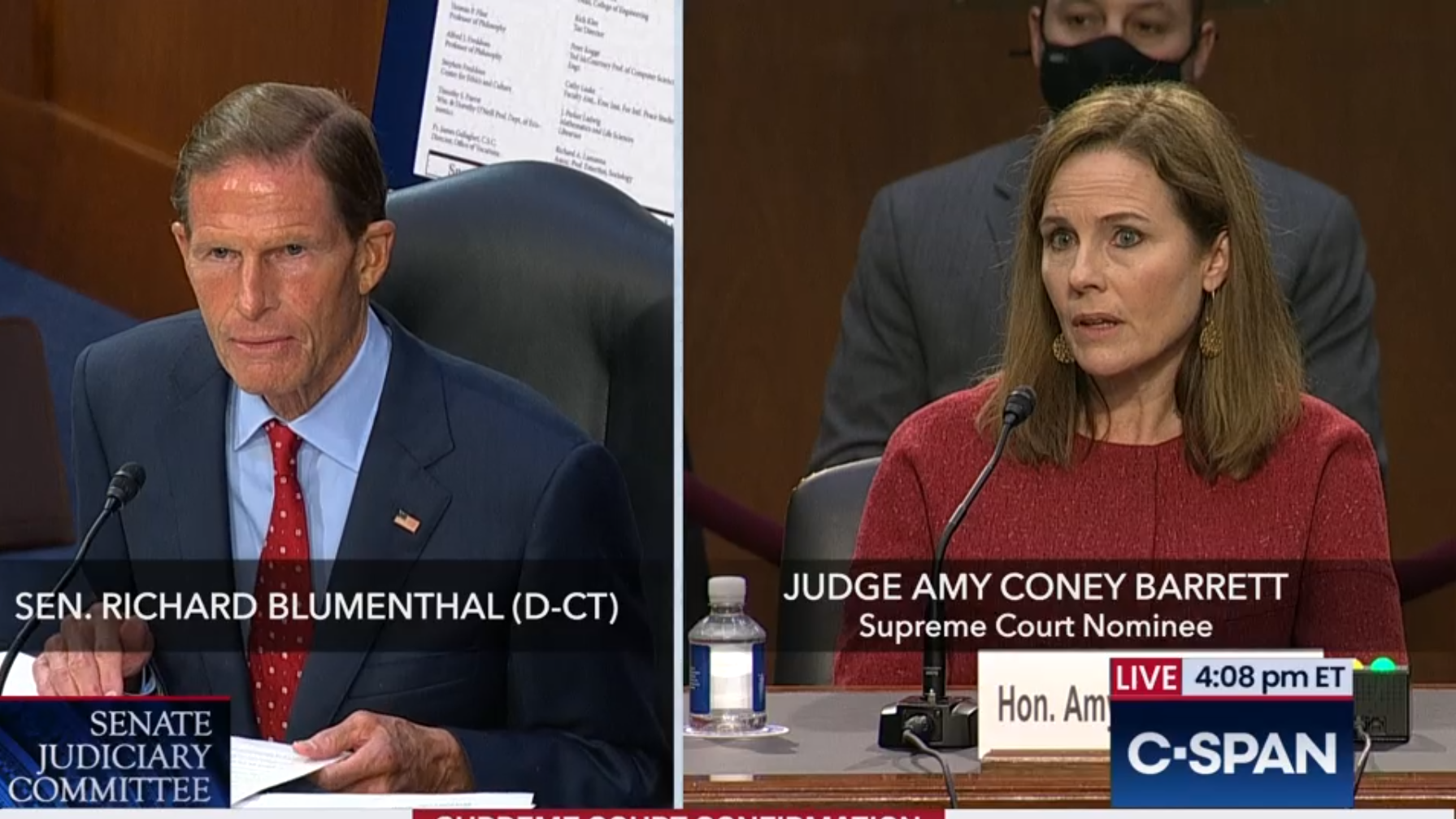 Washington —  Sen. Richard Blumenthal spent most of his allotted half hour Tuesday questioning Supreme Court nominee Amy Coney Barrett about her support for an organization that says life begins at fertilization and on her controversial dissent in a gun case.

In 2006, while working as a law professor at the University of Notre Dame, Barrett was one of hundreds of people, including her husband Jesse, who signed a full-page letter used in an advertisement sponsored by St. Joseph County Right to Life, an extreme anti-choice group located in the city of South Bend, Ind.

The advertisement, which appeared in the South Bend Tribune, said: “We…oppose abortion on demand and defend the right to life from fertilization to natural death. Please continue to pray to end abortion.”

Blumenthal, a member of the Senate Judiciary Committee, questioned Barrett about her support of the right-to-life group, which has opposed abortion even in cases of sexual assault or when the pregnant woman’s life is in danger. The group also opposes implantation or discarding of embryos, having implications for in vitro fertilization, which usually involves the creation of multiple embryos. It said it supports making the discarding of frozen embryos used in the in vitro process a crime.

As she had for hours during the Senate Judiciary Committee’s hearing, Barrett deflected the questions.

“The statements I signed from St. Joseph’s County Right to Life did not say anything about rape, incest or any of those things,” Barrett said. “It simply validated the teaching of my church on the sacredness of life and protection to natural death.”

As far as the criminalization of frozen embryos, Barrett said: “I am not a member of that organization, so I’m not responsible for statements they make.”

She also made a distinction between having opinions as a private citizen and expressing them or ruling on cases as a federal judge.

The ad, which ran in a University of Notre Dame newspaper, was sponsored by a faculty organization to which Barrett belonged called University Faculty for Life. It said “in the 40 years since the Supreme Court’s infamous Roe v. Wade decision, over 55 million unborn children have been killed by abortions,” and that the faculty and staff who signed it “reaffirm our full support for our University’s commitment to the right to life, we renew our call for the unborn to be protected in law…”

Blumenthal asked why Barrett did not disclose signing the ad, and the one run by St. Joseph County Right to Life, when filling out the Judiciary Committee’s questionnaire, which asks a nominee to list public writings and statements.

Barrett said that in assembling her hundreds of pages of materials for the committee, she had initially forgotten about the ads, saying “30 years of materials are a lot to recollect and remember.” 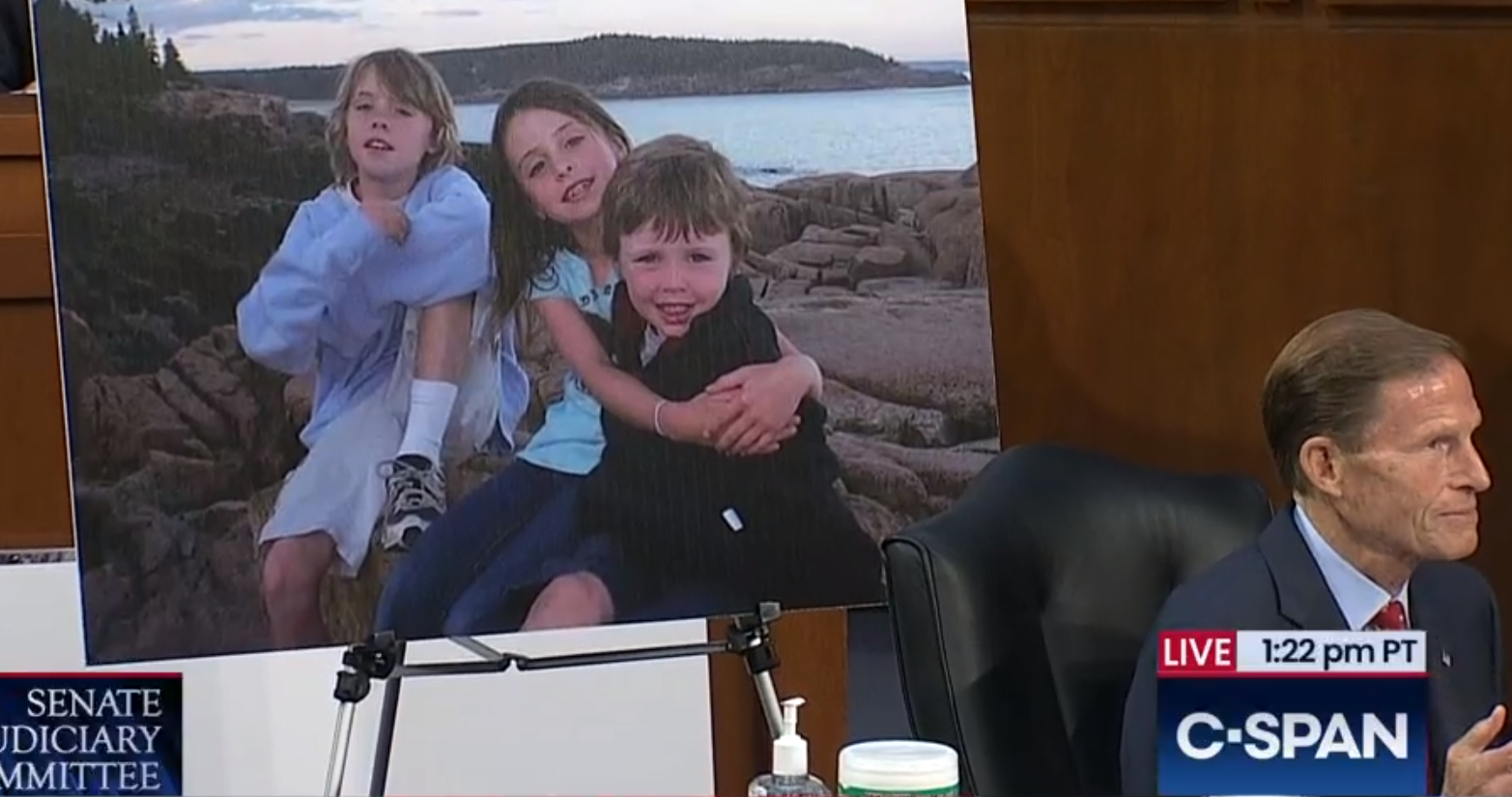 With a huge photo of Sandy Hook shooting victim Daniel Barden and his surviving siblings behind him, Blumenthal also asked the nominee, who sits on the 7th U.S. Circuit Court of Appeals, about her dissent in a case involving a Wisconsin man who pleaded guilty to mail fraud and who challenged a federal and Wisconsin law barring convicted felons from possessing a firearm.

The appeals court rejected his claims, ending the case. But in Barrett’s lengthy dissent, she maintained that historical evidence supports the position that only those “who have demonstrated a proclivity for violence or whose possession of guns would otherwise threaten the public safety” may be legally given a lifetime ban on owning a weapon.

In her dissent in Kanter v Barr, Barrett said her position might “sound kind of radical.”

“It sounds kind of radical because it is radical,” Blumenthal said.

The senator said Connecticut’s gun laws, as well as laws in other states regarding gun ownership, might well be struck down based on “your dissent” because it indicated the courts, not state legislatures or Congress, have final say on who should own a gun.

“Folks who live in Connecticut are terrified at that prospect,” Blumenthal said.

Barrett replied that her dissent in the Kanter case was narrowly tailored and her opinion  would not threaten the types of gun laws Connecticut and other states have approved since the 2012 Sandy Hook Elementary School massacre.

Earlier in the day, Barrett said her family owns a gun and she would fairly judge gun cases.

The Supreme Court has not decided a major case concerning the Second Amendment in 10 years, but the issue could receive attention if Barrett is confirmed, which is expected in the Republican-majority Senate. Barrett would provide a key vote for Justice Clarence Thomas, who has been advocating for the court to take up Second Amendment cases.