The meeting was virtual. The racism all too real. 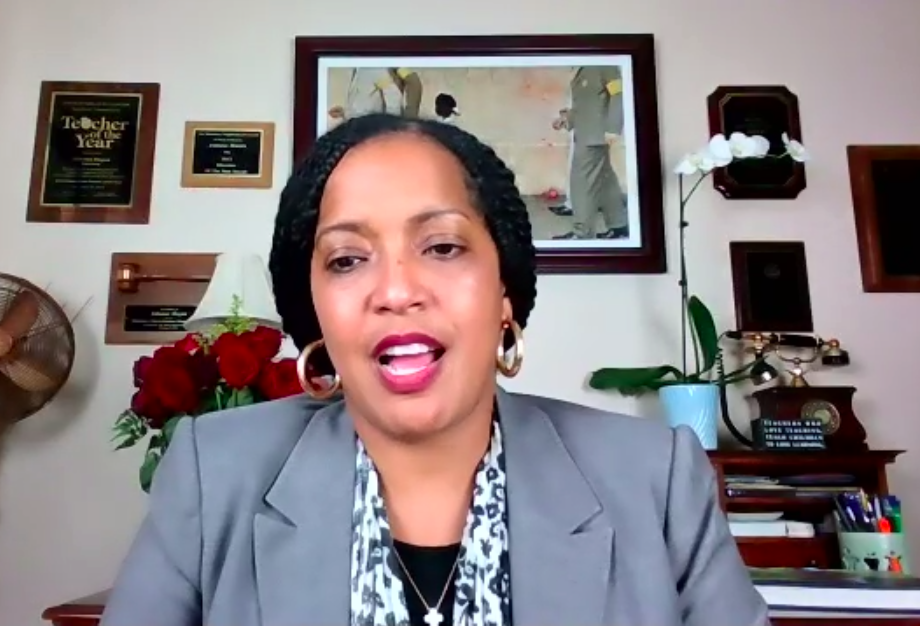 The racist disruption Monday of a virtual community meeting hosted by Connecticut’s first Black congresswoman, Jahana Hayes, bothered Gary Winfield, but it did not surprise him. He is a Black state senator who has been called the N-word on social media.

And the evidence of a coordinated attack against the congresswoman prompted a flash of recognition in Jillian Gilchrest, a liberal white state representative. Her email, Twitter and Instagram addresses were posted last month in an online 4chan forum naming her among the “easy targets for online abuse.”

Hayes and her Zoom audience of 40 voters from Newtown were subjected to six minutes of racist whack-a-mole Monday night at the fourth in a series of nightly meetings before the Nov. 3 election. As soon as the first disrupter was muted, another popped up.

“Only this time it’s the N-word on a loop set to music. This participant is also muted and removed from the meeting,” Hayes wrote in an essay posted Tuesday. “This is repeated by two more people, clearly a coordinated effort.”

Hayes, 47, a Democratic first-term member of Congress seeking re-election, wrote that she smiled and froze as the first man shouted, “Shut up, n-word.”

“Words matter and they cut deep, no matter how hard you try to suppress or ignore them–words hurt,” Hayes wrote. “In that moment I was reminded that I carry the weight of leading by example and knowing that everyone was watching my next step.”

While she wanted to be seen as unfazed, Hayes wrote, that was not the case.

Hayes first publicized the racist incident on Twitter Monday night, saying the hackers repeatedly told her to “go pick your cotton.” They also praised President Donald Trump as “the best president the U.S. has ever had.”

Her campaign emailed her essay to supporters Tuesday along with a fundraising solicitation.

Asked how she was doing Tuesday night in the first of two more Zoom meetings, Hayes smiled and said, “OK.”

It was a small joke.

There was no repeat of Monday’s disruption, one that resonated with other politicians who find themselves relying on Zoom, as well as social media, as they campaign in the midst of a COVID-19 pandemic.

They are both forums vulnerable to hackers and harassment.

“What happened to Jahana Hayes is not in isolation. I had a town hall forum over the summer to talk about racial healing after the killing of George Floyd,” said Sen. Matt Lesser, D-Middletown, who is white.

It was interrupted by someone screaming the N-word, Lesser said.

“It is appalling that a bigoted coward would direct insults at Congresswoman Hayes, interfere and disrupt a legitimate campaign activity, and besmirch the reputation of the good people of the 5th District of Connecticut,” he said in a prepared statement.

Sullivan expressed hope that Zoom would be able to identify the offenders. To get on the Zoom call, participants had to be Zoom members, which required providing an active email account, and registering with Hayes’ office.

On Tuesday night, everyone was muted in two Zoom calls with constituents in Farmington and Danbury. To speak, a caller had to be recognized.

While Hayes dealt with racism, U.S. Rep. Rosa L. DeLauro, D-3rd District, was the target this week of pictures on Facebook and Twitter depicting a statue of Christopher Columbus, one that has already been removed from Wooster Square in New Haven, holding DeLauro’s decapitated head.

“This abhorrent photo depicts the beheading of a public official. That is an incitement to violence, and law enforcement is reviewing it. This act is part of the culture of violence being fostered by President Trump. Witness Michigan and Virginia,” DeLauro said.“These threats and hate in all its forms should be condemned by all, regardless of political party.”

Gilchrest, a state representative from West Hartford, said she is regularly threatened on social media. Four times, she said, she has filed complaints with local police at the urging of State Capitol Police.

The incident with Hayes comes in the final weeks of a bitterly polarized campaign season, one featuring a president, Donald J. Trump, who casually engages in racist tropes about crime and public housing and declined during a debate to denounce white supremacists. He has also frequently disparaged female politicians — particularly women of color — including Joe Biden’s running mate, California Sen. Kamala Harris, whom Trump called a “monster” after last week’s vice presidential debate.

“At best, I think his comments are clumsy,” said Rep. Vincent J. Candelora, R-North Branford, the deputy House GOP leader. “At worst they are offensive.”

“The president and so many other people contributed to that,” Sullivan said. He faulted Joe Biden for saying that any Black voter who supports Trump is not really Black.

J.R. Romano, the Republican state chairman, on Tuesday equated Trump’s comments with “the hyperbole” of Democrats on other issues. Romano said U.S. Sen. Chris Murphy suggested in 2018 that people opposed to Obamacare “want you to die.”

Erick Russell, 31, a Black lawyer from New Haven who is the vice chair of the Democratic State Central Committee, said the racist disruption of Hayes’s call would have generated an immediate bipartisan denunciation in the time before Trump.

“The Republican Party’s silence on this, it doesn’t send a very clear message,” Russell said.

Romano said social media and technology are providing opportunities unavailable in face-to-face communication and campaigning. He called the Hayes incident “beyond the pale.”

“That would never have happened in a real town hall,” he said.

Winfield, a Democratic senator from New Haven, said he has been criticized on Twitter by people echoing the president’s warnings that Democrats are intent on helping the urban poor invade the suburbs. Winfield, they say, is part of the movement.

One woman tweeted a story about a shooting in Stamford, saying this is what Winfield would bring to the suburbs.

Winfield said he is a favorite target because he has played visible roles in the repeal of the death penalty and, more recently, the passage of a police accountability bill. White colleagues get harassed, he said, but it is different for Black lawmakers.

“It is ‘how dare this Black person does this?’ A lot of this stuff gets racialized,” he said.

Winfield said the “Zoom bombing” experienced by Hayes was a different strain of racism than what he has confronted during debates about controversial issues. The racists had no grievance about a specific issue with Hayes, he said.

They simply can’t abide a woman of color sitting in Congress.