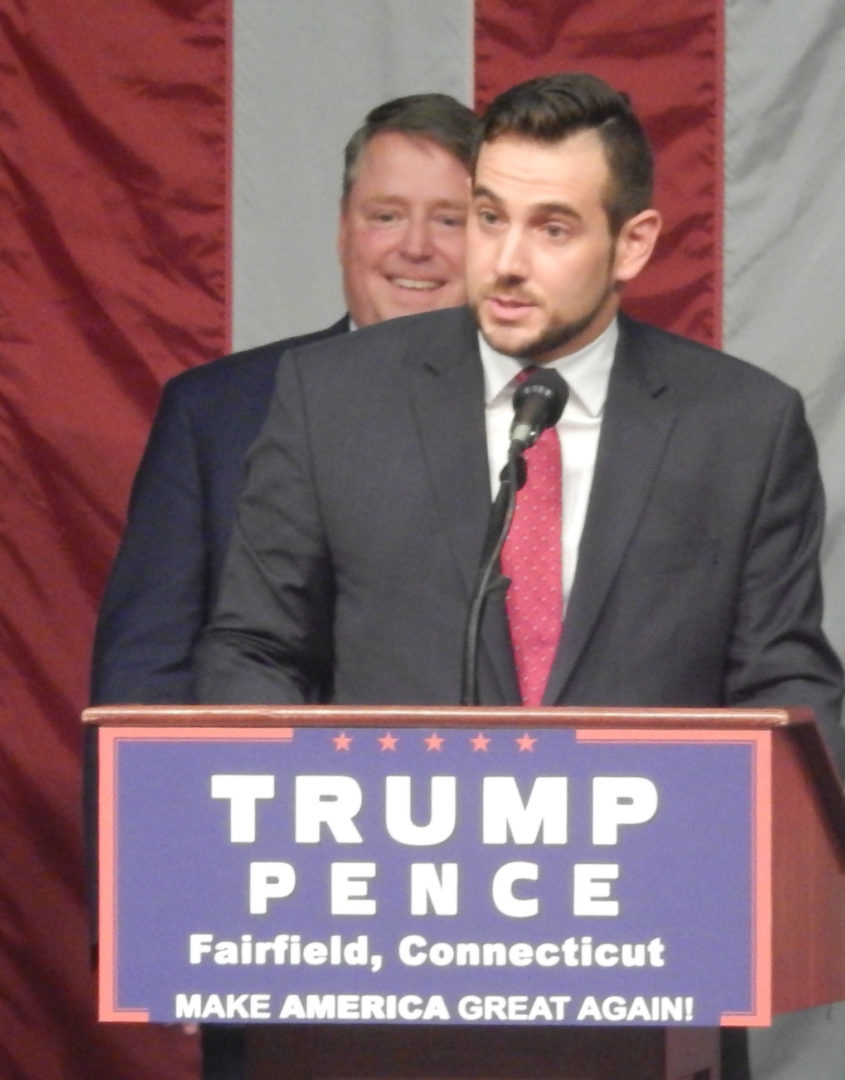 Connecticut Republican Party Chairman J.R. Romano at Donald J. Trump’s presidential rally in Fairfield in 2016. Some Republicans wish he kept the party at a greater distance from the president in 2020.

“Could be worse. Not sure how, but it could be.”

Winnie the Pooh’s gloomy friend instantly came to mind when J.R. Romano tried to explain what lessons Republicans should draw from an election that underscored the second-class status of the GOP in Connecticut.

“For a start, we have to stop behaving like Eeyore,” said Romano, who was elected state chairman of the GOP in 2015, when Donald J. Trump was a reality TV star and the Republican Party was ascendant in state legislative races here. “It’s not the end. All is not lost.”

With a 20-point win, Joe Biden outperformed Hillary Clinton against Trump in all but a handful of Connecticut communities. The previous Democratic presidential nominee to carry the state by 20 points was Barack Obama.

But to the relief of Republicans who had been bracing for a massive blue wave, it turns out that not all 20-point drubbings pack the same down-ballot punch. This one was bad. But it could have been much, much worse.

“I don’t think it was a clear mandate for Democrats to be able to do whatever they want,” said Sen. Kevin Kelly, R-Stratford, the new Senate GOP leader.

Obama’s win in 2008 was a landslide that buried Republicans. Chris Shays’ loss to Jim Himes left New England without a Republican congressman for the first time in 150 years. Losses in the General Assembly were the worst since the post-Watergate drubbing of 1974.

Democrats won majorities of 114-37 in the House and 24-12 in the Senate in 2008, prompting the shrinking state party to declare a trial separation of sorts from a national GOP by swearing off God, guns and gays as social wedge issues.

Instead, the Republicans branded themselves as the party of “common sense,” one focused on fiscal responsibility and economic growth in a state with a shrinking economy and ballooning, underfunded pension debt.

“I think we never really came off that road,” said Rep. Vincent J.Candelora, R-North Branford, the new leader of the House GOP minority.

From the low of election night in 2008, the Republicans steadily gained in the General Assembly without once winning a top-of-the-ticket race. The GOP peaked in 2016 with an 18-18 tie in the Senate and 72 seats in the House, just four shy of a majority.

And then came Trump, the man described by U.S. Sen. Chris Murphy, a Democrat, as the Democratic Party’s best recruiter. The backlash against Trump’s election drew an extra 200,000 voters to polls in the mid-term election of 2018.

Romano, who intends to step down as state chair after his current two-year term expires next spring, said Democrats have done well running against Trump in 2018 and 2020, but he questioned whether they can find another theme after Trump exits the White House.

“At what point do Democrats stop beating the Trump horse?” he said.

Of course, there is hardly a guarantee that Trump will ease his grip on the Republican Party. No one expects a quiet retirement for the president to Mar-A-Lago.

Rep. Themis Klarides, R-Derby, who is stepping down as House GOP leader and leaving the House after declining to seek re-election, expressed frustration with Romano in a Steady Habits podcast interview with John Dankosky. She suggested Romano hewed too closely to the president, while GOP candidates quietly distanced.

For their part, Democrats are trying to assess the realignment evidenced in the past two elections, when Democrats ran stronger in affluent and formerly reliably Republican suburbs of the shoreline, Farmington Valley and Fairfield County.

One impact of Trump is the suburban Democratic women who stepped forward to challenge for Republican seats. Some won in 2018. Others lost, while showing the party they could compete. At least five prevailed this time after losing two years ago.

“They realized they had a pulse in places they hadn’t before,” Liz Kurantowicz, a Republican consultant, said of the Democrats.

The shift is consistent with a national trend of polarization by education and income levels, one that strengthens Democrats in wealthier suburbs and urban centers. The flip side of that gain for Democrats is the loss of some blue-collar suburbs, such as East Haven and Berlin.

“There has been a realignment of the parties, and that realignment has occurred in the span of four to six years,” said Rep. Sean Scanlon, D-Guilford, a beneficiary of that trend. He was unopposed for re-election in the shoreline district.

Democrats can pretend Trump’s appeal was an aberration, or they can address why they are losing ground among blue-collar workers.

Candelora, the House Republican leader, said elements of the House Democratic caucus clearly would like to increase taxes on the wealthy, either to expand services or finance property-tax cuts.

Rep. Matt Ritter, D-Hartford, who is the Democrats’ choice to become speaker of the House when the General Assembly convenes on Jan. 6, said there is nothing new about balancing interests in a diverse caucus.

“We’ve always been a big tent party,” said Ritter, who was the majority leader for the past four years. “I know I have a very diverse caucus. It’s not going to be easy to manage.”

Ritter already has scheduled a series of caucus meetings to sketch out priorities.