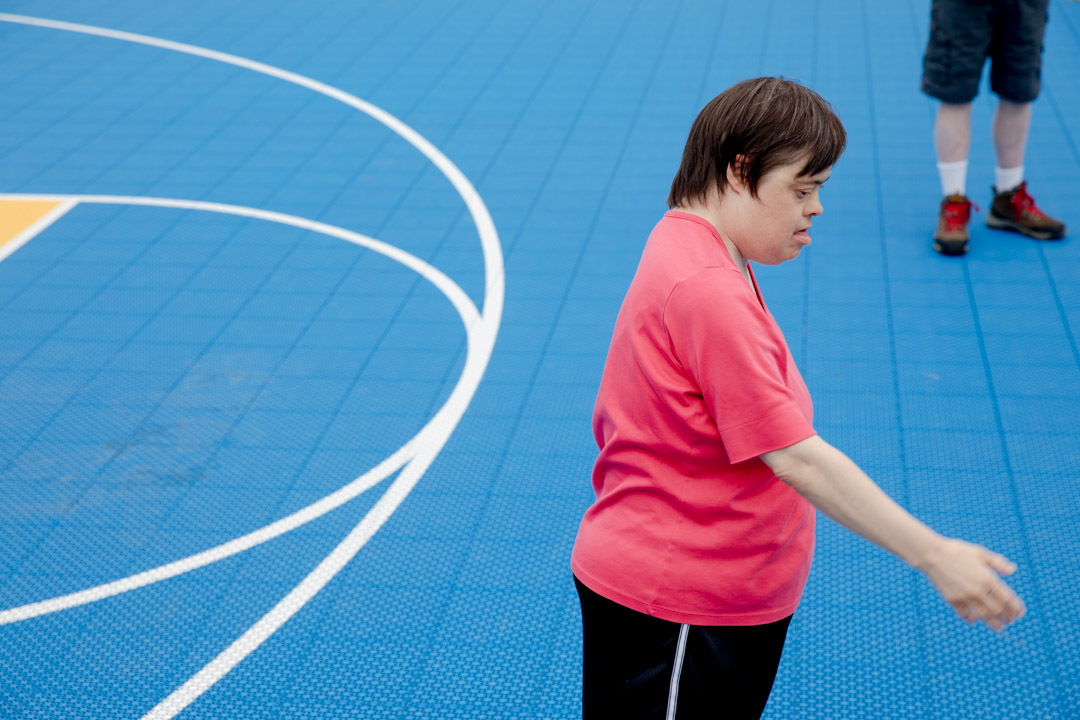 Erin Bradley joins a physical education class at Horizons in South Windham. “We provide respite for families who have children with developmental disabilities,” said Chris McNaboe, CEO founder. “It’s often the only break they get all year long in caring for their loved ones.” Legislative leaders are proposing an increase in funding to social service agencies such as Horizons.

Leaders of the legislature’s budget-writing panel pledged Friday to dramatically bolster Connecticut’s community-based social services and reverse more than a decade of eroding funding for the nonprofits that run these programs.

Sen. Cathy Osten, D-Sprague, and Rep. Toni E. Walker, D-New Haven, said the relief plan likely would be phased in over five or six years, similar to a pitch made last year by the state’s largest nonprofit coalition.

The co-chairwomen of the Appropriations Committee also wouldn’t rule out legally exceeding the state’s statutory spending cap to provide this aid for thousands of disabled and abused children, and people struggling with drug addiction.

This could put them at odds with Gov. Ned Lamont, as well as the legislature’s Republican minority, both of which have strongly opposed exceeding the limit on budget appropriations.

“We can no longer turn our back on these organizations that make us strong and show us who we are as a state,” Walker said during a mid-day press conference streamed online. “They’re the ones who are providing the services that allow our state to thrive.”

Walker was referring to hundreds of nonprofits the state contracts with — at a cost of about $1.4 billion per year — to provide the bulk of Connecticut’s social services.

But over the last two decades, state spending for nonprofits has grown by about 10%. After adjusting for inflation, nonprofits say they have lost money.

An analysis by the CT Community Nonprofit Alliance released 12 months ago estimated the industry needs another $461 million per year just to reverse the losses the sector has sustained over the past 13 years.

Alliance president and CEO Gian-Carl Casa has asked the legislature and Lamont to phase in that additional funding over five years.

And while the Appropriations Committee leaders didn’t commit to a specific amount Friday, they said their goal is to make the industry whole over a reasonable period of time.

While the state has “literally saved millions and millions of dollars” by shrinking its own social services workforce and privatizing the work among nonprofit agencies, it hasn’t always been responsible about properly funding the safety net, Osten said.

“We criticize large commercial organizations that do this,” Osten said, adding that if it’s wrong for major retail stores to offer poor pay and benefits, why should state contractors in the social services field be forced to do so?

Community Solutions, Inc. of Bloomfield, which provides child welfare programs and re-entry services for prison inmates, has had to provide about $800,000 in hazardous duty pay over the past 11 months to keep staff on the job, said CEO Fernando Muniz.

And while the state did assist Community Solutions with face masks and other health protective gear, it covered none of that hazardous duty cost, Muniz added.

“Every day, we are closer and closer to a staffing calamity,” added Chris McNaboe, founder of Horizons, a Windham-based nonprofit that runs a wide array of services for the developmentally disabled. “We’re losing staff faster than we can hire them.”

McNaboe said the problems with state funding date back to the late 1980s, when Connecticut began a steady push to close state-run institutions and privatize social services at the community level.

For example, she added, state funding for her agency grew about 20% percent 1987 and 2001, about one-third the rate of inflation.

But to provide more dollars for nonprofits, the legislature and Lamont will have to overcome several challenges.

Analysts say state finances, unless adjusted, will run more than $2.5 billion in deficit over the next two fiscal years combined.

On paper, Connecticut easily can plug that hole.

The state has more than $3 billion in its emergency budget reserve, and Lamont and legislative leaders have said they’re hopeful President Joe Biden and the newly elected Congress will funnel billions of new stimulus dollars to states in the coming month.

But Connecticut also has a statutory spending cap, and Lamont’s budget office projects that will keep growth in appropriations below 3% next fiscal year and under 2.4% the year after that.

Legislatures can legally exceed the cap with a 60% vote of both the House and Senate.

And while Walker and Osten didn’t commit to going that route, they also wouldn’t rule out lifting the cap amid a health care crisis.

Walker said she’s optimistic the Lamont administration would be flexible on the cap to help those most in need.

“I believe that Governor Lamont is going to take this as a strong issue that needs to be addressed,” she said.

Lamont’s next two-year state budget proposal is expected to be presented to the legislature on Feb. 10. His budget director, Melissa McCaw, said this will be a package “which honors our commitments to our non-profits, through a balanced budget which positions the state for growth and respects the spending cap.”

McCaw added that the Lamont administration has channeled about $125 million in federal pandemic relief to nonprofit social service agencies.

Osten noted that Connecticut routinely exceeded the spending cap to spend surpluses or to expand programs during the late 1990s and the 2000s under Republican Govs. John G. Rowland and M. Jodi Rell.

“I think a good question is,” Casa added, “when is there a better time” to bend cap rules than during a public health crisis?