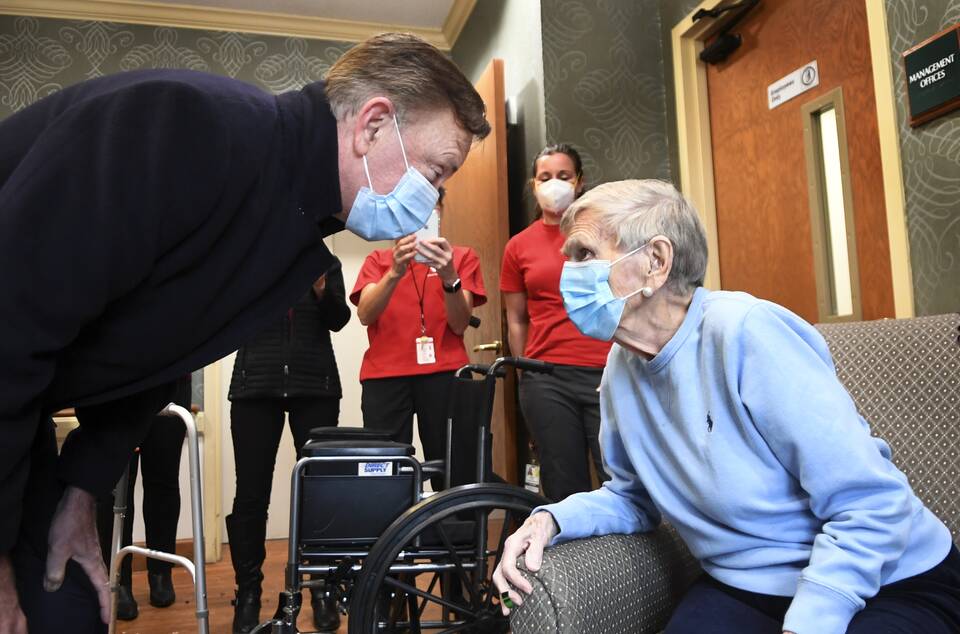 Gov. Ned Lamont, left, talks with Jeanne Peters, 95, a resident at The Reservoir nursing home in West Hartford, as Peters prepares to receive a COVID-19 vaccine.

Gov. Ned Lamont said Monday he will end legal immunity for nursing homes and hospitals beginning March 1, nearly a year after he imposed the order shielding those facilities from civil action.

“In March, April and May, COVID was hitting us hard. We were bringing in a lot of retired folks – retired nurses and others – who were there to help out in the hospitals and nursing homes, trying to keep up with something we were learning about every day,” Lamont said. “At that point, it was unfair, we thought, to hold people legally accountable for a situation that was so fast evolving.”

Legal immunity will continue for individual workers, the governor said, except in cases of gross negligence, but institutions can be sued.

Connecticut officials have not reported overall vaccination numbers from nursing homes, but they believe that as of last week, more than 90% of residents in those facilities had received the shot. About 50% to 60% of the state’s more than 25,000 nursing home employees had been immunized, they said.

At the height of the pandemic, Connecticut was one of at least 20 states that offered the protection to hospitals and nursing homes. But in recent months, advocates and family members have called for an end to the immunity, which prevents patients, their loved ones and other potential plaintiffs from seeking financial recourse in the courts for injury or death, except in cases of “crime, fraud, malice, gross negligence or willful misconduct.”

The legal immunity was first imposed here on April 5, and the order initially ran through Sept. 9. Lamont extended it through Nov. 9, and then again through Feb. 9. One day ahead of that deadline, he announced it would expire on March 1.

Nursing home operators and industry officials were dismayed at the news.

Paul Liistro, who owns nursing homes in Manchester and Vernon, said he was disappointed that Lamont rescinded the immunity while many homes are still dealing with COVID-19 cases and are suffering financially, with occupancies down to about 70%.

“We are now going to see lawsuits blaming nursing home providers for people who die of COVID when nursing homes did nothing wrong,” Liistro said. “This is a virus that attacks the people that we care for more than anyone else. It’s not beneficial to now try and blame someone, because there is no one to blame.”

“This is the worst virus I have seen in my life, and now someone can sue me for malfeasance or claim I had poor infection control, as if that somehow would have stopped it,” he added.

Many smaller providers carry minimum insurance policies that would only cover two or three cases and leave them exposed for any more than that.

“You don’t win when you are sued, you settle — and then your insurance goes up,” Liistro said.

“It never protected us from gross negligence cases,” White said. “There are a lot of unknowns with this virus, and we felt we at least had a level of protection with the immunity, so to have it pulled is very disconcerting. There is so much about this virus that was completely out of our hands.”

In a statement Monday, the Connecticut Hospital Association said it was “extremely disappointed” by Lamont’s decision to end the protection “in the face of the ongoing COVID-19 pandemic.”

“We are reviewing the executive order to fully understand its implications,” the association said. “Hospitals and health systems have responded fearlessly and with unquestioning dedication under uncertain and changing circumstances over the twelve months since this pandemic began. We continue the fight against the pandemic for the good of our communities and our patients.”

The governor’s move ending immunity for nursing homes came shortly after lawmakers introduced a bill that would effectively do the same thing. The measure, authored by Sen. Matthew Lesser, was co-sponsored by 13 other legislators, including Sen. Gary Winfield, a co-chair of the Judiciary Committee.

“I kept on hearing horror stories from  nursing home workers, residents, and family members who were telling me one bad thing after another about corners that were being cut,” Lesser said. “Not every outbreak in a nursing home is attributable to negligence, but there were clearly incidents of negligence. … And that’s something that should not be tolerated.”