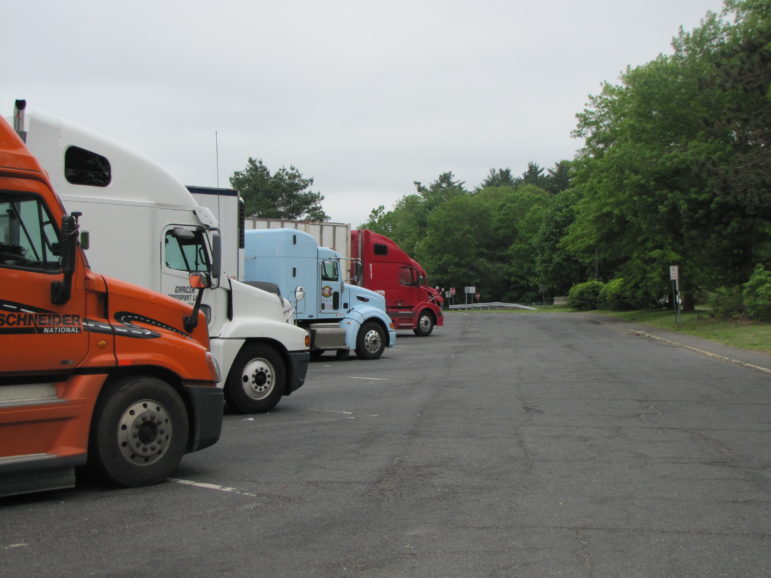 After watching in frustration as lawmakers ignored his tolls proposals the past two years, Gov. Ned Lamont has effectively shelved the question of how Connecticut will finance a long-term rebuild of its transportation infrastructure.

If legislators approve these initiatives, the administration says, the budget’s Special Transportation Fund no longer is headed for insolvency in three or four years, and could be healthy longer than that.

But Lamont’s budget director, Melissa McCaw, stopped short of suggesting those measures are enough by themselves to finance a two- or three-decade-long rebuild of Connecticut’s aging highways, bridges and rail lines.

For years Connecticut has relied chiefly on fuel tax receipts to support the Special Transportation Fund, which pays off the hundreds of millions of dollars the state borrows annually to fix its infrastructure.

“If the thinking had been, ‘If it ain’t broke, don’t fix it,’ then that thinking needs to change,” Lamont said during his budget address Wednesday, referring to the program’s flirtation with insolvency over the past seven years.

Although he is optimistic President Joe Biden’s new administration will significantly increase federal funding for transportation, Connecticut must have its own resources and be ready to move when Washington does, Lamont said.

The governor’s new plan includes nothing like the statewide tolling plan, which involved both cars and trucks, he pitched in 2019 with the goal of generating more than $600 million per year in new revenue.

Instead, his latest budget would create a highway usage fee on large trucks that is based on the vehicle’s size and miles traveled. It would target trucks in class sizes 6 through 13, charging between 2 and 10 cents per mile in most cases, but up to 17.5 cents in others, McCaw said.

The program would generate about $90 million per year, the administration estimates.

But the Motor Transport Association of Connecticut, the state’s largest coalition of trucking businesses, called the plan “discriminatory” and predicted it would be a financial flop.

“It is disheartening, but not surprising, that Governor Lamont has chosen to once again target the trucking industry to try to cover up the fiscal woes of the transportation fund,” MTAC executive director Joseph Sculley, who also opposed tolls, said of the latest plan. “The workers in an industry that he himself declared “essential” have been among the heroes of the COVID-19 pandemic, bringing vaccines, medications, hospital equipment, and groceries to locations all across the state.”

Sculley added that this burden largely will be paid by in-state businesses while many trucks from other regions will take new routes and avoid Connecticut altogether.

“Rather than targeting the industry, the Governor should simply thank truckers for their role in surviving the pandemic, and leave us alone,” he added.

Lamont isn’t only targeting large trucks, which he says do the “vast majority” of damage to state highways.

The governor also is counting on savings from Connecticut’s decision to join neighboring Massachusetts and Rhode Island in the regional Transportation Climate Initiative.

The program would raise taxes on fuel producers — which would be passed onto motorists at the pump — adding about 5 to 9 cents per gallon by 2023.

The administration estimates this would generate about $80 million per year. And while much of the revenue raised by those increases would be used by states to invest in public transit, electric cars and other conservation methods, that could free up other dollars in the Special Transportation Fund to support the capital program, McCaw said.

According to Lamont’s budget office, the fund currently is headed for insolvency by 2024 or 2025. But with these two initiatives, the fund would continue running a positive balance at least through 2026.

More importantly, McCaw said, if additional federal dollars are channeled to states for transportation, Connecticut could be in a very different situation. But whether that would be enough to eliminate the need for tolls or major gasoline tax hikes over the long haul remains unclear.

Don Shubert, president of the Connecticut Construction Industry Association, was cautious Wednesday about the governor’s proposal, saying legislators need to dig deeply into the numbers.

And while additional federal aid may be forthcoming, he said, legislators here need to iron out a vision for the future now, and not in 2022 or 2023, he said.

“You’re going to have to rebuild the industry’s confidence that there’s going to be long-term, stable, dependable funding in Connecticut,” Shubert said, adding that many construction firms and workers already are finding work on transportation projects in neighboring states. “It’s been two decades [that] we’ve been hanging on by our fingernails” he added.