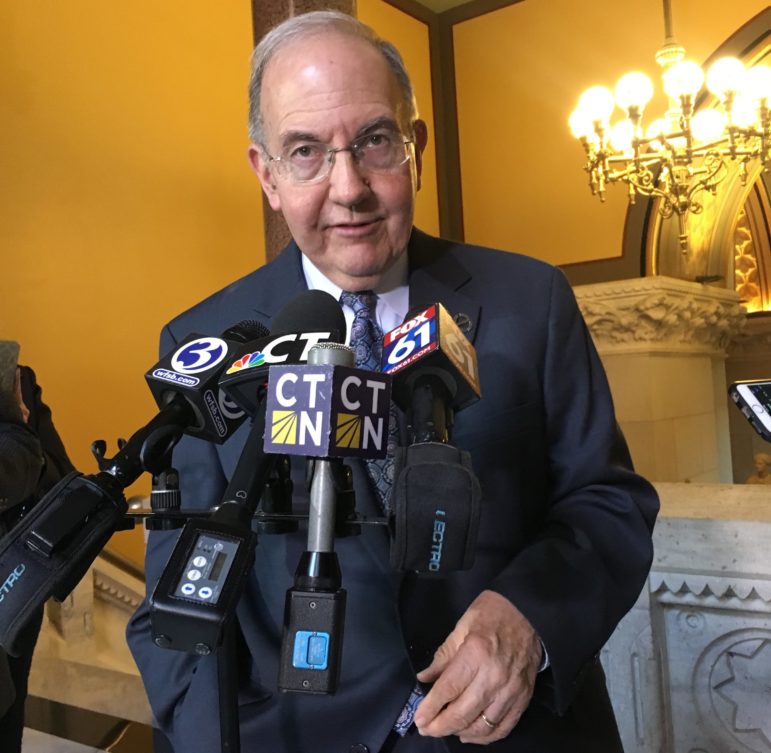 The House of Representatives is expected to approve an omnibus bill Wednesday that commits more than $100 million in new aid to municipalities, shields thousands of residents with out-of-state employers from double taxation, and ends the controversial practice of placing liens on the homes of former welfare recipients.

Legislative leaders also were considering a proposal from Gov. Ned Lamont’s administration to offer sales tax incentives to promote development of data centers, but it was unclear late Tuesday whether that bill would proceed Wednesday. If the bill does advance in the House, tentative plans call for the Senate to consider it Thursday.

The linchpin of the House agenda, though, involves a proposal from Senate President Pro Tem Martin M. Looney, D-New Haven, to overhaul two non-education grants that offset a portion of the revenue communities lose because state property, colleges and hospitals are exempt from local taxation.

What’s particularly unusual about this bill is that municipal aid — or any large component of the state budget — normally isn’t resolved until the session is nearly at its close in May.

“I think the intent of tomorrow is to put a marker in the budget,” Rep. Sean Scanlon, D-Guilford, co-chair of the Finance, Revenue and Bonding Committee, said Tuesday. “We are making a very strong statement to say we’re going to figure this out.”

What’s to figure out?

For one thing, Gov. Ned Lamont didn’t include any increases in PILOT (Payment in Lieu of Taxes) funds in the $46 billion, two-year budget he proposed to legislators on Feb. 10. Instead, he proposed combining $50 million in state borrowing with $50 million in unused federal pandemic relief funds to bolster non-education aid to municipalities, but only for the 2021-22 fiscal year.

Still, the Democratic governor said last month he was “intrigued” by Looney’s proposal to boost PILOT, which is particularly crucial for poor cities, which tend to have higher mill rates and a greater share of tax-exempt property than smaller municipalities.

And then there’s the statutory spending cap.

Lamont, who’s unwilling to exceed the cap legally, proposed a plan that falls $103 million below that limit next fiscal year, and $115 million below in 2022-23.

Legislators still were negotiating final details of the House bill late Tuesday, but Scanlon said the PILOT program would involve close to $110 million per year in new funds for municipalities.

That proposal, if combined with Lamont’s budget, would push the plan over the cap in the first year and dangerously close in the second. And some Democratic legislators also want to add back more spending for education, health care and other priorities.

But Scanlon said lawmakers are committed to working everything out.

PILOT grant has a shaky history

Joe DeLong, executive director of the Connecticut Conference of Municipalities, said cities and towns, which have seen their finances rocked by the coronavirus pandemic and related economic chaos, would be grateful for the aid.

But DeLong also said state officials need to look at Connecticut’s finances and ensure they can provide this relief for many years to come.

“Our hope is that it’s not just very real this year, but that it’s sustainable,” he said. “There has to be a commitment here.”

“If we make a promise,” she said, “we should also figure out a way to keep it.”

Legislatures and governors have struggled to maintain their commitment to PILOT over the past two decades as surging pension and other debt costs consume more and more of the state budget.

For example, PILOT grants are supposed to replace about 45% of the funds communities lose because they can’t tax state property. Communities currently get less than 15% back, according to CCM.

Similarly, the grants once designed to replace 77% of taxes lost on nonprofit colleges and hospitals now cover less than 25%.

No community would receive less PILOT aid than it currently does through the bill under consideration, but those in low-income municipalities would receive additional funds.

The bill scheduled to go to the House also includes at least two other budget-related components.

One would clarify that Connecticut residents who work in other states and pay income taxes to those jurisdictions still can get a credit for those taxes on their Connecticut returns.

New York and Massachusetts enacted laws holding that telecommuters working from home for “convenience” actually owed taxes first to their employers’ home state. Connecticut responded with its own convenience law in 2019, and those and other northeastern states are battling the issue out in federal court.

But legislative leaders from both parties said recently a clarifying measure was necessary to ensure — until the legal fight is over — that Connecticut residents don’t feel pressured to pay income taxes to two states at once.

A third component of Wednesday’s House bill would end Connecticut’s longstanding practice of placing liens on the homes of recipients of cash assistance offered through welfare.

Critics say this process pre-dates the welfare reforms Connecticut and many other states enacted in the 1990s, when new rules were established to limit fraud and to require recipients with addiction problems to seek assistance.

Connecticut’s statute is an outdated, unnecessary measure that stops many of those it’s trying to help from building wealth, according to House Speaker Matt Ritter, D-Hartford, and Rep. Toni E. Walker, D-New Haven, who spearheaded the repeal effort.

Legislative leaders still hadn’t decided late Tuesday whether to include a fourth fiscal component to the bill scheduled to go before the House on Wednesday.

The Lamont administration is seeking to waive sales taxes for up to 30 years on data centers that invest at least $400 million in a facility in Connecticut — or at least $200 million if the facility is located in an “enterprise zone” where the state is trying to encourage development.