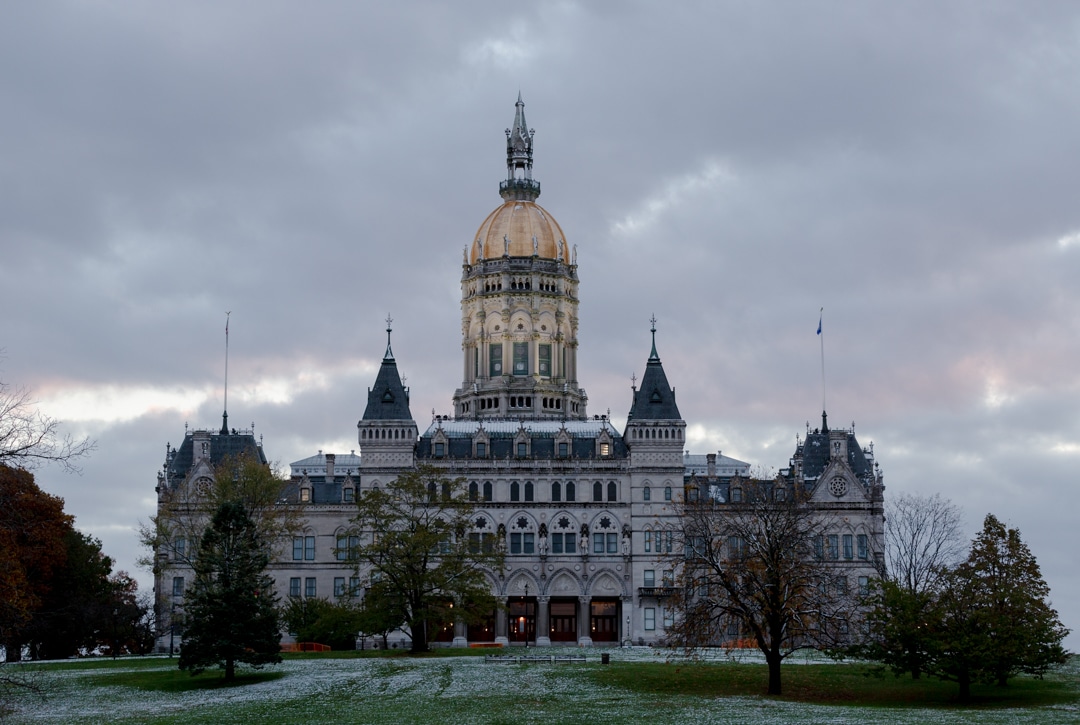 The state Capitol on a snowy day on Oct. 30, 2020 in Hartford. The latest federal pandemic relief act is expected to send $4.2 billion to Connecticut state government, its municipalities and regional groups.

Hundreds of residents testified in favor of a progressive plan to finance tax cuts for the poor and key investments in education and health care with billions in tax hikes on wealthy households and corporations.

And while a tax redistribution plan of that scale faces a seemingly insurmountable roadblock in Gov. Ned Lamont, progressives remain hopeful 2021 will be a landmark year for their cause.

“People are frantic,” said Rep. Anne Hughes, D-Easton, one of 34 lawmakers who’ve endorsed the most sweeping tax overhaul measure. “There are people that are losing their jobs, that are losing their health care. There are people who can’t go to jobs and don’t have child care. This is saying, ‘We see you. We hear you. We recognize your suffering.’”

Hughes and her fellow “recovery champions” co-sponsored two identical bills — one slated to run in the House and one in the Senate, provided either makes it out of the Finance, Revenue and Bonding Committee.

The measures would double state income-tax credits that currently send more than $160 million annually to the working poor and to low- and middle-income households with property tax liabilities.

Another provision calls for one-time, $500 payments to all residents who were on unemployment between mid-March and Dec. 31 last year.

To help finance this relief, the coalition has proposed numerous proposals to generate a collective $4 billion-plus from Connecticut’s wealthiest households and from corporations, including:

Besides financing tax relief for poor and middle-income households, these proposals also would enable legislators to make huge new investments in education, health care, affordable housing, economic development and other priorities necessary to lift Connecticut out of the coronavirus pandemic, progressives argued Monday during a public hearing held by the Finance, Revenue and Bonding Committee.

Congress is expected to send $4.2 billion to Connecticut, its municipalities and regional organizations in this latest round of aid, including more than $2.6 billion for state government.

“Those dollars are temporary and will disappear,” he said. “They won’t enable us to make the long-term investments in our communities and our people that will address decades of race and class inequity.”

One year of the pandemic has left Connecticut in the midst of a “she-session,” testified Madeline Granato, policy director for the Connecticut Women’s Education and Legal Fund.

“Women, specifically women of color, are over-represented in low-wage jobs that are underpaid and inadequately protected on the front lines of the pandemic, as well as in industries that continue to shed its workforce,” Granato said.

She added that while women make up 49% of Connecticut’s workforce,  they are 78% of health care workers, 67% of the education workforce and 56% of employees in accommodation and food service industries.

Labor: Investing in services is key

Researchers with Yale University and In the Public Interest, an Oakland, Calif.-based policy group specializing in public services, warned legislators not to underestimate the damage Connecticut has done to public services since the last recession ended in 2009.

Lack of state investment in these areas only exacerbated long-standing extremes of income and wealth inequality in Connecticut already locked in place through a state and municipal tax system that leans heaviest on low- and middle-income families, wrote Yale History Professor Jennifer Klein and Shahrzad Habibi, research and policy director for In the Public Interest.

Studies by the Center for American Progress and the Center on Budget and Policy Priorities noted that states which invested in public services and health care generally recovered more quickly than others did during the last recession.

Connecticut, which suffered a recovery that lagged nearly all other states, took advantage of the federal Affordable Care Act to expand its Medicaid program — largely using federal dollars. But the state also dramatically cut its workforce, shrinking Executive Branch agency staffing about 10% during the last decade.

Analysts warn state finances, unless adjusted, would run about $1.7 billion in deficit in each of the next two fiscal years. Much of that federal money likely will be used simply to plug those budget holes.

Connecticut does have about $3 billion in its rainy day fund it also can tap.

But then there’s the last-minute language added to the relief measure by the U.S. Senate precludes states from using the revenue to finance tax cuts.

All states will almost certainly build the federal funds into their respective budgets. But if any state wants to cut taxes, how does it demonstrate that money from Washington went to bolster spending and wasn’t funneled as relief back to local taxpayers?

The Tax Foundation, a Washington, D.C.-based fiscal think-tank, says most states are grappling with that question.

And Lamont, who already has said he doesn’t want to raise state taxes on the wealthy to finance tax relief for other groups, said he’s also unsure whether the federal funding will put all tax-cutting proposals on hold for a while.

Democrats, who hold majorities in the state House and Senate, also can expect some opposition from Republicans if they want to raise taxes on most groups.

“Until we fix what’s really wrong with the system, [tax increases]are a non-starter for me,” she said.

Lamont’s proposal for the next two-year state budget recommended suspending a plan to increase Education Cost Sharing grants for local school districts by $30 million next fiscal year, and by $60 million in 2022-23.

House Speaker Matt Ritter, D-Hartford, said he expects to restore those funds, and to adopt a plan to bolster non-education PILOT [Payment In Lieu Of Taxes] grants to communities with large amounts of tax-exempt property. These measures would help cities and towns to keep local property taxes down.

“I think there is broad-based interest” in making Connecticut’s state and local tax system more progressive, added Senate President Pro Tem Martin M. Looney, D-Nw Haven.  “I think all of these ideas are an indication that there is some momentum, that the time is now.”

“I think there is broad-based interest” in making Connecticut’s state and local tax system more progressive, said Senate President Pro Tem Martin M. Looney, D-New Haven. “I think all of these ideas are an indication that there is some momentum, that the time is now.”