Gov. Ned Lamont plans to extend the state’s eviction moratorium until the public health emergency expires on May 20.

The moratorium was set to expire at midnight, but a spokesman for the governor said Lamont intends to keep it in place as long as there is a public health emergency.

“It is extended to whenever the emergency ends,” said Max Reiss. “It remains an important tool to keep Connecticut families in their homes during unprecedented circumstances.”

It is not known at this point whether the governor will extend the moratorium past May 20 or, if he does allow it to expire, whether the legislature will act to extend protections against evictions. The Centers for Disease Control and Prevention issued a separate, national eviction moratorium that extends through June 30. The CDC moratorium also provides some protections from eviction, though court rulings across the country threaten to end that order at any time.

The state moratorium hasn’t completely eliminated evictions, which are now at about half the level they were before the pandemic. That’s because there are built-in exceptions that allow landlords to evicts tenants if they are at least six months behind on rent or if the landlord wants to use the rental unit as their own primary residence. Housing advocates worry that as the economic fallout of the pandemic persists — and disproportionately impacts lower-income residents — more people will reach the six-month threshold and face eviction.

“While this is important and will help some people, the number of exceptions to the moratorium make it likely that many people of color will continue to lose their homes,” said Erin Kemple, executive director of Connecticut Fair Housing Center.

Evictions often lead to people moving into the home of a friend or relative or becoming homeless, making it difficult to follow public health experts’ pleas to physically distance and quarantine if exposed to or diagnosed with COVID-19. Those being impacted the most by evictions are Black and Hispanic residents, the same population that is more likely to contract and die from the virus.

Latino residents are three times as likely to face eviction as white residents, according to a CT Mirror analysis of eviction records that could be matched to census tracts. In Bridgeport, for example, 778 residents have faced eviction, compared to 58 next door in Fairfield and 30 in Westport, court data tracked daily by Fair Housing show. That means renters in Bridgeport are being evicted at almost twice the rate as renters in Fairfield and Westport, a CT Mirror analysis shows.

Landlords are not happy with the governor extending the eviction moratorium.

“Dear God, when is it going to end,” said John Souza, the leader of the Connecticut Property Owners Association. “At this point, they’re only protecting the bad people… This is purely political, there’s no other reason. Our economy is mostly open. Is there anything that’s not open anymore to some degree, everything’s open? … It’s not like you can’t find an apartment or a job.”

While unemployment rates for Connecticut workers who were making more than $60,000 a year before the pandemic have almost entirely rebounded, employment among those who were making low-wages was still down 28% through the first week of February.

Help on the way?

An influx of federal aid for rental assistance — $424 million — aims to help clear the backlog of missed rental payments before the moratoriums expire.

The state launched UniteCT on March 15 to distribute this rental assistance, sending an RV and staff around the state to help people fill out applications for aid. 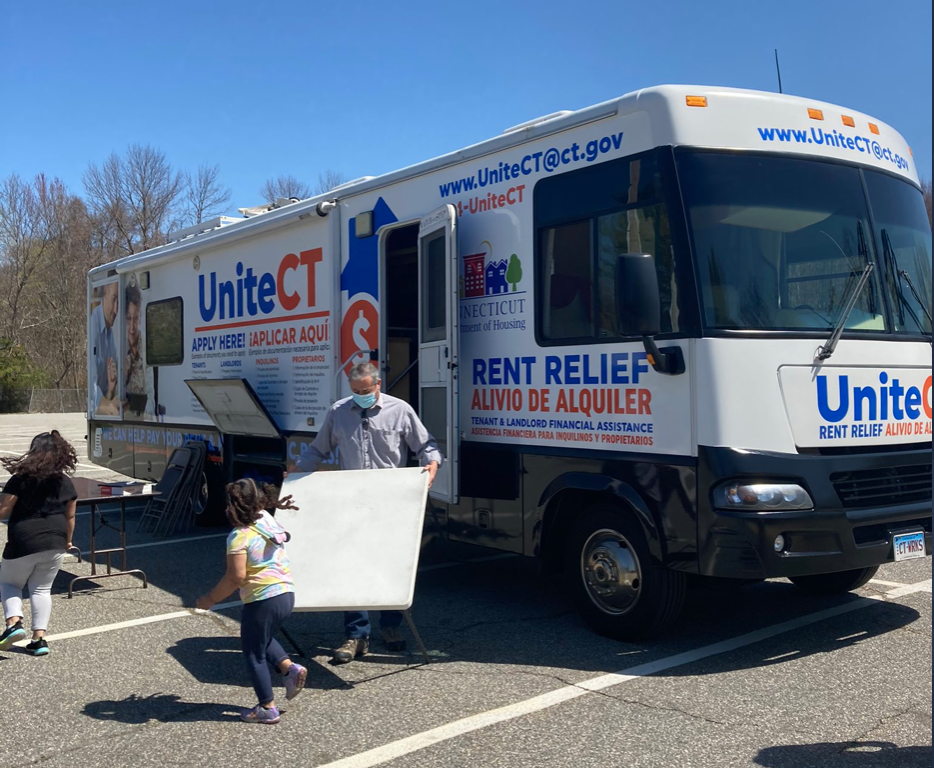 Connecticut’s rental assistance program — UniteCT — includes an RV traveling around the state to help people fill out applications for aid.

In the first five weeks of the program, about 14,000 people began filling out an application, of which 102 have been processed and approved for payment as of Monday. About 100 people are applying each day. There are currently 1,900 completed applications under review, and another 5,400 are being pre-screened. A state advisory board was told last week that it is taking more than 30 days for each completed application to be processed.

Kemple, of the Fair Housing Center, characterized the number of people who have received rental assistance 14 months into the pandemic and the rollout of UniteCT as lackluster and overly burdensome. She said the online application system is not user friendly, doesn’t translate into several languages, and the state is requiring much more paperwork than the federal government actually requires. She added the agency has sent mixed messages about whether those living in public housing or receiving Section 8 vouchers qualify.

Woodbridge officials are weighing whether to allow multi-family housing after attorneys applied to convert a single-family home.