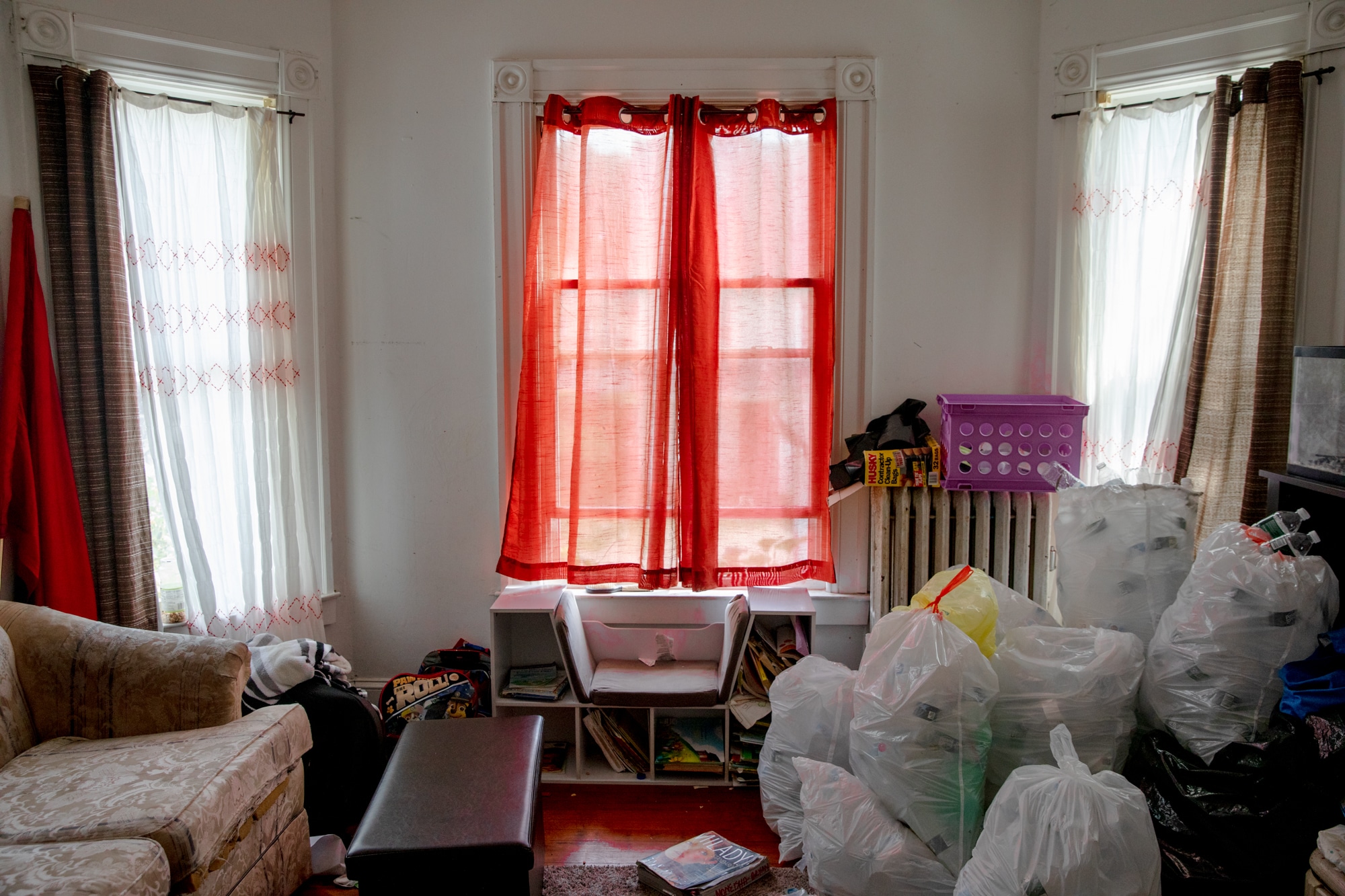 Parenting alone during COVID
‘When a storm comes, you just get blown over.’

Bryan got rid of most of her furniture to move to Florida. Bags of plastic bottles that she collected to return for money sit in the living room.  |   photo by: Yehyun Kim :: ctmirror.org

Moneisha Bryan barely left her bed last September. She wasn’t sleeping much, though. She was simply too depressed to get up.

As a 24-year-old single mom raising three young boys – ages 4, 5 and 7 – in a pandemic, she was consumed with worry about her finances.

“What’s wrong with me? I feel crazy. It’s not cool to be depressed,” Bryan reports thinking then. “All you do is feed the kids.”

Her Manchester home was already emptied out. Afraid of weathering a COVID winter alone in Connecticut, Bryan gave away all her furniture in anticipation of a move to Florida. She thought she could give her kids a better life in the south, where she could save money on rent and wouldn’t have to worry about winter utility bills. 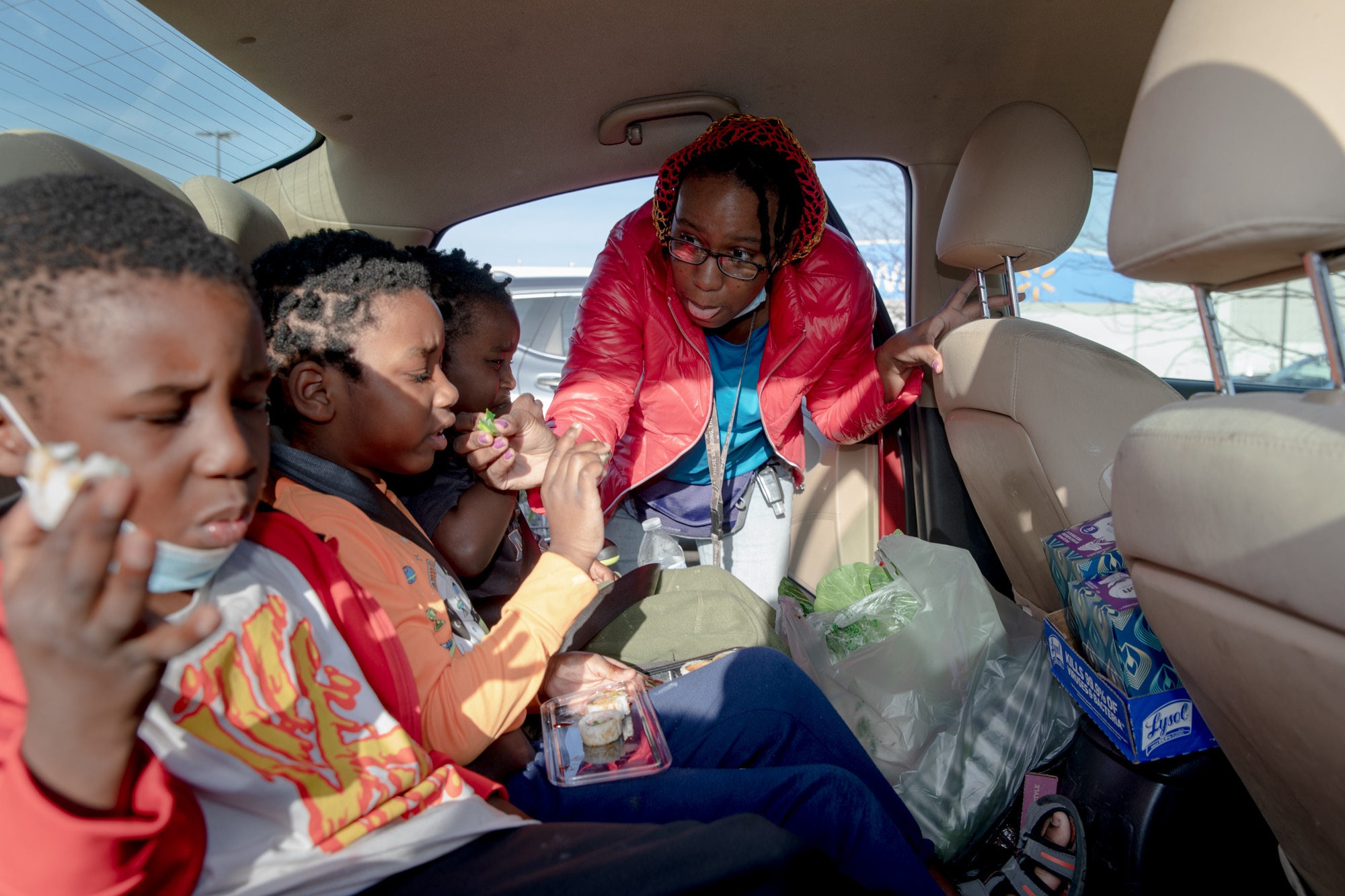 Bryan didn’t go through with the plan – her father helped pay the rent at the last minute and some neighbors who were moving gave her furniture to replace what she’d already given away.

[Life has never ben easy for single moms. The pandemic made it harder.]

Although she’d already started a three-month leave from her work as a pharmacy technician — planning to transfer to a branch in Florida after it ended — she stayed with those plans because her children were only attending school part-time in Connecticut, requiring her to be at home. 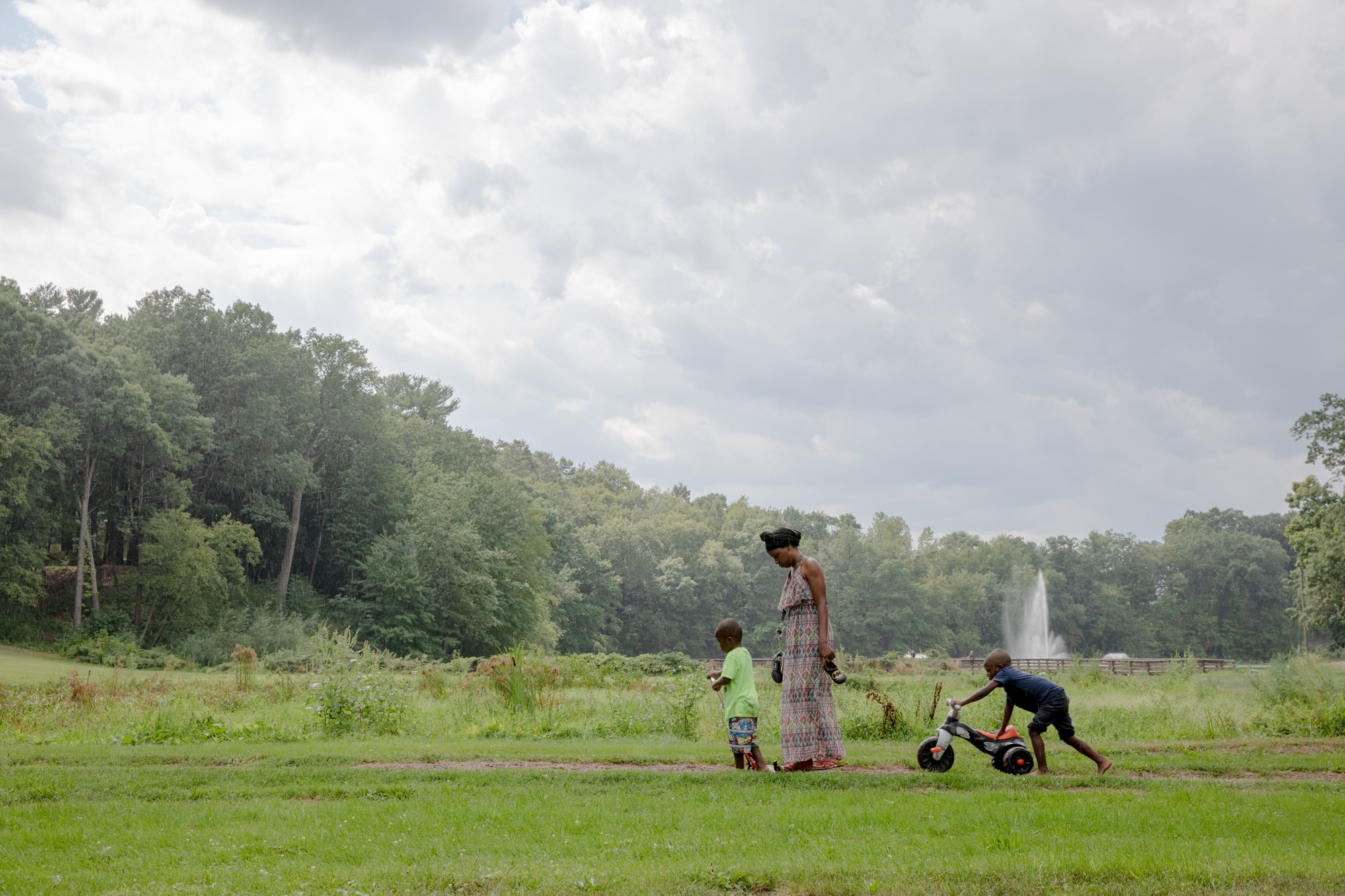 From left, Myron Hodges Jr., Moneisha Bryan, and Kayden Hodges head home after hanging out at a park in Manchester last summer. Visiting parks is a big part of their family life, partially because they can have fun for free. 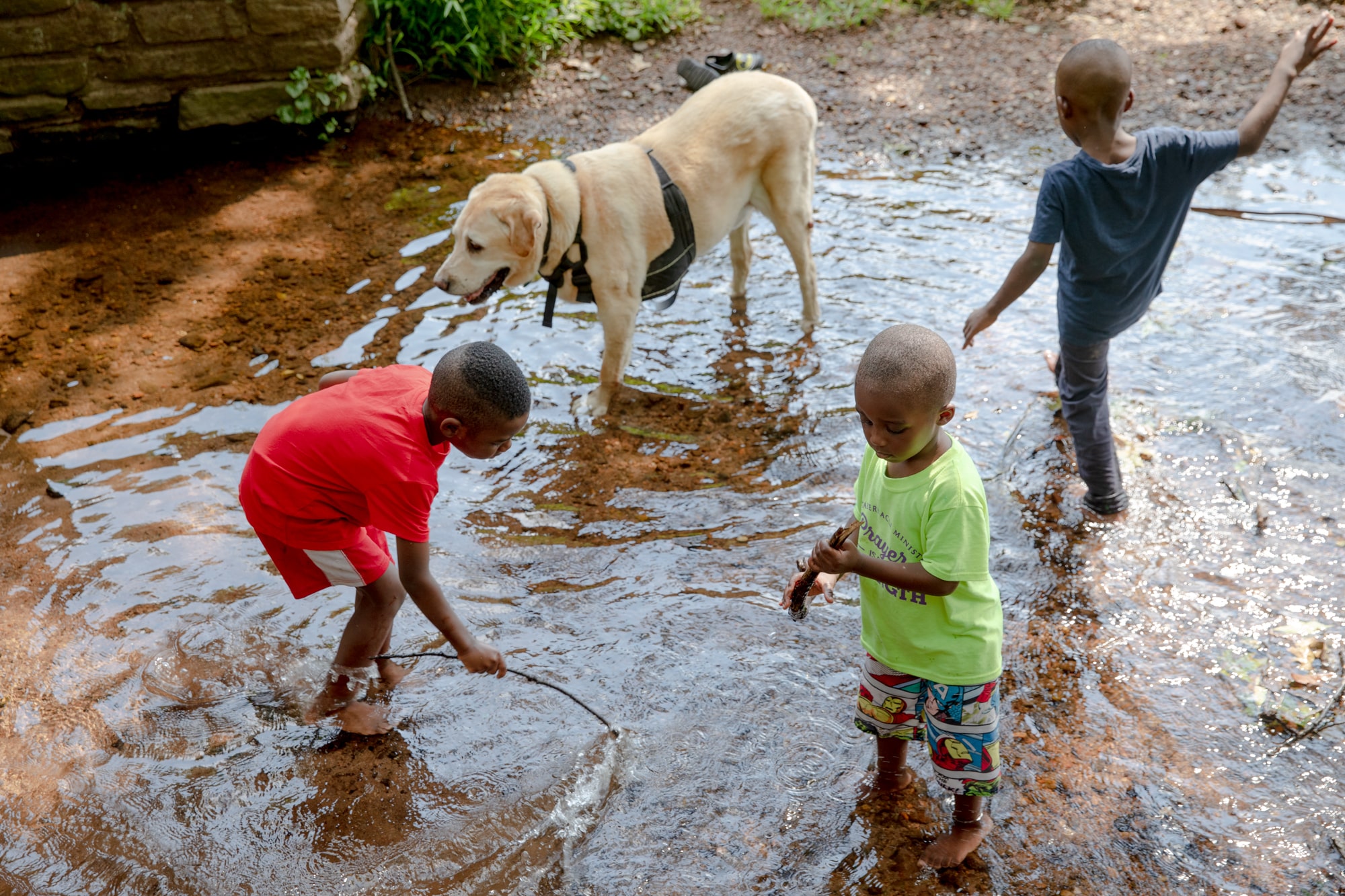 Warmer weather in Florida was one of the reasons why Bryan planned to move to the south. “I just think it would be good for the me and my boys because we’re always outside,” Bryan said. “In the summer time, we’re everywhere, at every park.” 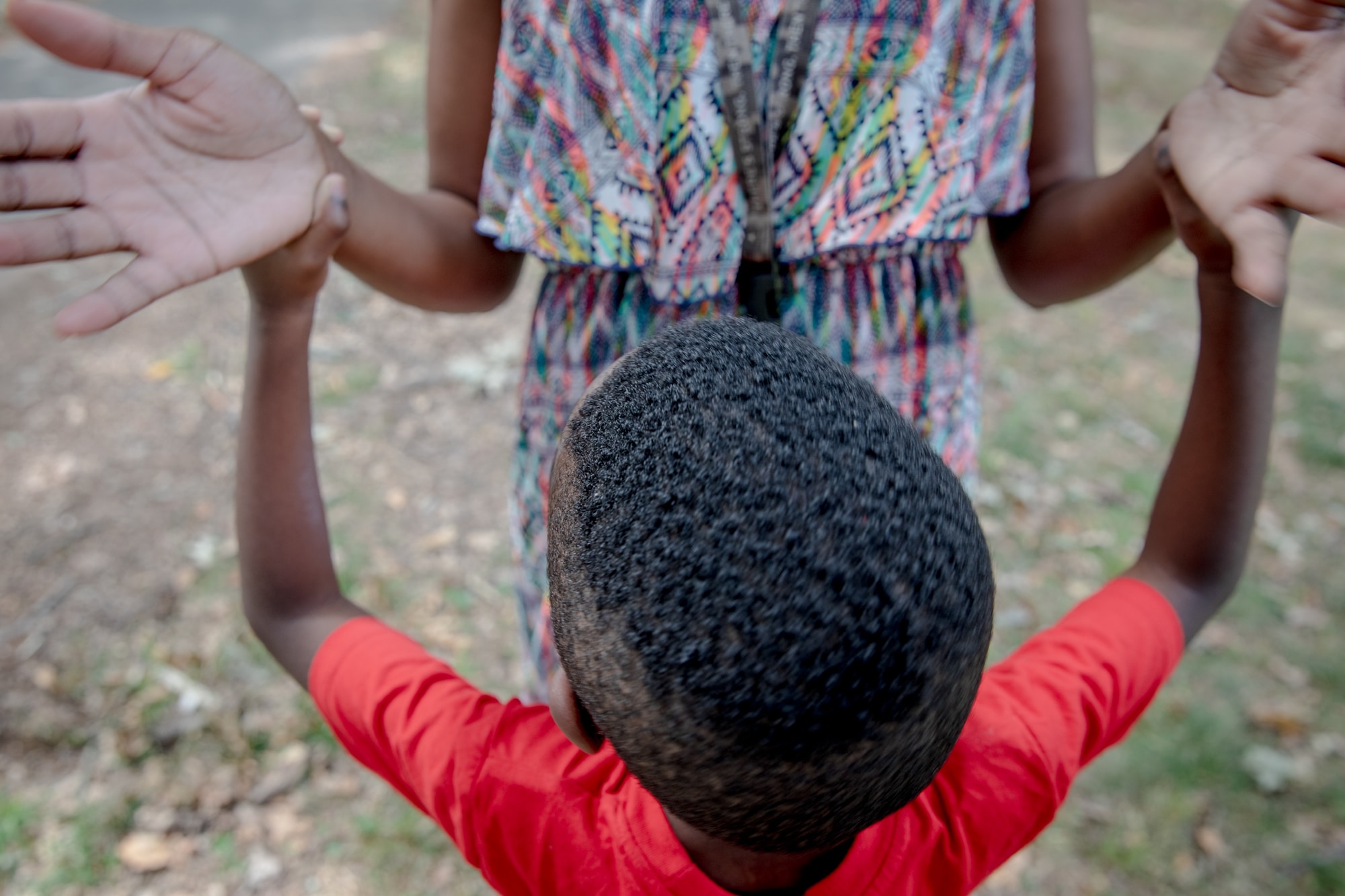 Aaron Hodges holds his mom’s wrists in August, 2020. Bryan reduced her working hours by almost half last summer to educate and spend time with her children. “My kids were happy,” Bryan said.

It was the second time Bryan would be required to take an extended break from work to care for her children — Aaron Hodges, 7, Kayden Hodges, 5, and Myron Hodges Jr., 4.  In March 2020, Bryan learned that her sons’ kindergarten, preschool and daycare center were all temporarily closing due to what was then an unfamiliar threat: COVID-19.

“That is like a feeling of getting hit by a truck,” Bryan said of losing all her child care support. She couldn’t go to work with young kids at home.

[‘Are we just going back to women bearing the brunt of all this?’]

What Bryan thought would be two weeks of unpaid leave ended up lasting for two months because she had COVID-like symptoms with dry cough and fever (she never got tested). Even after her kids began to attend a reopened daycare center part of each day, Bryan reduced her working hours by almost half from what they were pre-pandemic to help her sons with their online learning.

“Your brain is a muscle,” Bryan said. “If I allow them to miss school and let their brains become stagnant, that’s going to be the worst for them.” 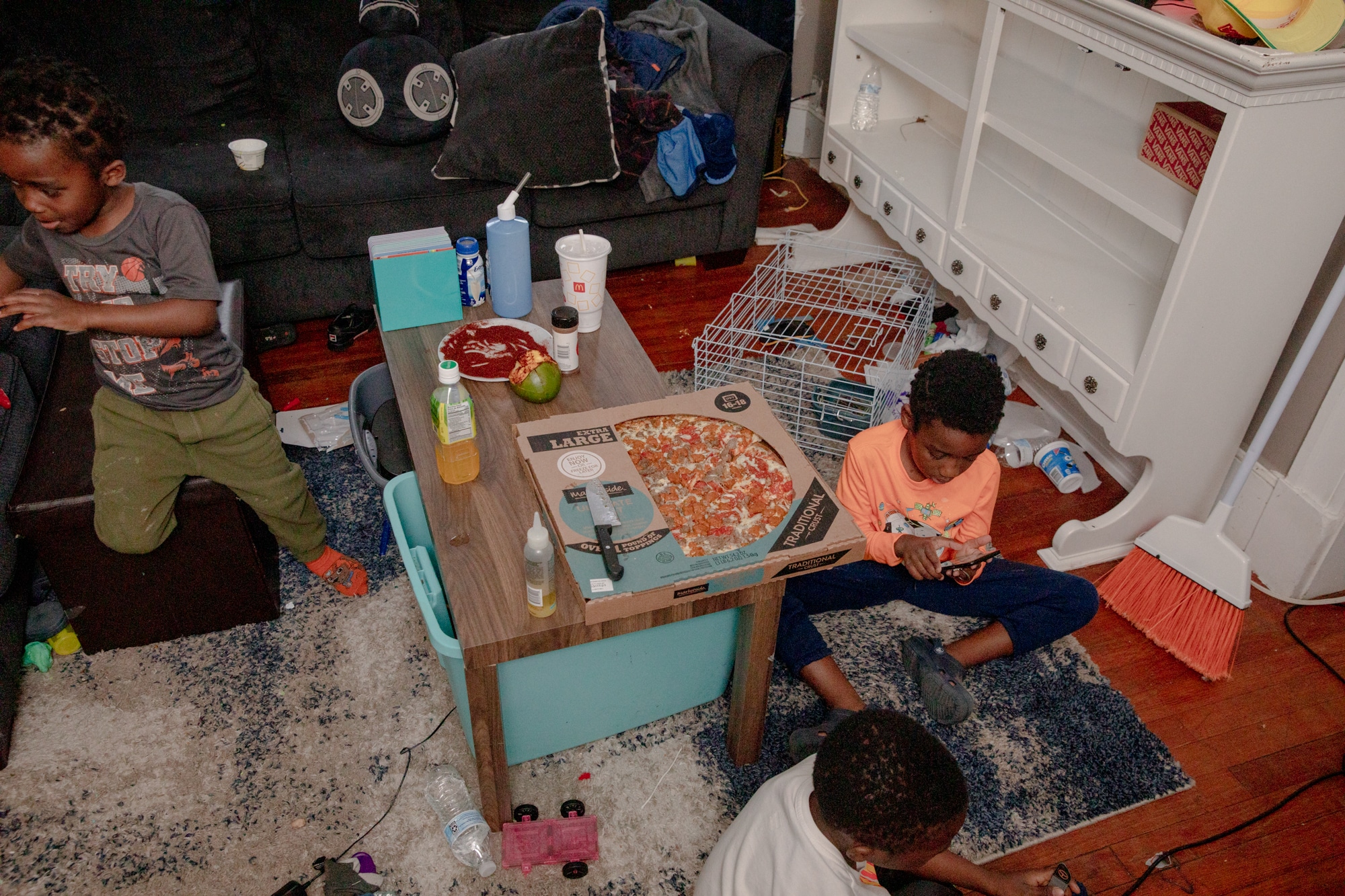 Bryan’s three sons at home. Bryan said the pandemic has taught her to accept her situation and focus on being happy, instead of obsessing about keeping her house clean all the time.

Even when her leave of absence ended, Bryan couldn’t work more than once a week, the day her mother was off from work and could take care of her children. Her kids were on winter break and, with such drastically reduced income, she couldn’t afford to hire someone to watch them.

[Getting by with the ‘grace of god and caffeine’]

“For a person like a single mother who’s already struggling financially, there’s no roots,” Bryan said. “When a storm comes, you just get blown over. Everything you worked to build up is demolished again.” 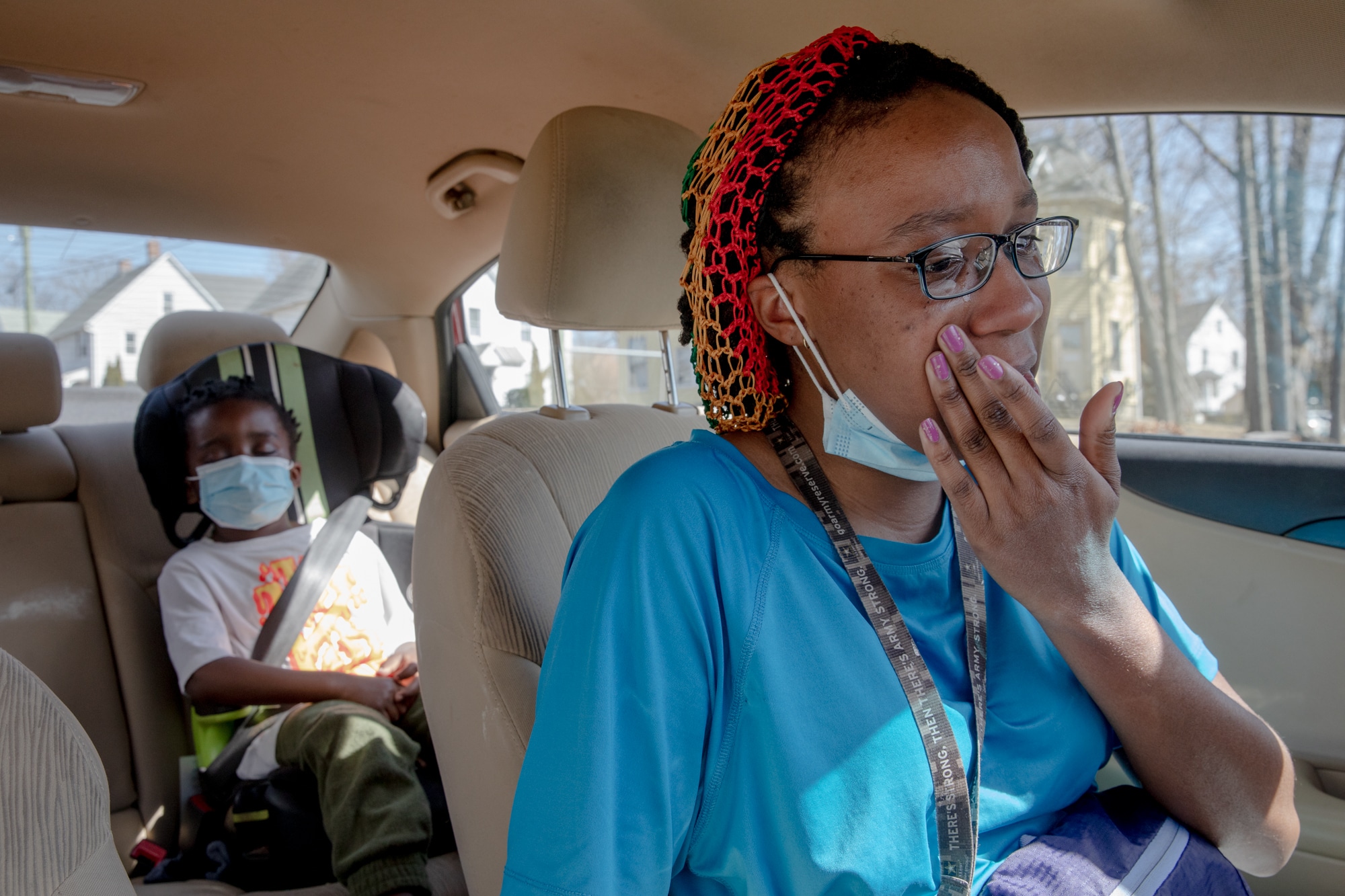 Moneisha Bryan sheds tears while talking about her past. Bryan said they were tears of happiness because her life is better than it was a few years ago.  “Sympathy for my old self,” Bryan called it. 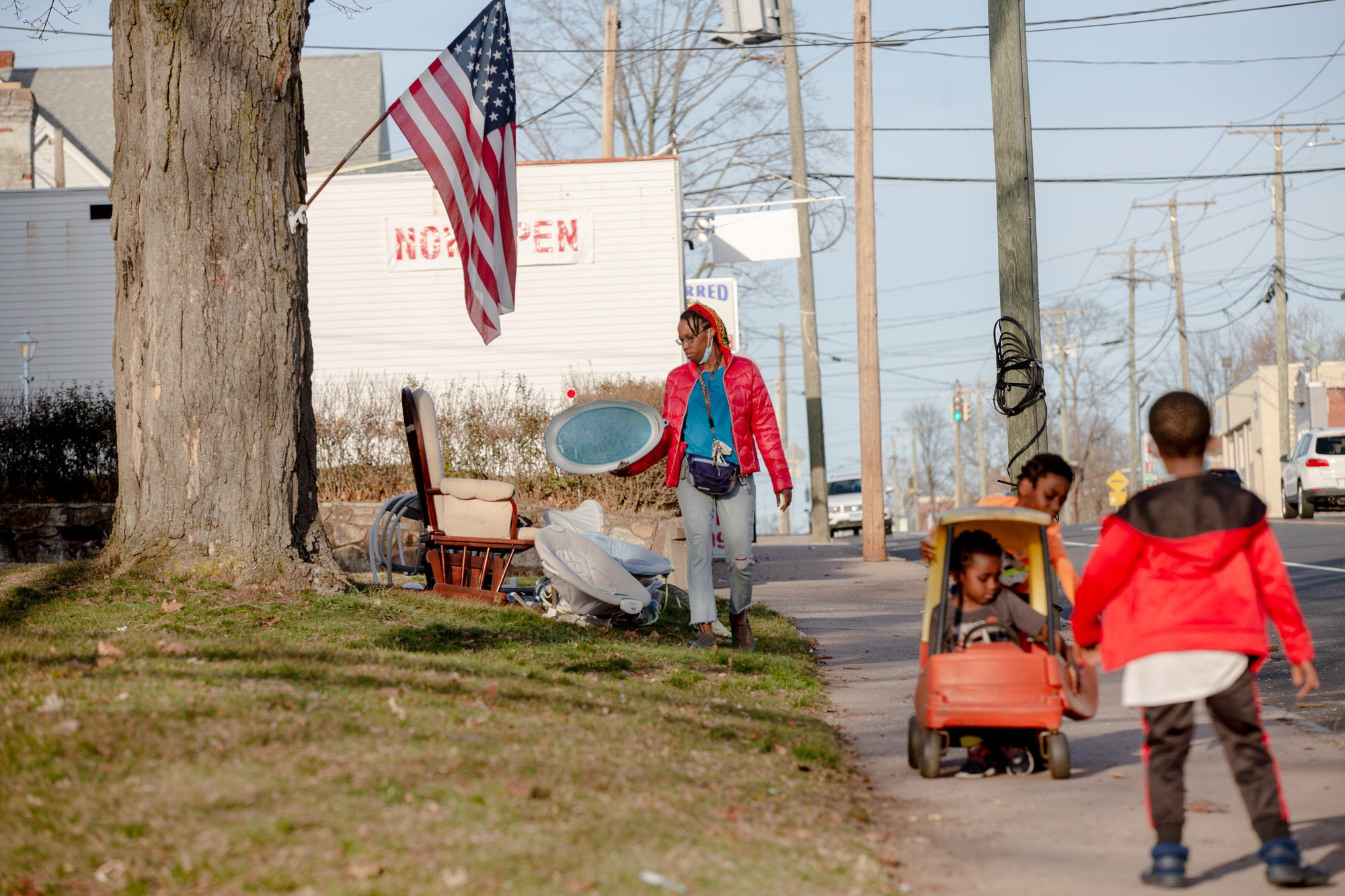 A few months later, as spring flowers bloom around Connecticut, Bryan is feeling better. As the weather warms up, she can again bring her sons to a nearby park to play outside. The stimulus check even allowed Bryan to send her two older sons to gymnastics for the first time, something she always wanted to try as a child. And, thanks to a recommendation from a friend and Medicaid, Bryan began to take anxiety and depression medications for the first time, which help her to sleep at night. 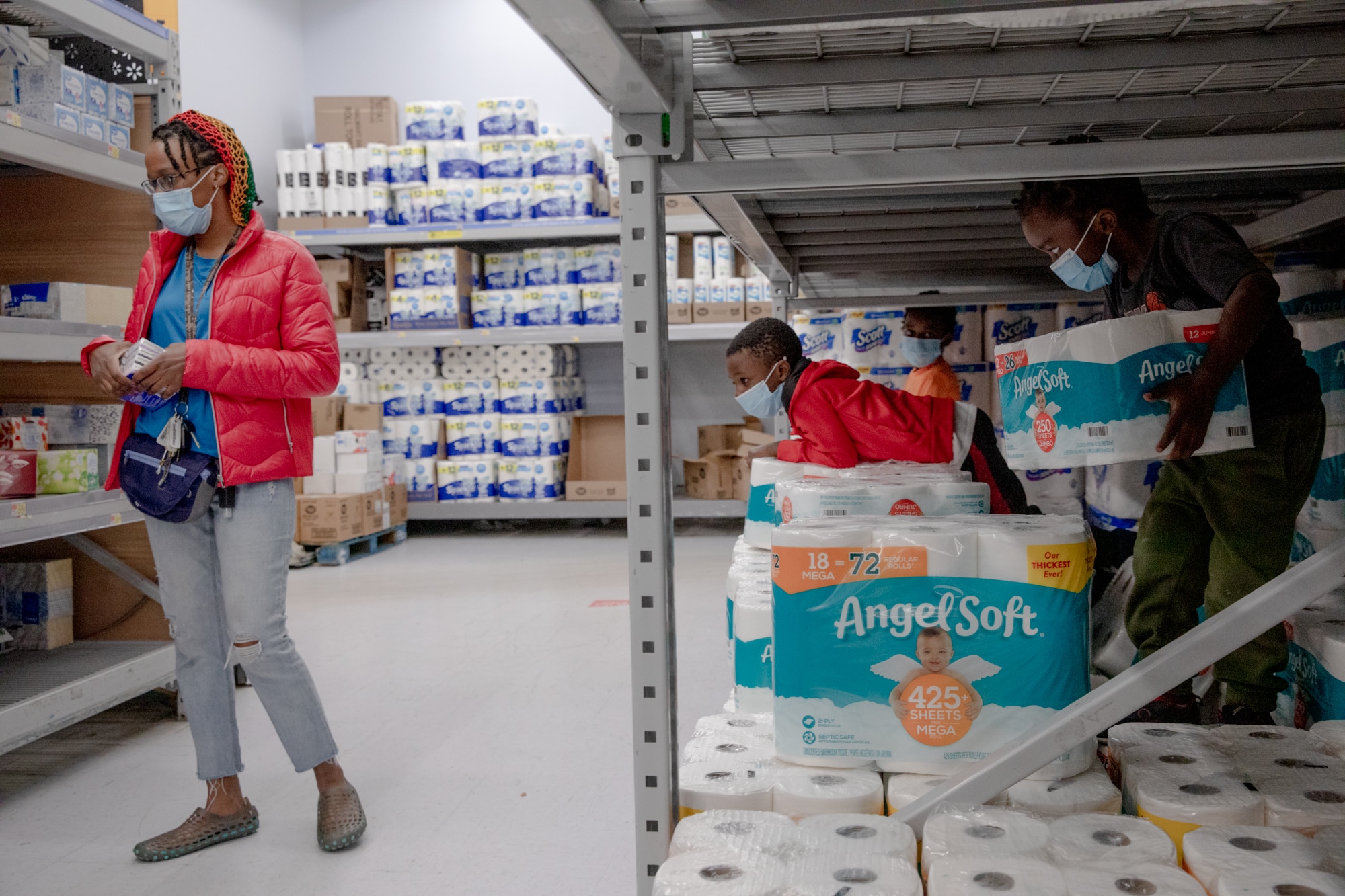 Bryan’s three sons hang out in the toilet paper section during grocery shopping and try to help their mom by fetching products for her. 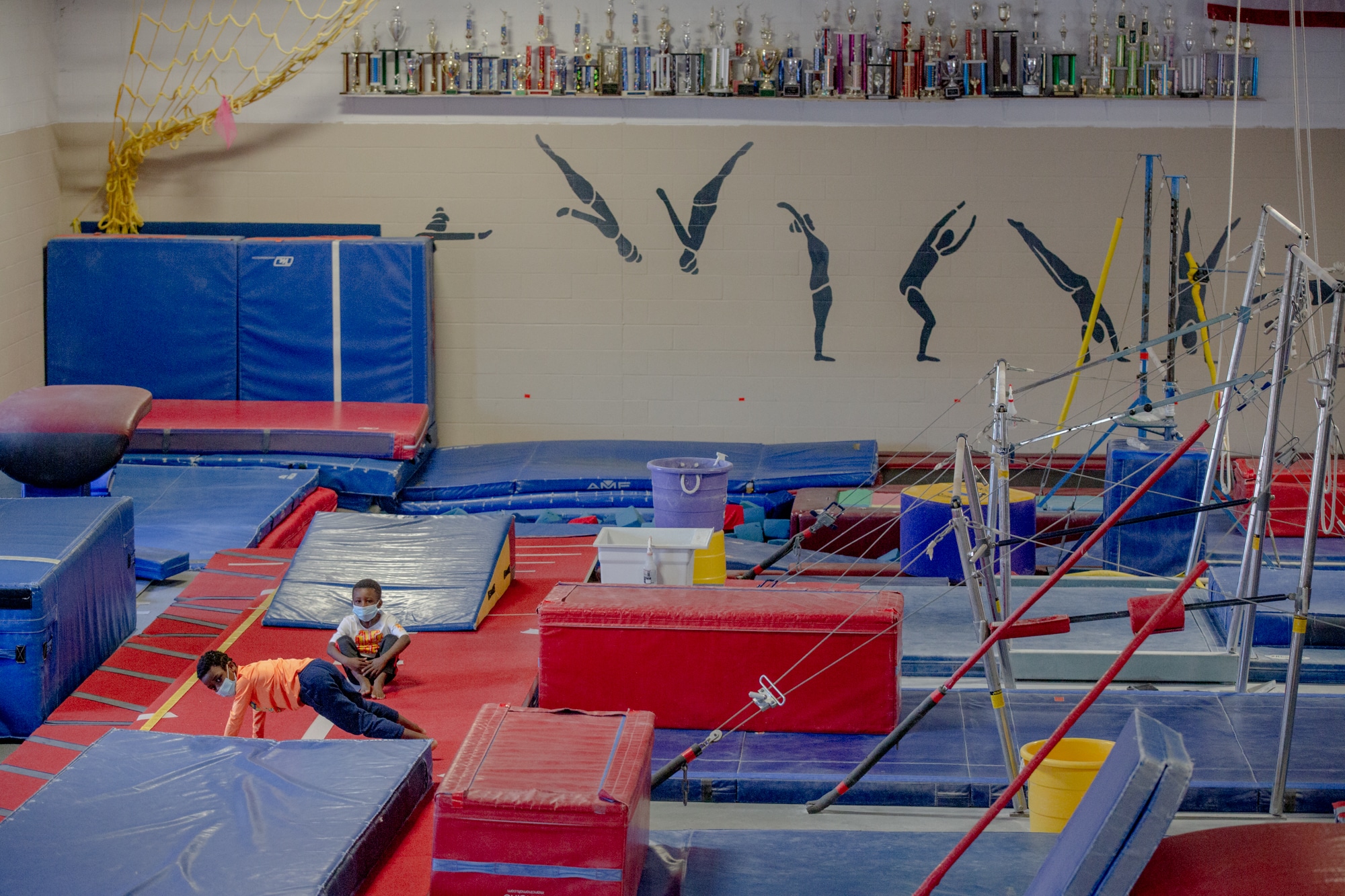 This spring, Bryan was able send her two older sons to a gymnastics class for the first time using a stimulus check. “[I’m] happy because I always wanted to do that when I was a kid,” Bryan said.

Yet, Bryan knows that she cannot rely forever on the government relief like SNAP benefits and stimulus checks. Nor does she want to. Aware that it’s not enough to work once a week, Bryan recently started her own business, purchasing clothes, home goods and accessories cheaply to sell to others at affordable prices. She is also thinking of doing hair for additional income.

But in the meantime, she’s not stressing about the pieces falling into place, living modestly, with furniture salvaged from the street and plenty of dollar-store purchases. 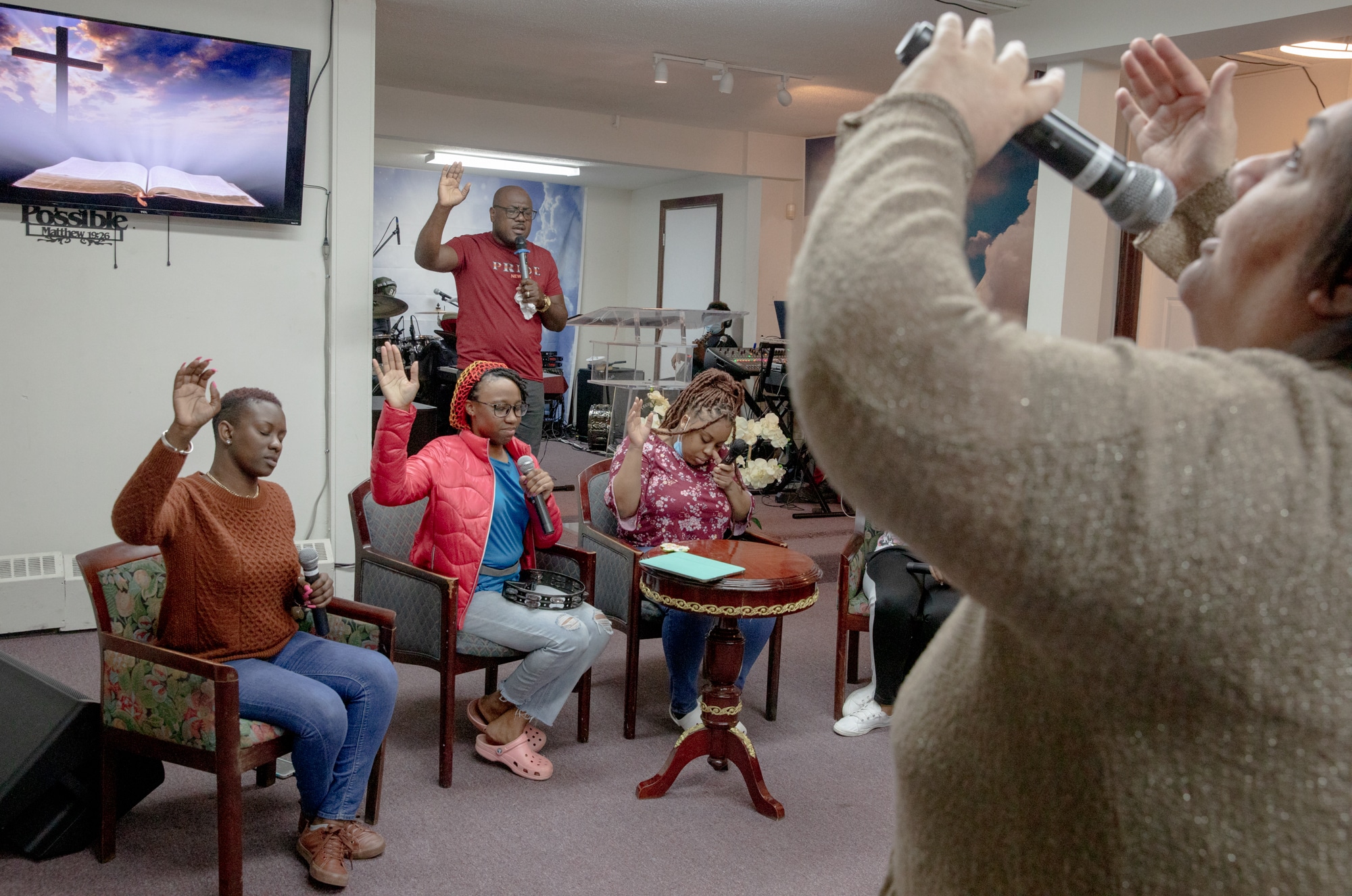 Bryan had a breakdown last winter but said she is now feeling better. “It was a curse that turned to be a blessing,” Bryan said. “The only thing that saved me was going to church.”

And she goes to church and prays, believing that God has a plan.

“So now, [I’m] accepting myself and still working towards my goal,” she said. “That’s how I’m different after the pandemic. That’s how it changed me.”

Yehyun Kim joined CT Mirror in June 2020 as a photojournalist and a Report For America Corps Member. Her role at CT Mirror is to tell visual stories about the impact of public policy on individuals and communities in Connecticut. Prior to joining CT Mirror, Yehyun photographed community news in Victoria, Texas and was a photo and video intern at USA TODAY and at Acadia National Park in Maine. She holds a master’s degree in journalism from the University of Missouri-Columbia. Yehyun was born and raised in South Korea.