A near-unanimous vote on 'Jennifer's Law,' but debate on 'clean slate' 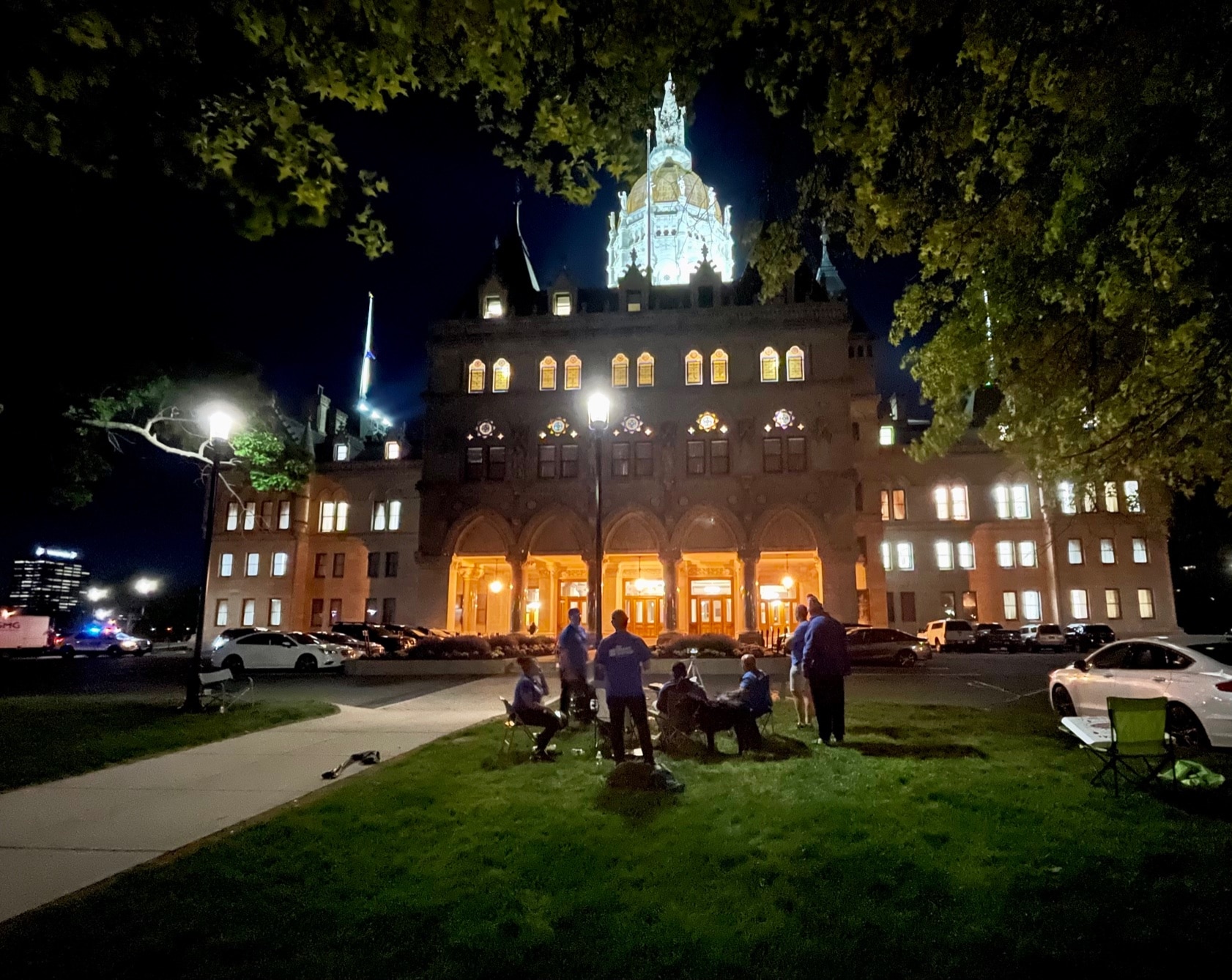 Members of the ACLU’s Smart Justice team watched the clean slate debate on a smartphone and listened on a speaker outside a Capitol closed to the public.

The Senate passed two justice-related bills on Tuesday: one intended to protect survivors of domestic violence, and one that would automatically erase some criminal convictions.

“It is past time to recognize the reality and the full scope of what domestic violence looks like,” said Sen. Alex Kasser, D-Greenwich. “It is much more than black eyes and bruises. It is a form of terrorism.”

The measure comes as domestic violence spiked during the pandemic. Nicknamed “Jennifer’s Law,” the proposal is named after Jennifer Dulos, who disappeared in 2019 and whose estranged husband was charged with her murder, and Jennifer Magnano, who was murdered by her husband in 2007.

The bill passed almost unanimously. The lone no vote came from Sen. Rob Sampson, R-Wolcott, whose concern centered on three sections of the bill that dealt with the treatment of landlords, which he said put them in “a very awkward position” and infringed on their civil liberties.

The measure requires landlords to respond within six hours to tenants who ask for their locks to be changed after they are named as a protected person in a restraining order, and to swap the locks within 48 hours, which Sampson said is a tight timeframe.

“I’m a landlord myself,” Sampson said. “And if someone texted me at 2:30 in the morning and said, ‘You need to change the locks on my apartment, because I have a restraining order against my boyfriend or girlfriend,’ and I did not answer till the morning, would I be in violation of this policy?”

Sampson proposed an amendment that would have removed these sections from the bill.

“I would like very much to be able to vote yes for this bill. I agree with it completely,” Sampson said. “And here I am, I’m faced with a problem because I believe these sections are onerous and, frankly, a little unnecessary.”

Kasser urged her colleagues to oppose Sampson’s amendment, asking them, “How would you feel if the people who posed a danger to you had a key to your home?”

Republicans castigated Democrats for the apparent contradiction of passing a measure protecting survivors of domestic violence and then supporting a bill that would automatically erase certain criminal convictions. Republicans unsuccessfully tried to pass a number of amendments that would have removed an array of crimes, from strangulation to criminally negligent homicide, from eligibility for automatic erasure.

“You are including folks that do not deserve this benefit,” Sampson said. “Some criminals and some crimes are more significant than others. It’s just that simple. We have been listing significant crimes that have significant penalties, and for significant reasons.”

But Democrats insisted that the bill would help people to be productive members of society and ensure their sentences actually end, so they aren’t punished for their crimes for the rest of their lives. And they pointed out that, in order to benefit from the relief, individuals would have to remain conviction-free for seven years to have their misdemeanors erased, and 10 years for felonies, after the person’s most recent conviction.

“This bill simply is about whether or not we believe somebody that who has paid the price through incarceration and has led a life afterwards without crime again, that they deserve to have a second chance to be able to get on with their lives and be productive members of society,” said Senate Majority Leader Bob Duff of Norwalk. “This bill is about a clean slate and providing people with an opportunity to move forward with their lives.”

“What we want to do is to make sure that people have paid for their crime — that’s what prison is for — and that they can get back on track so that they can operate within our society,” said Sen. Gary Winfield, D-New Haven and co-chair of the Judiciary Committee.

It would wipe all misdemeanors from a person’s record seven years after their most recent conviction. Class D or E felonies, which include crimes such as first-degree threatening, second-degree strangulation and first-degree unlawful restraint, or unclassified felonies punishable by up to a five-year prison sentence, would be wiped away after 10 years from a person’s most recent conviction.

Certain crimes would be ineligible for automatic erasure. Any family violence crimes or sexual offenses would not be automatically erased.

The measure approved by the Senate had a notable change from the bill that passed out of committee: Class C felonies, which include crimes such as second-degree burglary, second-degree manslaughter and second-degree assault, would no longer be eligible for automatic erasure.

The existing pardons process would also remain in place for individuals who wish to apply before their records are automatically erased or who have convictions ineligible for automatic expungement. Under existing law, people can apply to the Board of Pardons and Parole to have their records expunged three years after the disposition of a misdemeanor and five years after a felony.

If passed by the House of Representatives and signed into law, Connecticut’s clean slate law would be among the most expansive in the country. Utah‘s law only applies to misdemeanors and traffic violations; Pennsylvania, the first state in the nation to pass a clean slate law that uses technology to automatically seal people’s records, applies only to low-level misdemeanors. New Jersey and Michigan’s clean slate laws have similar waiting periods and include felonies, but, like Connecticut, each also have carve-outs ineligible for automatic erasure.

During the debate, Winfield recalled the old adage, “Don’t do the crime if you can’t do the time.” But, he said, the collateral consequences of criminal records effectively make many crimes life sentences.

“There is a point at which punishment should end,” said Winfield.

Shortly before the vote around 10 p.m., Duff thanked Congregations Organized for a New Connecticut, an interfaith group that has advocated for the bill for years, for introducing people with criminal convictions to lawmakers. Duff said these residents told them how their records continue to hold them back, years after they made their mistakes. And he reiterated that the bill before legislators offers them a promise of relief only after years of hard work remaining on the right side of the law.

“This bill is a step to give people to earn their lives back,” Duff said. “This bill doesn’t say the minute you get out of prison you’ve got a clean slate. You have to work for it.”