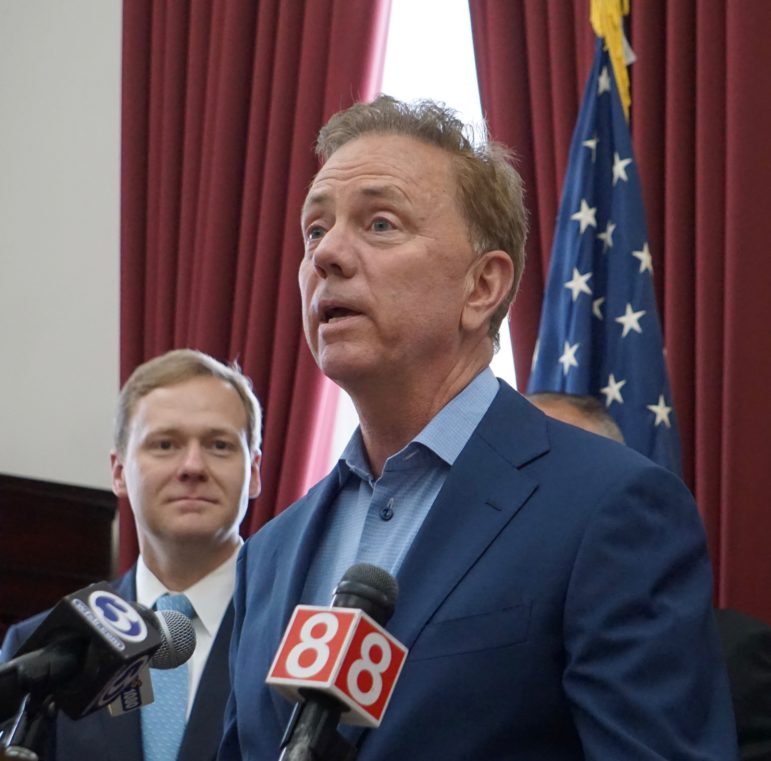 The Democrat-controlled House of Representatives inched closer Thursday toward a Saturday vote on a new state budget, even as negotiations with Gov. Ned Lamont’s administration bogged down late Wednesday night.

While the governor and his fellow Democrats in the House and Senate majorities reached consensus earlier this week on taxes, Ritter confirmed that issues involving borrowing — and, to a lesser extent, the statutory spending cap — remain challenges.

“If we don’t have a deal by dinner time, we’ll have to go our separate ways,” Ritter said, adding that his caucus is prepared to adopt the compromise budget it offered the administration and wants to start that process this weekend.

The regular 2021 General Assembly session closes at midnight Wednesday, according to the state Constitution. The Senate Democratic Caucus did not immediately respond Thursday morning to Ritter’s plans to hold a budget vote on Saturday.

Though the speaker didn’t disclose many specifics about the closed-door negotiations, one sticking point involves his proposal to bond as much as $2 billion over the next 10 years to finance investments in capital projects and programs in Connecticut’s poorest cities.

Ritter, a Hartford Democrat, pitched this investment as an olive branch to Lamont and other fiscally moderate Democrats. The legislature’s Finance, Revenue and Bonding Committee recommended creating a special fund to make these investments — to be paid for with two income tax surcharges on the state’s wealthiest households and a new digital media ads levy.

Lamont, who says any tax hikes would hinder Connecticut’s economic recovery from the coronavirus pandemic, also says increases aimed solely at the wealthy would prompt them to move out of state.

The speaker said Thursday he still believes borrowing is an acceptable alternative to the tax hikes. And while the governor has not shut the door on this borrowing, Ritter added, he was more interested in a three-year financing commitment rather than making investments in cities over a decade.

Max Reiss, Lamont’s communications director, also didn’t offer many specifics about the negotiations. “The governor’s position hasn’t changed when it comes to the budget principles that had led Connecticut to having one of the strongest fiscal positions,” Reiss said.

Connecticut has more than $3 billion in its emergency budget reserve and is poised to add another $1 billion to $1.5 billion to that tally after the fiscal year closes on June 30.

Lamont also has been a vocal advocate for strict adherence to the statutory spending cap, which tries to keep annual appropriations in line with the average growth in household income statewide.

But progressive Democratic legislators say they can’t remain within the cap and respond to the array of human services and other needs Connecticut faces after more than a year of the coronavirus pandemic.

Lawmakers want to pump hundreds of millions of additional dollars annually into municipal aid, social services, health care, local school districts and higher education. To make that work with the cap, the Appropriations Committee proposed employing an accounting maneuver governors and legislatures have employed multiple times in the past to work around the spending cap.

Known as a “revenue intercept,” this mechanism targets dollars before they arrive in the budget and assigns them for specific purposes. Because the cap only applies to budgetary appropriations, these dollars then can be used for local aid without violating the cap.

The committee recommends “intercepting” more than $300 million in sales tax receipts and assigning them — outside of the cap — for municipal aid.

Hartford Mayor Luke Bronin, president of the Connecticut Conference of Municipalities, urged state officials Thursday to get past the gridlock and send badly needed funds to cities and towns. The legislature pledged six years ago to dedicate hundreds of millions in sales tax receipts to local aid and has never delivered on the full amount promised.

“Directing a portion of sales tax revenue directly to cities and towns represented a small but important step toward reducing Connecticut’s ridiculous over-reliance on property taxes, and we need to protect that progress,” he said.

Republican leaders in the House and Senate have urged Lamont to hold firm on the spending cap issue and have said that if he vetoes a budget built on a cap workaround, then the GOP will help to sustain that veto.

Ritter said Thursday that Democrats already have offered to scale back that proposal. Though he didn’t offer details, this could be done by borrowing for some municipal aid, rather than using tax receipts to pay for it.

“It is an insignificant number, but I don’t have time for this,” the speaker said. “My caucus will not let me call a budget.”

And should a budget reach the governor’s desk and then get vetoed, Ritter said, there would be no hard feelings.

“I love the man. It’s a warm relationship,” he said of Lamont, adding that he remains optimistic a consensus will be reached. “But we have a deadline.”