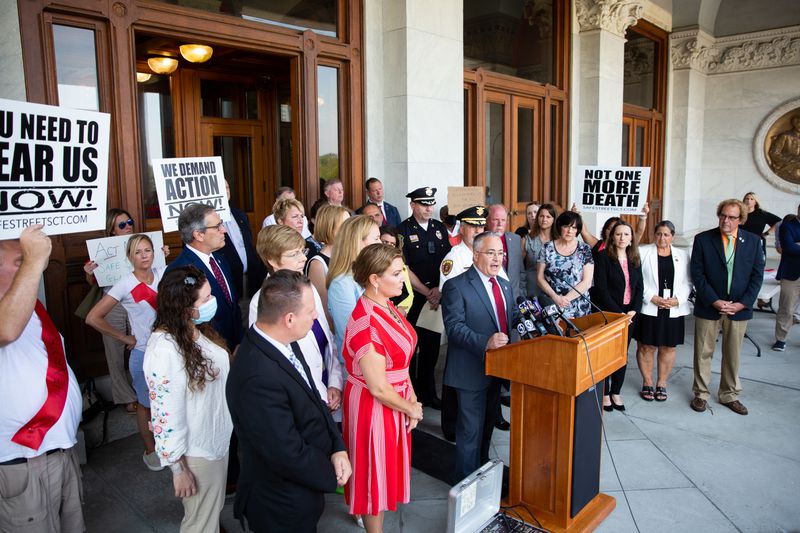 Republicans gather outside the Capitol on July 7 to talk about car thefts and call for a special session to address juvenile crime. Photo courtesy of The Hartford Courant.

On July 7, one week after a 17-year-old driving a stolen car allegedly hit and killed a jogger in New Britain, Republicans stood outside the Capitol to deliver a message: The juvenile justice system is failing.

Members of the mostly white crowd, including police chiefs from New Britain and Wolcott, told stories of out-of-control teens with “no regard for human life,” warning that vigilantes will take it upon themselves to protect their communities if young people continue to be released from jail following arrests for “violent sexual assaults,” and that police don’t know what they’re going to do once minors who chronically steal cars turn 18 because by then they’ll be sophisticated, emboldened criminals. 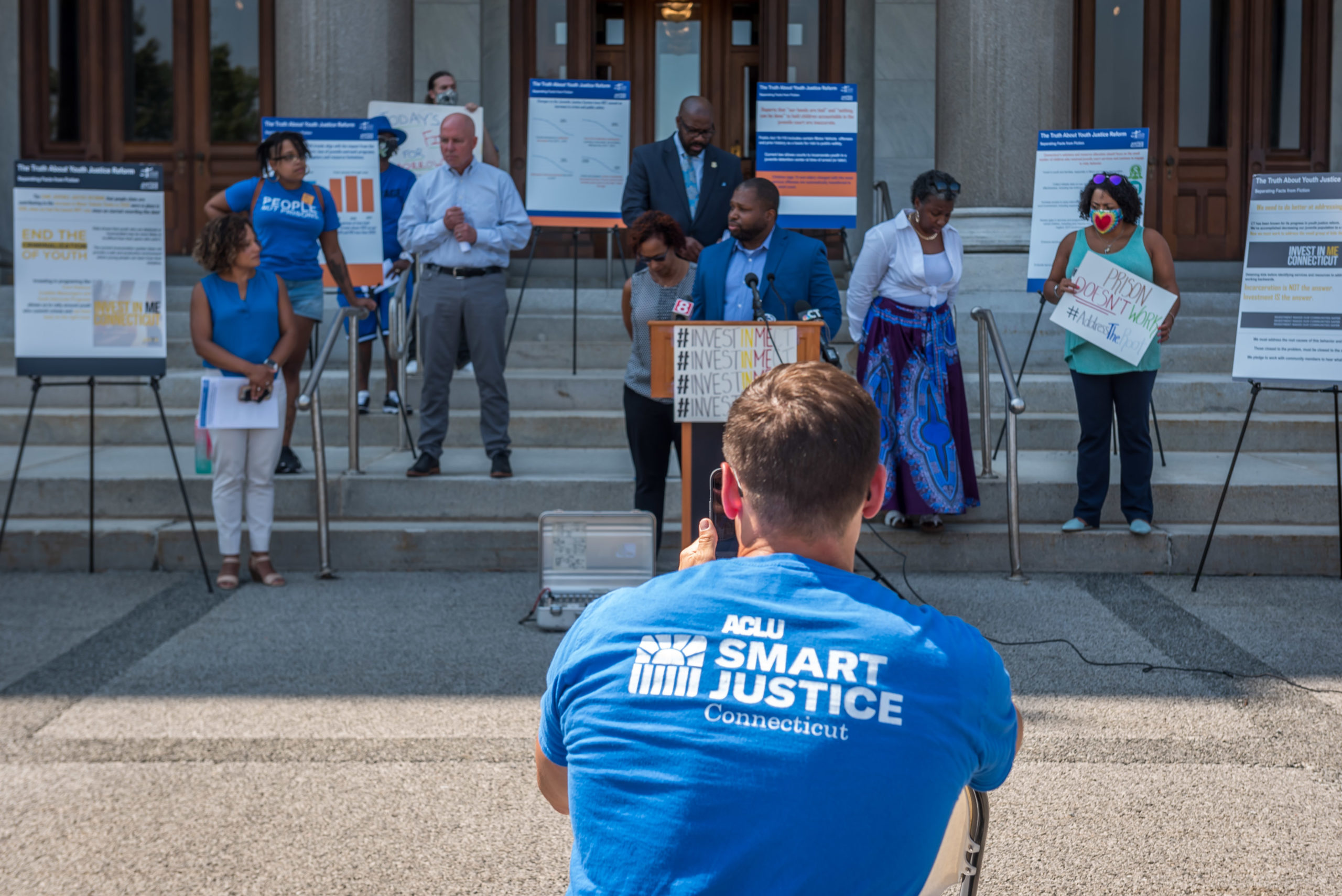 Sen. Gary Winfield, D-New Haven and co-chair of the Judiciary Committee addresses reporters on a press conference on juvenile car thefts on Aug. 6, 2021.

A month later, Democrats gathered at the same spot. The visual contrast to the Republicans’ press conference was striking. Instead of police officers standing next to lawmakers, there were posters of charts and bullet points, an effort to recast the narrative onto data-driven solutions to crime that don’t rely on young people serving time in prison.

And while Republicans focused on tragic stories and impassioned demands for accountability, Democrats honed in on facts and figures that showed car thefts hit a historic low in 2019 and noted that arrests for car thefts in the first six months of 2021 were roughly equal to the same period in 2019.

Data provided by the Judicial Branch.

They cautioned against punitive policies that they warned would disproportionately punish young people of color.

And they offered a tip for people worried about their vehicle getting stolen: lock your car.

Rep. Toni Walker, D-New Haven and co-chair of the Juvenile Justice Policy and Oversight Committee, implored journalists to get the facts straight and use data to inform their reporting.

“Do not give me anecdotal,” Walker said. “That is not fair to our state.”

The recent debate about juvenile crime, while showing differences between the two parties in style and substance, is hardly a new one. Nor are car thefts a new problem in Connecticut.

Preliminary figures released by the State Police show there were 8,439 motor vehicle thefts in 2020, the highest since 2008.

What has changed is where those thefts are occurring. Data show that as motor vehicle thefts have declined in Connecticut’s major cities, typically represented in the legislature by Democrats, they have increased in surrounding suburban communities, where Republicans are more likely to hold seats.

At the Democrats’ press conference, Sen. Gary Winfield, D-New Haven, pointed out that the narrative has shifted now that the victims of these crimes are from whiter suburbs than minority-majority cities.

“And then we paid a different level of attention and started talking about victims, but there were always victims,” said Winfield, the co-chair of the Judiciary Committee. “I slept with a knife under my mattress every night because I was a victim of crime constantly.”

Candelora said in an interview Thursday that Democrats are mischaracterizing the Republican position and have tried to divert the conversation from whether certain crimes should be treated differently and more easily transferred to adult court. He also said arrest figures were a flawed metric to gauge how common car thefts are — a report released earlier this year found that police made arrests in just 11.6% of cases in 2019.

“There’s been many more victims in our communities where the crime has not resulted in an arrest, and therefore that data isn’t captured,” Candelora said. “And that’s the piece of why the public isn’t believing that arrests are down, or juvenile justice crime is down. The arrests may be down, but people aren’t feeling any safer in their homes.”

Candelora said Republicans have been in the same private conversations as Walker, talking with the Judicial Branch and police officers about issues in the juvenile justice system.

“To suggest that we aren’t looking at the same data that she is, when we’re all in the same room together, is disingenuous,” Candelora said. 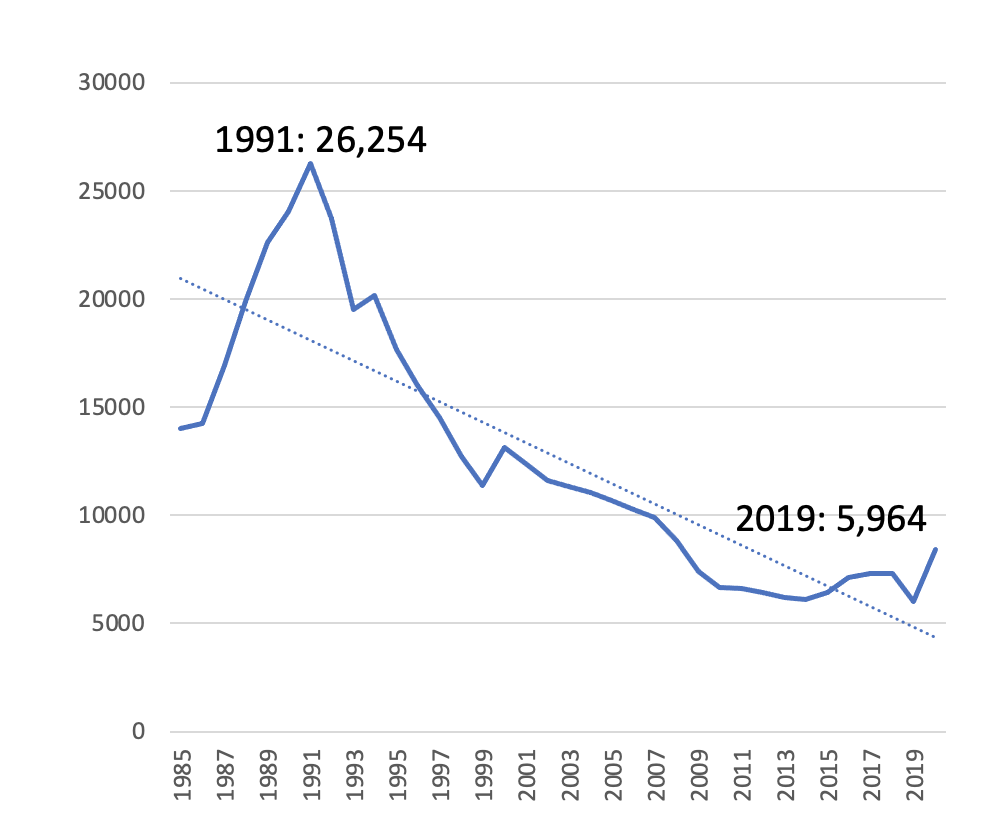 Motor vehicle thefts peaked in 1991, when there were 26,254. Photo from a Juvenile Justice Policy and Oversight Committee meeting in March 2021. Updated numbers indicate there were 8,439 car thefts in 2020.

Also in attendance was Michael Lawlor, a Democrat who has been in the middle of all things criminal justice related in Connecticut since the early ’90s. A former chair of the legislature’s Judiciary Committee and criminal justice point-person for former Gov. Dannel P. Malloy, Lawlor has been through these political fights before.

After the Cheshire murders in 2007, when two men got out of prison and murdered a woman and her two daughters during a horrific home invasion, Republicans running for election in 2008 signed a pledge that they would vote in favor of a three-strikes law if they were elected to the legislature. The proposal would have imposed a mandatory life sentence for anyone convicted of their third violent crime.

Democrats, Lawlor said, focused their campaigns that election cycle on what they’d accomplished in the past legislative session. After two special commissions submitted recommendations on how to ensure a tragedy like Cheshire didn’t happen again, Democrats voted with Republicans to institute a wide-ranging set of reforms, adding a full-time psychologist to the Board of Pardons and Parole and mandating board members have the complete files of people they’re considering for parole — changes that didn’t grab headlines like a three-strikes law, but ultimately made the prison system, and communities, safer, Lawlor said, and improved confidence in the justice system.

Republicans failed to translate those fears from the 2007 murders in the 2008 elections. Democrats picked up seats. Republican losses in the General Assembly were the worst since the post-Watergate shellacking of 1974.

Years later, during the Malloy administration, Republicans castigated the governor for the Risk Reduction Earned Credit, a program started in 2011 that allows incarcerated people to earn a maximum of five days a month off their sentence if they follow individualized treatment plans created by the Department of Correction. Those convicted of certain violent crimes are ineligible.

Lawlor said Democrats responded by crunching the numbers. They found that high-risk offenders were doing a greater percentage of their sentences since the risk-reduction earned credits were instituted than had been the case under the previous system, thanks to the program’s emphasis on empirical data.

“The complexity of it doesn’t fit on a bumper sticker,” Lawlor said. “As people come to understand what it really does and how it really works, I think people get it.”

Each time, Lawlor said, Democrats’ plan was the same.

“Lots of boring details — facts. Sometimes you have to say the same thing a thousand times before a person hears it,” he said. “This strategy does work. It just takes a while.”

A demographic breakdown of car theft arrests in 2020.

Lawlor was first elected to the House of Representatives by East Haven voters in 1986, two years before former President George H.W. Bush’s Willie Horton ad, a racist TV spot that assailed his opponent Michael Dukakis for being lenient on crime.

“I saw how quickly things went off the rails,” Lawlor said, between spending larger and larger slices of the state budget on prisons and widening racial disparities in the incarcerated population. “I see a glimmer of that going on right now.” 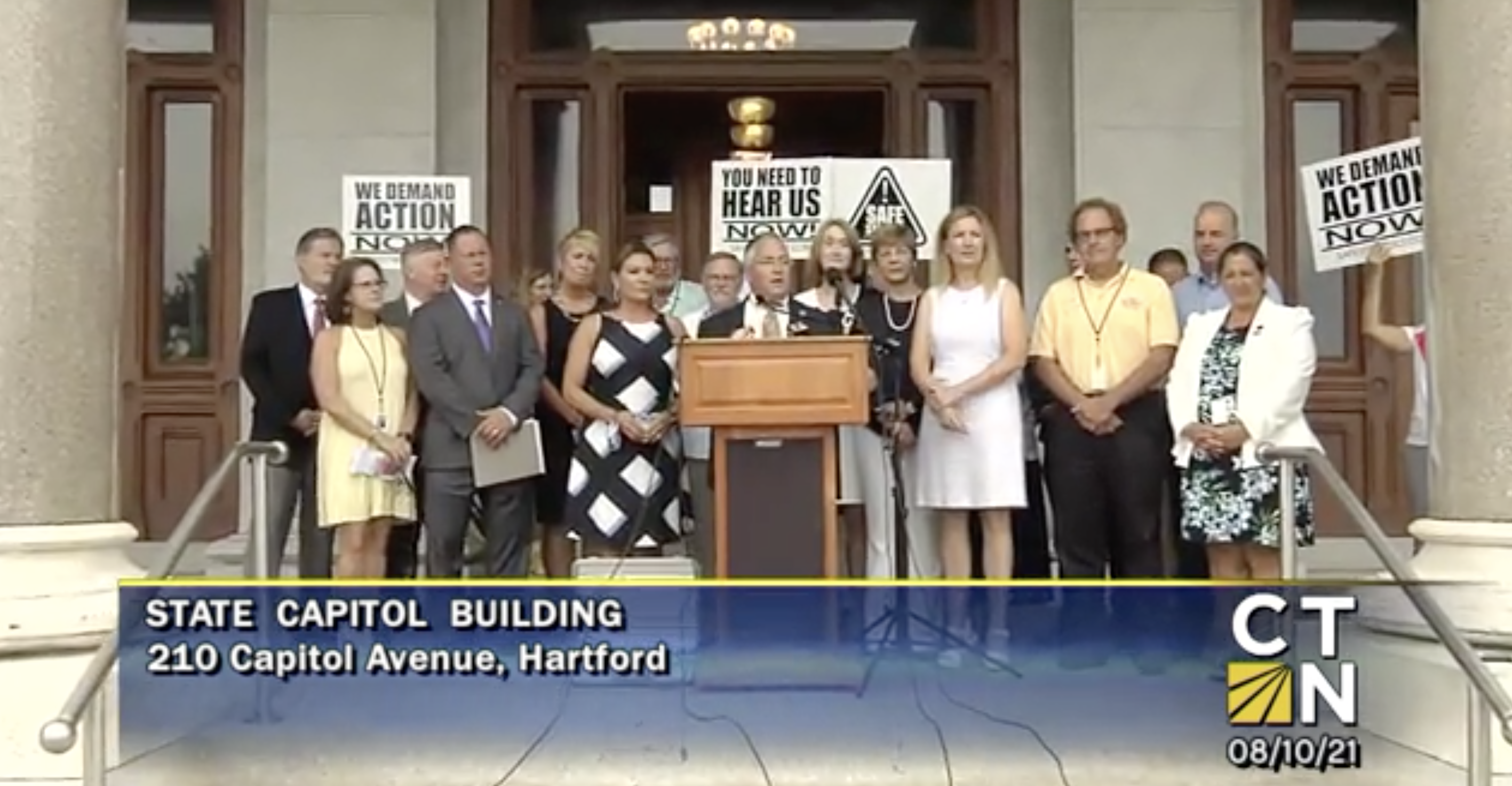 “Nobody feels that they’re safer today than they were five years ago or two years ago,” said Rep. Vincent Candelora, R-North Branford.

Republicans held another press conference on Aug. 10, sans police, to once again redirect the narrative.

“Republicans are not merely calling for just incarceration, and we recognize the complexity of this issue,” Candelora said.

They released their own proposals for dealing with car thefts, including requiring family support service interventions sooner in juvenile court cases, expanding the types of crimes for which a child older than age 12 is automatically transferred to the adult court, instituting around-the-clock monitoring of children arrested while they’re awaiting trial for another charge, and allowing cops to access all juvenile records to ensure they have all the information when determining whether to seek a detention order following an arrest.

“Let me be clear, we’re not in favor of incarcerating a child just because they steal their first car,” said Rep. Craig Fishbein, R-Wallingford and Ranking Member of the Judiciary Committee.

After the Republican press conference, Winfield said there was already a space for Republicans and Democrats, prosecutors and defense attorneys, police and advocates to talk about reforming the juvenile justice system: The Juvenile Justice Policy and Oversight Committee meets every month. They could have these conversations at those meetings, not at press conferences. There, members watch presentations on the latest juvenile justice figures. (There was one on car thefts in March.)

Winfield reiterated that understanding the data and correcting misperceptions stemming from the press conferences — that children who commit crimes aren’t incarcerated, that it doesn’t matter whether crime is higher or lower than past years — are critical. If not, he warned, “the public now begins to say, ‘Well then we’re not safe. You guys need to do something.'”

“If you allow this to get out of hand [and don’t] correct inaccurate information, you may find yourself in a place like 30 years ago, where you are incarcerating people at rates you don’t need to,” he said.