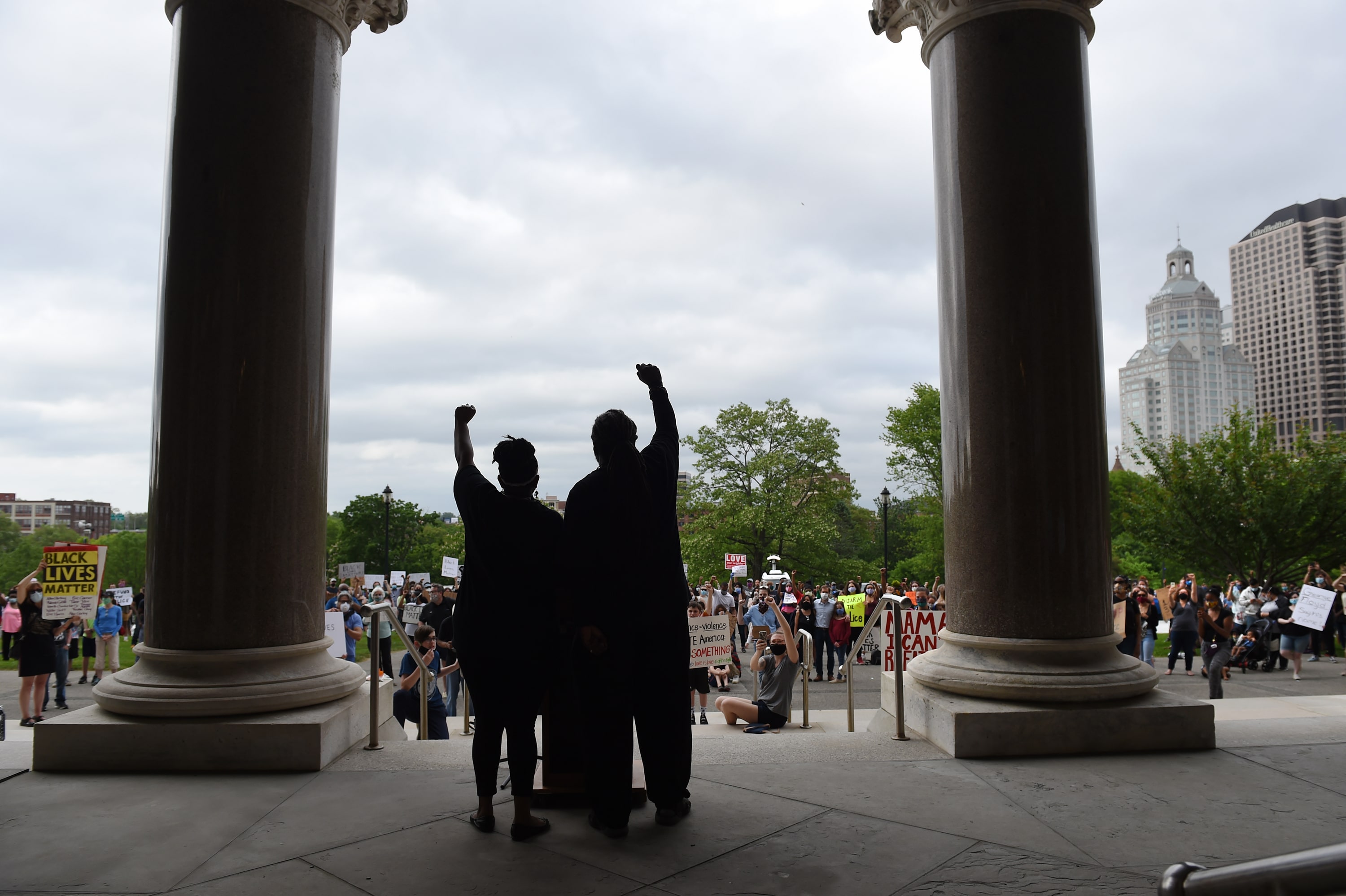 Bishop John Selders and his wife Pamela Selders, co-founders of Moral Monday CT, chant “Black Lives Matter” to a large gathering of protestors at the state Capitol in 2020.

The state Criminal Justice Commission has identified four finalists under consideration to be the state’s first-ever inspector general, a special prosecutor that will investigate and, if necessary, prosecute police officers’ use of deadly force.

They are are Moira Buckley, Robert Devlin, A. Ryan McGuigan and Liam Brennan.

The applicants were named in an agenda on the Criminal Justice Commission’s website. They will be interviewed in an open hearing on Sept. 27.

The inspector general will be tasked with investigating deaths in police and Department of Correction custody and determining whether to pursue criminal convictions. Coupled with a statutory change narrowing the circumstances in which police can use deadly force, these provisions of the bill are intended to shake up the status quo and hold police accountable for violent misconduct.

Legislators created the position in a special session in the summer of 2020 following the murder of George Floyd. But only existing prosecutors were able to apply for the job, leading advocates to question whether the office was truly independent, given how closely state’s attorneys and police work.

Members of the Criminal Justice Commission initially split on which career prosecutor to nominate for the job, prompting legislators to pass another bill expanding the applicant pool so that civil rights and defense attorneys, judges and federal prosecutors could apply.

At least two of the applicants have experience in criminal defense work. Buckley is currently an assistant federal defender. An attorney since 1997, she has defended people charged with criminal offenses in state and federal courts. She was an assistant public defender in the state’s Public Defenders Office, where she specialized in appellate defense for clients convicted of serious felony offenses. She represented people charged with crimes ranging from misdemeanors to capital felony murder when she was a partner at Shipman and Goodwin, LLP and was the sole member in the Law Office of Moira Buckley.

McGuigan is a principal attorney at Rome McGuigan, P.C. A former prosecutor in the Stamford and New Britain Judicial Districts, McGuigan specializes in criminal litigation but has experience in corporate fraud, white-collar criminal investigations and civil litigation. His biography on his firm’s website said he’s tried numerous cases to verdict and has won acquittals for major felonies in state and federal courts.

Devlin is the chair of the Connecticut Sentencing Commission. He has been a judge in appellate and superior courts, hearing criminal cases in judicial districts across the state. From 2010 to 2017, he was the chief administrative judge for the Superior Court’s Criminal Division, where he oversaw criminal judges across Connecticut. Before getting appointed to the bench, he was a federal prosecutor the U.S. Department of Justice’s Organized Crime Strike Force. He was recognized by the U.S. Attorney General in 1992 for his work on the prosecution team that secured convictions for higher-ups in the New England mob.

Brennan was a federal prosecutor for 10 1/2 years, serving as the director of the Public Corruption Task Force in Connecticut from 2015 to 2018. Before that, in 2014, he was one of the prosecutors who tried former Gov. John Rowland, ultimately securing a conviction that led to a 30-month sentence.

Before his current job as the executive director of the Connecticut Veterans Legal Center, Brennan was an attorney in the Community and Economic Development Unit at the New Haven Legal Assistance Association.

The finalists, all of whom are white, are interviewing for a job to hold police officers accountable George Floyd’s murder reignited calls for racial justice across the state and country.

Experts estimated in an analysis of last year’s police accountability bill that it would cost almost $1 million to fund the inspector general employees’ salaries and benefits. The staff would include the inspector general, a senior assistant state’s attorney, five inspectors, a forensic analyst and a paralegal. The analysis estimated the office would conduct 25 investigations each year.