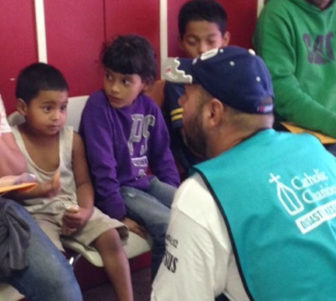 Washington – The City of Bridgeport is exploring whether it has the facilities that would meet federal requirements to host some of the Central American migrant children who are in overcrowded federal holding centers along the borders, said a city spokesman.

“No decisions have been made on this front. But as a father of four kids, and as the chief executive of our state’s largest city, Mayor Finch believes that it’s his duty to at least explore possible ways to help kids who are in-need,” said Brett Broesder, spokesman for Bridgeport Mayor Bill Finch. “He sees this as an issue about ensuring the safety and security of children, not about politics. He also believes that sheltering kids who are in-need has the potential to strengthen Bridgeport’s already strong immigrant community.”

According to the U.S. Census Bureau, there is a sizeable community of Central American immigrants living in Fairfield County.

About 11,000 Central Americans lived in Stamford in 2012, the census bureau said, and nearly 6,000 lived in Bridgeport. In both cities, the largest group came from Guatemala, although there were also thousands from Honduras and El Salvador.

The Obama administration has asked states, cities, counties school districts and nonprofits and others who might be able to offer residential services for the children, for a month or more, until they can be released to relatives or undergo immigration procedures that would determine whether they have a legal right to stay in the United States.

The Department of Health and Human Services Office of Refugee Relocation (ORR) is offering grants in the amounts of between $500,000 and $100 million to help pay for the temporary care of more than 55,000 children who have arrived unaccompanied to the United States.

“Mayor Finch knows it would be unfair to Bridgeport residents to even consider an effort that would take away city services or resources,” Broesder said. “He’s only willing to consider this if federal funds pay for all transportation, legal representation and shelter costs – or any other costs associated with taking action.”

New Haven Mayor Toni Harp is also looking at city properties to determine if New Haven can apply for one of the grants. Some nonprofits in the state that have residential facilities for children are also exploring the possibility of applying for an ORR grant before an Aug. 5 deadline.

Gov. Dannel Malloy has ruled out using state properties to house the kids, saying there are none that would meet federal specifications.

The flood of unaccompanied foreign children has blindsided the Obama administration, which has asked Congress for $3.7 billion to deal with the crisis – and for a way to change federal law so the children could be deported more swiftly to their homelands.

Sen. Richard Blumenthal, D-Conn., who traveled to the U.S.-Mexico border last week as part of a congressional delegation, said he opposes any effort to change the law to speed up deportation of the kids. A human-trafficking law passed in 2008 prevents Central American children from being deported before their cases have been reviewed by immigration judges.

‘These are children. This is not their fault they are fleeing their country,” Blumenthal said.

He said many of the kids are victims of gang violence and suffered mistreatment, even rape, by the traffickers that helped many of the cross the Rio Grande.

“Almost all of these children have stories of vicious persecutions,” he said.

He said the children were further traumatized when they were apprehended by the Border Patrol, which did not mistreat the kids but whose agents wear uniforms that scare them.

“All of their lives they have been in fear of people in uniform,” he said.

Blumenthal visited San Antonio, Texas and Lackland Air Force Base, where some of the migrant children are housed.

He said “the vast majority of the children” have relatives in the United States, and that after screening of these relatives, will be reunited with their U.S.-based families.

“It was an emotional experience for me,” Blumenthal said of meeting the immigrant children.

Congressional Republicans, however, want to amend federal law so Central American children can be swiftly deported.

President Obama has invited President Otto Perez Molina of Guatemala, President Juan Orlando Hernandez of Honduras, and President Salvador Sanchez Ceren of El Salvador to the White House on Friday as part of an effort to find a solution the migration crisis.