Governor’s budget needs $300M in borrowing to stay in balance 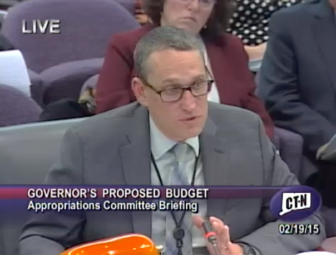 Gov. Dannel P. Malloy’s new budget would need more than $300 million in borrowing to cover operating costs over the next two years, if projections from nonpartisan analysts and the state treasurer’s office are correct.

The governor’s budget relies on a controversial fiscal practice that faces increasing scrutiny and drives up the interest rates Connecticut pays to borrow funds for school construction and other capital projects.

And while Malloy’s budget director, Office of Policy and Management Secretary Benjamin Barnes, said there is merit to reforming state practices regarding “bond premiums,” he also challenged critics to identify $300 million in spending cuts if they want to avoid the premiums.

The Democratic governor’s budget includes $1.65 billion next fiscal year, and $1.77 billion in 2016-17, to cover debt service in the general fund.

But those appropriations together are $305 million shy of what state Treasurer Denise L. Nappier – also a Democrat – said is needed to cover Connecticut’s debt obligations. And they are $328 million less than what the legislature’s nonpartisan analysts estimate is necessary.

Malloy’s budget would rely on borrowed funds to make up the difference.

“Why is that (the premiums) not mentioned in this year’s budget book?” Sen. Robert Kane of Watertown, ranking GOP senator on the Appropriations Committee, asked Barnes Thursday as he briefed lawmakers on the budget. “Are we using that money to balance the budget?

“This has been a longstanding practice,” Barnes responded. And while he added that he understands proposals to change the use of bond proceeds, the administration would expect critics to find $300 million in spending cuts to avoid the need for more revenue.

“This is not the year to do that, in my opinion,” he said, adding that the governor already has made tough choices that include difficult cuts in social services and health care programs.

At issue is a tool that helps the treasurer’s office market the state bonds sold on Wall Street.

The state, in some instances when issuing bonds, will pay a higher interest rate than originally planned in return for a premium – extra money to the state in addition to the bonds’ face value.

Republican legislative leaders say the state should pay cash to cover its debt payments, take premiums only when necessary to attract investors, and use the proceeds to accelerate debt reduction.

But if the state intentionally budgets too little to cover its obligations, it has to dole out premiums in hefty amounts – and drive up borrowing costs for many capital projects in the process – just to balance its books.

Nappier insists that the bond market drives when premiums are necessary. The treasurer also has said that when interest rates are low – which they have been throughout Connecticut’s lengthy recovery from The Great Recession – investors are more likely to pay premiums and insist upon higher rates of return.

But GOP lawmakers counter that Connecticut has paid premium rates far more frequently since Malloy took office in 2011 than it did under the prior administration of Republican Gov. M. Jodi Rell.

From the 2005 through 2010 fiscal years, the state took, on average, $36 million per year in premiums, according to records from the treasurer’s office.

Even in 2009 and 2010, when Connecticut’s economy was slumping badly – and interest rates were low – premiums averaged $37.5 million per year.

In the first four fiscal years of the Malloy administration, from 2012 through 2015, premiums have averaged almost $87 million.

The 2011 fiscal year was split, with Rell serving as governor during the first six months and Malloy during the final six. The state took $74.6 million in premiums that year – almost all of it occurring during the Malloy administration.

And Malloy’s new budget would require premiums that would drive his average up even higher.

Nappier also has said it is up to the legislature and the governor to decide how those premium proceeds are used.

Still, both she and Republican leaders have proposed legislation this year to ensure premiums could not be used to replace operating funds.