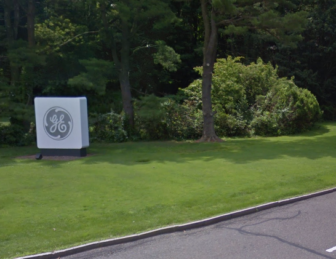 The GE logo marks the entry to its headquarter campus in Fairfield.

General Electric’s threat to leave Connecticut has morphed from a narrow complaint over taxes to a broader conversation with Gov. Dannel P. Malloy about economic stability in a state with a sputtering cash flow, high per-capita debt and worsening pension obligations.

The company’s well-publicized evaluation of whether the state remains a suitable corporate home is expected to yield a business tax cut Tuesday when the General Assembly convenes in special session, but it also is a factor in Malloy’s recent proposal to defuse a looming pension crisis.

“I think the tax changes are very important, and their ability to see a clear road to avoiding a cliff on the pension situation is very, very, very important,” Malloy told The Mirror on Friday amid his continuing talks with GE.

Based on current obligations and the return on investments by the pension fund, Connecticut’s annual pension contribution of $1.5 billion is projected to grow exponentially, doubling by 2025 and more than quadrupling as it peaks in 2032. It is one of several factors that businesses fear inject a risk of fiscal unpredictability in the coming decade.

Connecticut ranked 47th among the 50 states in fiscal health in a study published in July by George Mason University. It found the state with general obligation debt double the national average, a badly underfunded pension system and nothing set aside for retiree health benefits, which cost $1 billion annually.

Malloy and others, including some who initially dismissed the relocation threat GE first made in June as solely motivated by taxes — it came immediately after passage of a two-year budget that raised taxes by $1.5 billion — say they believe the company is trying to gauge the state’s commitment to fiscal reform and economic stability. House Speaker J. Brendan Sharkey, D-Hamden, noted GE is monitoring the work of the new Commission on Economic Competitiveness.

“It reflects that GE has legitimate concerns about the state’s long-term [fiscal] health, which I believe we have and are addressing,” Sharkey said. “That was not just rhetoric on their part; it was real. It’s important I think for us here in Hartford to make it clear, to not only GE, but others who care about these issues and are watching, that we get do get it and that we are taking these issues seriously.”

That is a turnaround since June, when many lawmakers skeptically viewed GE, which famously paid no U.S. taxes on worldwide profits of $14.2 billion in 2010, as simply trying to duck taxes, not act as a catalyst for the General Assembly to think more strategically about business climate and structural fiscal issues.

In response to complaints by GE and other corporations, legislators returned by the end of June to roll back $178 million in business taxes, including planned tax hikes on data processing and web development services, and delayed for one year a controversial shift to unitary reporting within the corporation tax.

Some of the fault for the legislative skepticism rests with GE, whose public announcement that it was considering moving its corporate headquarters came on the heels of the vote in June to increase taxes. The day after the regular session ended, GE’s chairman and CEO, Jeffrey R. Immelt, told employees in an email he had “assembled an exploratory team to look into the company’s options to relocate corporate HQ to another state with a more pro-business environment.”

GE did not make a spokesman available for this story, and a representative of its lobbying firm, Gaffney Bennett, declined comment. While the company has declined to precisely articulate what changes it would like to see in Connecticut, Immelt insisted in a speech last month to the Business Council of Fairfield County that his concerns reached beyond GE’s tax liability.

“We’re a company that … doesn’t look for special deals, but we need an ecosystem that’s forward-looking, that’s future-looking, that’s willing to fight hard to be competitive and enduring for the future. We don’t want that just for GE — we want that for everybody that’s in this room,” he said, according to the CT Post. “That’s why we’re looking not just here but other places for where the eventual headquarters of the company will be. We will always have a big presence in Connecticut, but we think the power of an ecosystem is important.”

Exactly what GE sees as the ideal ecosystem is unclear.

“They have kept everything very, very close to the vest,” said Jeffrey Hyde, a member of the Commission on Economic Competitiveness, who formerly was a senior tax counsel at GE. “I do know them well enough that I’m not asking my former colleagues what’s going on.”

But Hyde says he is aware generally of the factors influencing the choice of a corporate headquarters: transportation, quality and availability of the workforce, cost of living, and the ability and willingness of state and local government to work with them.

Taxes influences where investments are made, either in a headquarters or other facilities, he said. Corporations look for “outliers,” provisions making one jurisdiction less attractive than another.

“What are the things in that jurisdiction we need to focus on? What are the outliers, state and locally, nationally and sub-nationally?” Hyde said. “What are the consequences for revenue inflow and business operations outflow? If it’s a huge outlier, we don’t invest there. If it’s a quirk, maybe there are ways to work around the quirk.”

Hyde and others, including Joe McGee, the commission chairman and vice president of the Business Council of Fairfield County, said trying to assess GE’s wants and needs are further complicated by the rapid change in its focus

GE moved its headquarters from Manhattan in 1974 to Fairfield, a Bridgeport suburb connected to other company offices in Norwalk, Stamford and New York City. It evolved from its industrial roots – it was founded more than 120 years ago by, among others, Thomas Edison – into one of the world’s largest financial services companies.

The search for a headquarters comes as GE once again is remaking itself, seeking bidders for GE Capital, which has offices in Norwalk and Stamford, and selling its appliances division. It is rebranding itself in a television campaign and in social media as a “digital industrial” company with a prominent new software division, GE Digital.

“I think that transition is huge,” Hyde said.

Malloy declined to discuss details of his talks with GE, citing ground rules agreed upon by the company and administration. But he acknowledged being aware that GE representatives were in the audience Thursday when the Commission on Economic Competitiveness met at the Legislative Office Building in Hartford.

“I know they were there listening to the discussion the other day, and I don’t blame them. I think it’s important that we get the tax side of the equation done, and it may determine whether the headquarters stays in Connecticut,” Malloy said. “It may also determine how many jobs, even if the headquarters…were located elsewhere, how many other jobs stay here. This is all interconnected. And it’s not just GE.”

Bonnie Stewart, a vice president at the Connecticut Business and Industry Association, said that, too, is CBIA’s message to legislators: Many more businesses than GE are looking for signs that the state is serious about making structural changes to end a recurring cycle of fiscal crises.

“We’ve been hearing that from our companies,” Stewart said. “They are looking to the long-term stability of the state. It’s not a question of this year or next year.”