Fight begins over lessons to draw from GE’s departure 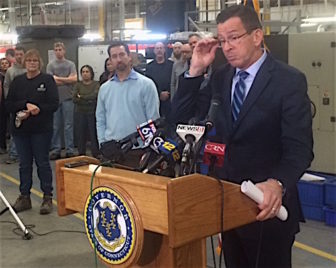 Gov. Dannel P. Malloy takes questions about GE at a hastily arranged appearance at Pegasus Manufacturing in Middletown. At left is the company president, Chris DiPentima.

Connecticut’s political elite raced Wednesday to frame General Electric’s decision to abandon its 1970s-era campus in suburban Fairfield for a new global headquarters in downtown Boston as everything from merely disappointing to the politically cataclysmic.

After publicizing its relocation study in June and pointedly tying it to a fresh business tax increase, GE muddied the cost issue by selecting as its new home another northeastern state known for a productive work force and a high cost of doing business.

Jeff Immelt, the chief executive officer who divested GE of its financial services business in Stamford and Norwalk and rebranded the company as “a high-tech global industrial company,” said GE was lured by Boston’s high-tech culture. He made no specific mention of taxes or business costs.

The relief felt by the leaders of the legislature’s Democratic majority was palpable. See, they collectively said, GE’s move was about the internal business needs of a company in transition, not a reflection of Connecticut as a place to do business.

“While I am disappointed that GE has chosen to relocate its headquarters, given all the facts, moving some of their employees to Boston’s Seaport matches their shift in business strategy,” said Senate President Martin M. Looney, D-New Haven.

Nonsense, replied Republicans, the move reflects a failure of the Democratic leadership in the executive and legislative branches to keep a leading corporate citizen happy, even after GE made clear they were exploring other states.

“They practically called them names, showed a total lack of respect for an international business that any state would drool to have. What do you think any other business of a lesser caliber than GE thinks right now?” said Senate Minority Leader Len Fasano, R-North Haven.  “It’s a bad, bad message that we have sent to every business in the state of Connecticut.”

Those talking points are certain to echo throughout the 2016 campaign for control of the General Assembly, alarming a business community desperate for a more nuanced debate about what Connecticut needs to compete in a rapidly changing economy.

“The political debate is, ‘Who lost GE?’ ‘The Democrats lost GE.’ That is not the issue here,” said Joe McGee, the vice president of the Business Council of Fairfield County and co-chair of a state commission studying economic competitiveness. “If that becomes the debate, we’ve lost a far more important story.”

McGee said GE’s selection of Boston, the tech capital of a state ranked first in the nation by Bloomberg for overall innovation climate and first for “high-tech density,” should impart several lessons: Cost and taxes are not everything, but Connecticut still has serious problems.

“Yes, taxes matter. Labor, all those things matter. But this story fundamentally is about innovation and a major company feeling that the innovation environment they need is in Boston and not in Fairfield, Connecticut,” McGee said. “That’s an important understanding.”

Republicans pounced on the news that broke in the morning, when The Boston Globe reported a decision that GE had been planning to announce Thursday. They filled a void left by Gov. Dannel P. Malloy’s decision to say nothing until hearing directly from GE.

The administration hastily arranged for Malloy to speak to the press at Pegasus Manufacturing in Middletown, a company that has thrived in recent years. A bonus is that Pegaus is a supplier to GE’s Ohio-based jet-engine business.

“Of course, I am disappointed,” Malloy said. “I know many in Connecticut share the disappointment and frustration. Today’s decision is a clear signal that Connecticut must continue to adapt to a changing business climate.”

Malloy made the best of the loss. He said GE’s departure reinforces his case for the state to invest heavily in transportation infrastructure and tackle the state’s unfunded pension liability, which GE and other businesses see as a potential source of continued fiscal instability.

“I think GE leaving is cataclysmic, really,” said Rep. John H. Frey, R-Ridgefield. “I do think it is a defining moment for Gov. Malloy, and it’s not a good one.”

Frey was the legislator who called Malloy on a Sunday after hearing from Jeffrey S. Bornstein, a constituent who is GE’s chief financial officer, to complain that a business tax increase was factoring into the corporation’s search for a new home.

“I called the governor. He was the first call I made. To his credit, he called me back in five minutes,” Frey said, recalling how he warned the governor about Bornstein’s complaint. “I said, ‘I know this guy. He’s serious.’ ”

But Frey said Bornstein and others at GE said they felt Malloy was slow to take their concerns seriously, even as governors from states in the South, Midwest and Northeast all made a pitch. GE has not publicly commented on its negotiations with Connecticut, instead praising Boston.

“We want to be at the center of an ecosystem that shares our aspirations. Greater Boston is home to 55 colleges and universities,” Immelt said in a statement posted on GE’s web site. “Massachusetts spends more on research & development than any other region in the world, and Boston attracts a diverse, technologically-fluent workforce focused on solving challenges for the world.”

Immelt said GE had been considering a move for more than three years, but it did not begin its formal review of relocation sites until June — when it issued a statement complaining about a budget it said makes “businesses…and citizens seriously consider whether it makes any sense to continue to be located in this state.

The Republican Party, which holds no congressional or statewide offices and is a minority in the General Assembly, used the announcement in an email appeal for contributions and membership.

J.R. Romano, the chairman of the Connecticut Republican Party, said he doesn’t care if the tax increase, ultimately, was not decisive in GE’s deliberations. The governor has acknowledged that the state’s long-term fiscal stability was a concern for the corporation, he said.

“We are massively in debt. Companies like GE see that. This is not a move that is about greed,” Romano said of GE’s decision to relocate in another high-cost state, albeit one offering more than $140 million in incentives. “It’s a move about stability.”

Romano said the state’s bonding debt and its unfunded pension liability grew during decades when Democrats, more often than not, controlled the General Assembly, even if the state had Republican governors for 16 years before Malloy took office in January 2011.

The focus on 2016 will be on the legislature, where Republicans have grown in six years from 37 members in the House to 64, a dozen shy of a majority. They are outnumbered in the Senate, 21 to 15. Romano said the pitch will be to make change now and not wait for the gubernatorial election in 2018.

“Not only do we need the governor, we need the legislature,” Romano said. “Otherwise it will not mean anything.”

Malloy, who is not on the ballot, intends to counter with the story he has been telling in campaign-style stops in recent weeks: Connecticut has recovered all private-sector jobs lost in the Great Recession, wages are up and unemployment is down.

Left unclear Wednesday is what Malloy will propose during the 2016 session that begins next month to reinforce that message — or whether any of it will reflect lessons learned in negotiating with GE.

“We’re in the midst of making final decisions on some of our proposals,” Malloy said. “I can assure you we will have a number of proposals on economic development issues, on transportation issues, on making sure we’re properly positioning the state.”