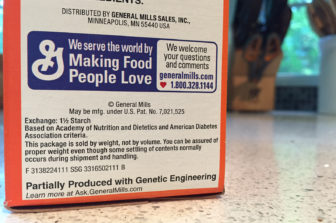 A GMO notice on the side of a box of Wheaties.

Washington – In a key procedural vote, the  U.S. Senate on Wednesday voted to pre-empt Connecticut’s genetically modified food labeling law, replacing it with a national food safety standard advocates say would be much weaker and not apply to many foods.

The Senate voted 65-32 to move toward final passage of a bill that would establish national regulations on the the contentious issue of  modified organisms in food, or GMOs. Its  sponsors, Sen. Pat Roberts, R-Kan., and Debbie Stabenow, D-Mich, call the legislation a compromise.

But the bill’s opponents, including Sens. Richard Blumenthal, D-Conn, and Chris Murphy, D-Conn., said the law would “insult” states that had passed more stringent regulations and would not disclose to consumers what’s in their food.

“There are clear defects in this law – the lack of a clear and stringent standard for labeling, the lack of enforcement, and the lack of transparency,” Blumenthal said.

The Roberts-Stabenow bill would create a mandatory labeling regime for food made with genetically modified organisms. Food makers would be required to either print a text message on the package disclosing whether a product contains GMO ingredients, or print a QR code or an internet link directing customers to GMO information not on the package.

Food safety advocates, who say they were caught off guard by the Senate’s action, have dubbed the bill the “Denying Americans the Right to Know (DARK) Act.”

The beef, pork, poultry and egg industries also successfully lobbied for an exemption. They opposed having their products labeled as containing GMOs when livestock has consumed genetically modified feed.

The compromise was fashioned after Senate Republicans in March failed to advance their own bill pre-empting state law and creating a voluntary national GMO label. Last year, the House passed a similar voluntary labeling bill.

The Roberts-Stabenow bill  would prohibit states, like Connecticut and Vermont, from imposing their own food labeling requirements.

“This bill is not a GMO-labeling bill. It’s anything but,” said Tara Cook-Littman of Fairfield, a food blogger who founded GMO Free CT. “It’s a bill that the industry has planted.”

More than 1,000 agribusinesses and food companies signed a letter in support of the bill. Having passed a key test Wednesday, the bill is expected to be approved in the Senate later this week. There are plans are to negotiate the Senate bill with the one calling for voluntary labeling that was passed by the House.

“It looks real bad,” said Cook-Littman, who is also head of the board of directors of Citizens for GMO Labeling. “But we’re not giving up hope.”

Vermont became the first state that would require clear, on-package labeling of GMOs, on July 1.

Vermont’s action prompted a number of food companies, including Mars, General Mills, Kellogg’s, ConAgra, and Campbell Soup, to put GMO labels on all of their packages. But it also resulted in Coca-Cola’s decision to pull some of its products off Vermont grocery shelves.

Cook-Littman said she was confident that after Vermont’s bill took effect, other states, including Connecticut, would implement their bills.

She said she was surprised the Senate is moving to overturn Vermont’s law and block implementation of similar laws in other states.

“We actually thought [Congress] was not going to do anything,” Cook-Littmann said.

In 2013, Connecticut became the first state to pass a law requiring GMO labeling, but the requirement was never implemented because of a trigger provision: four other states with a combined population of 20 million first have to adopt a similar standard before Connecticut’s law will take effect.

Maine has approved a GMO labeling bill and New York,  Massachusetts and other states are considering similar legislation.

The food industry and its allies say the moves by Vermont, Connecticut and other states will create a “patchwork” of regulations that would increase food prices and limit choices in states with GMO labeling laws.

“Unless we act now, Vermont law denigrating biotechnology and causing confusion in the marketplace is the law of the land,” Roberts said. “Our marketplace – both consumers and producers – needs a national biotechnology standard to avoid chaos in interstate commerce.”

The bill, however, is opposed by the Food and Drug Administration, which on June 27 sent a three-page letter detailing shortcomings.

One objection is that the bill would transfer food labeling oversight to the Department of Agriculture, which traditionally weighs in only on the labeling of meats and eggs, but which supports the Roberts-Stabenow bill.

The FDA also said the definition of “bioengineering” that would govern labeling under the new proposal “would result in a somewhat narrow scope of coverage,” meaning that it would not apply to many foods from genetically engineered sources.

Since genetically modified crops were first grown  20 years ago, use has skyrocketed, with 93 percent of soybeans and 85 percent of the corn crop planted in these seeds, according to the USDA. A recent National Academy of Sciences study showed that GMO crops are safe to eat.

Still, food safety advocates say consumers have the right to know what is in the food they eat.

“With a vote for this so-called ‘compromise’ bill, Congress would effectively be pulling transparent GMO labels from grocery stores, said Winona Hauter, executive director of Food & Water Watch. “This legislation is in effect a voluntary disclosure bill since there are no penalties for companies that decide not to comply with the mandate to provide even the most meager disclosure mechanisms.”