The rumbling sound heard in the distance last Monday was the Federal Railroad Administration shifting its position on where to route a high-speed rail line through Connecticut. After meeting heavy resistance, the agency now appears willing to modify its route in response to objections from Old Lyme and other historic coastal towns.

Neither were Right-to-Life supporters happy about Malloy’s proposal to insulate Planned Parenthood from any harm wrought by Republican efforts in Washington to defund the agency.

If it is any consolation to those opposed to gun control, the U.S. Senate rolled back a rule prompted by the Sandy Hook Elementary School massacre that required the Social Security Administration to turn over the names of mentally impaired recipients so they could be added to a list of people barred from purchasing a gun. 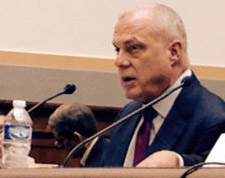 Loves me, loves me not

There was plenty of noise — and drama — in the insurance sector, too.

Aetna announced it will no longer pursue its proposed $37 billion merger with Humana following a federal judge’s ruling against it. Humana announced shortly afterward that it would pull out of the Affordable Care Act market, which, according to Mark Bertolini, Aetna’s CEO, is in a “death spiral.”

Indeed, the national ACA and Connecticut’s health insurance exchange are “at a critical crossroads,” Connecticut’s market director said. Changes at the IRS and congressional plans to repeal and replace Obamacare threaten to “unwind” the program, he said.

Right after the Aetna-Humana melt down, Cigna ended its plan to merge with Anthem and demanded $15 billion in compensation. Anthem responded by suing Cigna in an attempt to prevent the breakup and won a temporary stay from a judge in Delaware. The details of the suit were ugly and included charges of sabotage.

UnitedHealthcare’s charitable foundation, meanwhile, agreed to provide $2.35 million for projects intended to attack drug addiction and to reduce the state’s drug-overdose death rate. It has jumped 44 percent over the last three years. On the upside, Connecticut has one of the lowest rates of uninsured in the country. 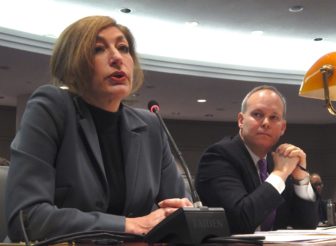 UConn President Susan Herbst testifies before the Appropriations Committee. Scott Jordan, the university’s budget chief, is seated next to her.

The state’s largest teachers’ union has begun a campaign against Malloy’s plans to redirect more state education aid to Connecticut’s most impoverished communities at the expense of other municipalities.

College leaders, meanwhile, are warning that the governor’s proposed budget cuts on their institutions could lead the University of Connecticut to slow hiring, reduce the number of majors and programs, and possibly eliminate some Division I sports.

In the worst-case scenario, the cuts threaten to put the Connecticut State College and University system into what CSCU President Mark Ojakian called a state of “financial exigency.” He has already imposed a hiring freeze.

Connecticut’s severe budgetary problems are already coming home to roost at the Office of the Chief Medical Examiner. It lost its full accreditation largely because of budget cuts.

The state’s hospitals also went on the political warpath, launching a campaign against the governor’s proposal to allow towns and cities to tax non-profit hospitals.

On the national scene, the week began with the resignation of National Security Advisor Michael Flynn over concerns that he spoke to Russian officials before President Donald Trump took office, then misled the vice president about it.

Reverberations were felt everywhere throughout the week, including off the coast of Connecticut, where there were reports of a Russian spy ship 30 miles offshore. Back in Washington, D.C., Connecticut legislators and others expressed concern that Vladimir Putin’s government is testing the new president.

“… the White House needs to move past their seeming infatuation with Putin and treat him like the serious threat to global peace and security that he has been for the last five years,” said U.S. Rep. Joseph Courtney, D-2nd District.