Still reverberating from President Donald Trump’s unsupported claim that he was wire-tapped by Barack Obama during the 2016 election campaign, the nation began the week examining the potential impact of two major Republican initiatives.

Trump’s renewed plan to limit immigration from six Muslim-majority countries was a tempered version of the one that caused public protests around the nation and was set aside by a federal judge. Connecticut’s all-Democratic congressional delegation was not impressed with the new one, either, calling it, in U.S. Rep Elizabeth Esty’s words: “immoral, inhumane, and fundamentally un-American.”

The administration’s new approach to illegal immigrants also presents some practical problems for Connecticut. There are an estimated 22,000 children of undocumented immigrants living in the state, the Department of Children and Families reported. If their parents are deported, they could become wards of the state.

Depending on who you believe, the GOP’s new healthcare insurance proposal will either bring financial relief and more insurance options than the Affordable Care Act provides, as U.S. Speaker of the House Paul Ryan says; or, according to the Malloy administration, “there are clearly going to be tens of thousands of Connecticut residents who are left without access to affordable care.”

Data from the Kaiser Family Foundation suggests that there would be both winners and losers in Connecticut — the losers being the poor, the elderly and folks living in Fairfield County, where insurance is most expensive.

The new health law bill will also be problematic for the Dems if it includes defunding Planned Parenthood, a move opposed by 62 percent of Americans, according to the latest poll.

The insurance industry is mostly not commenting on the new “Obamacare Lite” as it undergoes analysis from all quarters. In committee, U.S. Rep. John Larson. D-1st District, railed against the bill and the hurried treatment it is receiving from the majority party.

Back in the Connecticut Capitol there was plenty of partisan rancor over the reappointment of State Supreme Court Justice Richard N. Palmer, author of high court decisions that striking down the death penalty and legalizing same-sex marriage. Connecticut’s first female U.S. Attorney Deirdre M. Daly, meanwhile, was dismissed Friday along with 45 other Obama administration appointees in other states.

There is little partisanship locally, however, over a proposed state law banning the use of so-called conversion therapy – a discredited practice of using aversion techniques such as electric shock to change a person’s sexual orientation. 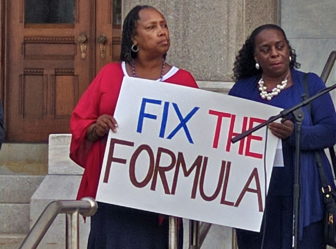 Certainly the legislature has more complicated and divisive issues to occupy its time, not the least of which is how to properly fund aid to Connecticut’s schools. There is a lot of budgetary pain to go around, but not much consensus on what to do. One new report from the University of Connecticut says that the state’s reform efforts have lacked coherence and have left districts scrambling to comply with constantly shifting expectations.

There is also considerable partisanship at play in whether to give Connecticut’s municipalities more time to adopt their local budgets. One thing has become clear on that front: the state’s municipalities want the governor to give up on his plan to have them pay one third their teacher pension costs — something that they say would have devastating impact on local property taxes.

Malloy, for his part, wants the legislature’s Republicans, who are pushing for an early budget adoption, to present their budget proposals so work can begin.

Some issues, of course, are so tricky they transcend party doctrine and loyalties. One such appears to be whether to allow the owners of the Millstone Nuclear Power Station to sell electricity to Connecticut’s utilities.

Another is  no doubt whether to expand casino gambling in north central Connecticut and, perhaps, in Fairfield County to tap the lucrative New York City market. With different opinions on all sides, one legislator thinks the state needs an independent analysis before it comes to any decision. The state’s economy, meanwhile, is in stasis, more or less.

Other issues may simply be out of Connecticut’s control: a federal move to roll back automotive emission standards, diminishing the state’s ability to meet its clean air goals.