Connecticut heads turned – no, whipped – toward Washington late Tuesday when word came that President Donald Trump had fired FBI Director James Comey, the man in charge of the agency’s investigation of possible ties between Trump administration and campaign associates and the Russian government.

Reaction from Connecticut’s all-Democratic Congressional delegation was swift and harsh: “Not since Watergate have our legal systems been so threatened, and our faith in the independence and integrity of those systems so shaken,” said Sen. Richard Blumenthal.

(The comment later drew a stream of  Twitter taunts from the president, who resurrected Blumenthal’s past misstatements about serving in Vietnam and then referred to the veteran senator as “Richie.”)

Watching Senator Richard Blumenthal speak of Comey is a joke. “Richie” devised one of the greatest military frauds in U.S. history. For….

The president couldn’t let the Comey thing go, and later in the week suggested the former director better not say anything derogatory about him because there might be “tapes” of their conversations. And if that’s the case, said Blumenthal, the Senate should obtain them “by subpoena or otherwise.”

Gov. Dannel Malloy, a staunch Hillary Clinton surrogate in the last election, couldn’t resist commenting publicly about the president, either, when he lowered his voice and asked: “Is anyone recording this?”

The Comey news perhaps lessened the aftershock of several state developments, among them the sting of the announcement that the state’s health insurers are asking for rate increases for individual and small-business policies averaging as much as 33.8 percent, with some policies running as high as 52 percent.

Democrats also were worrying about the fate of their year-old plan to set up a retirement savings plan for low-wage, private-sector workers. Its implementation delayed by Gov. Dannel Malloy, it may now be complicated by congressional Republicans who undid an Obama administration regulation governing the plans. 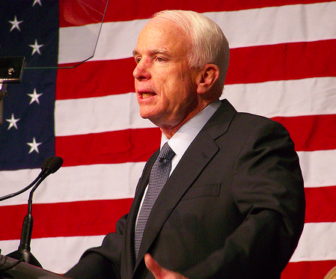 The Comey news also diverted attention, at least temporarily, from the advance of two controversial bills to the State Senate: one to permit the first casino off tribal lands, the other regarding the profitability of the Millstone Nuclear Power Station. (MGM Resorts’ position on the casino issue got some reinforcement from U.S. Sen. John McCain, R-Arizona.)

There is, of course, the lingering sting of the state government’s ongoing budget crisis – something legislators and Malloy were beginning to address Monday. By Thursday legislators from both parties were balking at Malloy’s proposal to help close this year’s budget shortfall by withholding $19 million in aid promised to municipalities. Senate Democrats, meanwhile, said their the plan for the long term should be for the state to stop relying so heavily on tax revenue from Connecticut’s wealthiest households, the relatively small group who pay their income tax quarterly on earnings from capital gains and dividends.

Borrowing is also becoming a painful exercise and political topic. Fitch Ratings Inc., downgraded the state’s credit rating from AA- to A+, about one month after Treasurer Denise L. Nappier warned the General Assembly it was likely to happen unless it changed its ways. The governor and legislators on the Bond Commission struggled, too, with how to navigate between $350 million in state needs and the obtaining the money to pay for them.

Meanwhile, town and city officials are beginning to ask why the state hasn’t delayed the third consecutive income tax cut for retired teachers nor offered ways to reduce the teacher pension costs Malloy wants the localities to help pay.

No wonder State Attorney General George Jepsen announced he has no interest in running for governor.

As difficult as the job is, it did have a few bright spots for the incumbent last week. Wednesday he nominated 13 lawyers as judges of the Superior Court, and then signed into law a popular bill that bans “conversion therapy,” the discredited practice of trying to change a minor’s sexual orientation.

There are plenty of other legislative issues to argue over, of course.

The House, for example, did finally decide what to do about ride-sharing companies Uber and Lyft that have been ignoring the state’s taxicab regulations.  It approved a measure that defines the companies as “transportation network companies” and sets standards for driver background checks, motor vehicle safety and insurance coverage.

Then there is the matter of fixing the state’s education funding system. And there probably will be some disagreement over whether a bill to loosen high school graduation standards is a step in the right direction. 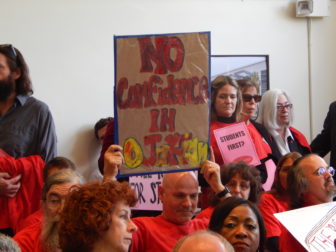 A faculty protester holds up a sign that reads, “No confidence in Ojakian.”

A budget-driven consolidation of the Connecticut State College and Universities is continuing much as an earlier attempt at one did — in the face of unhappy faculty members who complain President Mark Ojakian is leaving them out of the process.

There was a least one Connecticut family whose future seemed brighter — that of Luis Barrios, a Guatemalan native who has spent decades living in Derby. He was granted a two-year stay of deportation, which will give him time to pursue asylum in the United States.